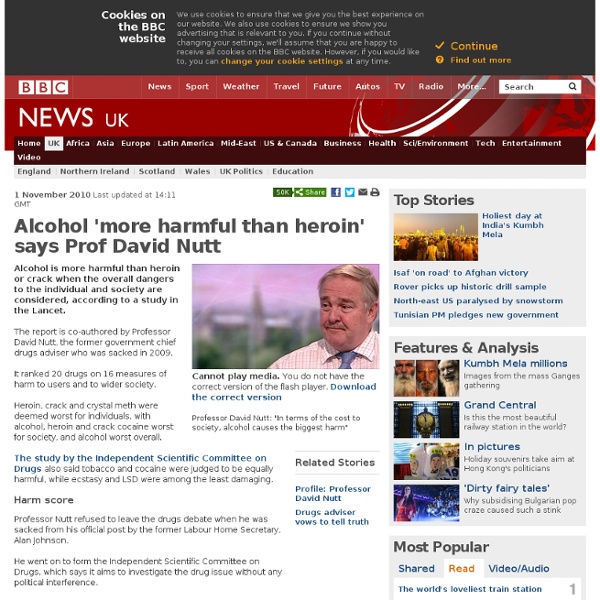 1 November 2010Last updated at 14:11 Professor David Nutt: "In terms of the cost to society, alcohol causes the biggest harm" Alcohol is more harmful than heroin or crack when the overall dangers to the individual and society are considered, according to a study in the Lancet. The report is co-authored by Professor David Nutt, the former government chief drugs adviser who was sacked in 2009. It ranked 20 drugs on 16 measures of harm to users and to wider society. Heroin, crack and crystal meth were deemed worst for individuals, with alcohol, heroin and crack cocaine worst for society, and alcohol worst overall. Harm score Professor Nutt refused to leave the drugs debate when he was sacked from his official post by the former Labour Home Secretary, Alan Johnson. He went on to form the Independent Scientific Committee on Drugs, which says it aims to investigate the drug issue without any political interference. 'Valid and necessary' 'Extraordinary lengths' "We are talking about a minority.

Wake Up and Dream In today's short, a man confronts a bully, and frees himself from a recurring nightmare that's terrorized him for more than 20 years. Matt Kielty introduces us to Steve Volk, a city reporter in Philadelphia who--for decades--was plagued by a recurring nightmare. It popped up whenever Steve was going through a stressful time, and it always played out exactly the same way. But no matter how self-aware Steve was about his most current set of anxieties, and no matter how hard he tried to rationalize and explain away the dream...he couldn't make it stop. Then one year, Steve started working on a book about topics at the edge of science, and along the way he stumbled into lucid dreaming. Read more: Fringe-ology, by Steve Volk Exploring the World of Lucid Dreaming, by Stephen LaBerge

Hallucinations with Oliver Sacks | World Science Festival Webcast Renowned neurologist Oliver Sacks answers your questions about the secret world of hallucinations. These queries came to us via Twitter, Facebook and e-mail. Q. Are the visual or auditory hallucinations in blind or deaf people analogous to sensations in a phantom limb? A. Q. A. Q. A. Q. A. truth: the Anti-drugwar The "Dangers" of Marijuana - StumbleUpon "The concern with marijuana is not born out of any culture-war mentality, but out of what the science tells us about the drug’s effects. And the science, though still evolving, is clear: marijuana use is harmful. It is associated with dependence, respiratory and mental illness, poor motor performance, and cognitive impairment, among other negative effects. We know that over 110,000 people who showed up voluntarily at treatment facilities in 2007 reported marijuana as their primary substance of abuse. Additionally, in 2008 marijuana was involved in 375,000 emergency visits nationwide. Several studies have shown that marijuana dependence is real and causes harm. Traveling the country, I’ve often heard from local treatment specialists that marijuana dependence is as a major problem at call-in centers offering help for people using drugs."

Mind-altering drugs research call from Prof David Nutt 23 January 2012Last updated at 21:12 By Pallab Ghosh Science correspondent, BBC News Could mind-altering drugs have a medical role? Former government drugs adviser Prof David Nutt has said that regulations should be relaxed to enable researchers to experiment on mind-altering drugs. Prof Nutt told BBC News that magic mushrooms, LSD, ecstasy, cannabis and mephedrone all have potential therapeutic applications. However, he said they were not being studied because of the restrictions placed on researching illegal drugs. He said the regulations were "overwhelming". His comments followed the publication of new research by his group in the Proceedings of the National Academy of Sciences, which suggests that the active ingredient in magic mushrooms could be used to treat depression. "I feel quite passionately that these drugs are profound drugs; they change the brain in a way that no other drugs do. Fired Continue reading the main story “Start Quote End QuoteProf David Nutt Medical role?

Doctors consider using street drugs to ease suffering of dying patients Recent studies at Harvard, U.C.L.A. and my alma mater John Hopkins have now made it plain that doctors should—as soon as proper safeguards can be put in place—be free to offer illicit drugs to patients who are terminally ill, in order to ease their emotional suffering and potentially offer them new perspectives—fueled by drug-induced insights—into issues like their own mortality. At Harvard, Dr. John Halpern (as reported in the New York Times) tested MDMA (the street drug Ecstasy) to determine if it would ease the anxieties in two patients with terminal cancer. The results are reportedly consistently good. The truth is that the likelihood of creating an MDMA or psilocybin addict out of a terminal cancer patient is exactly zero. Not long ago, I debated with former talk show host and motivational speaker Montel Williams. Terminal conditions and final days are, in fact, but one of the settings in which chemicals considered “street” drugs may be Godsends. Dr. Dr.

Remee - The REM enhancing Lucid Dreaming Mask by Bitbanger Labs Like Bitbanger Labs on Facebook Remee has been selected as a finalist for the William McShane Fund, by Buckyballs & Brookstone! If you think Remee deserves to be available at Brookstone, vote here! Yes, really! To us, this is kind of a shame, sort of like being unaware of the existence of books or music. This is an easy one. There's a lot more to Lucid Dreaming than simply acknowledging that it's real and crossing your fingers. Boom. Here's some great info for people new to the concept: WNYC's Radiolab - We've been listening to Radiolab for ages, so we thought it was great when they recently released a short about someone using lucid dreaming to overcome a recurring nightmare. /r/LucidDreaming - Reddit's active, knowledgeable, helpful Lucid Dreaming community. 25,000 dreamers strong and growing! Lucidipedia - A veritable treasure trove of information about the practice of lucid dreaming. In default mode, Remee targets these long chunks of REM sleep towards the end of the sleep period.

'Binge-drinking gene' discovered 3 December 2012Last updated at 19:56 ET Many genes may be involved in influencing how much we drink Scientists believe some people have a gene that hard-wires them for binge drinking by boosting levels of a happy brain chemical triggered by alcohol. The gene - RASGRF-2 - is one of many already suggested to be linked with problem drinking, PNAS journal reports. The King's College London team found animals lacking the gene had far less desire for alcohol than those with it. Brain scans of 663 teenage boys showed those with a version of the gene had heightened dopamine responses in tests. During a task designed to make them anticipate a reward, these 14-year-old boys had more activity in a part of the brain called the ventral striatum which is known to be involved in dopamine release. When the researchers later contacted the same boys at the age of 16 and asked them about their drinking habits, they found the boys with the 'culprit' variation on the RASGRF-2 gene drank more frequently.

The CIA's 5 Most Mind Blowing Experiments With LSD LSD has long been a staple of overweight, furry men with ponytails who list their occupation as 'Earth Shaman' on tax forms. The CIA is more typically known for their starched suits than their mind exploring orgies. So if we told you that the CIA was trippin' balls before Hunter S. Thompson even knew that balls existed, you'd probably call us liars. Well, prepare to have your mind, like, blown man. The CIA Discovers Acid, Experiments Like A (Evil) Teenager It all started in the early 1950s, when a double agent named Jozef Cardinal Mindszenty was tried for treason in Russia. "Can we get control of an individual to the point where he will do our bidding against his will and even against fundamental laws of nature, such as self preservation?" Rough translation: "Can we get someone so high that they'll kill themselves if we ask nicely enough?" Christ! "Ha ha! CIA Field Agents Drug Each Other for Fun "Okay, Frank. CIA-Run Brothels and Drughouses But you know what an even sweeter job title is?

The Forgetting Pill Erases Painful Memories Forever | Wired Magazine Photo: Dwight Eschliman Jeffrey Mitchell, a volunteer firefighter in the suburbs of Baltimore, came across the accident by chance: A car had smashed into a pickup truck loaded with metal pipes. Mitchell tried to help, but he saw at once that he was too late. The car had rear-ended the truck at high speed, sending a pipe through the windshield and into the chest of the passenger—a young bride returning home from her wedding. Mitchell couldn’t get the dead woman out of his mind; the tableau was stuck before his eyes. Pushing to remember a traumatic event soon after it occurs doesn’t unburden us—it reinforces the fear and stress. Miraculously, that worked. In recent years, CISD has become exceedingly popular, used by the US Department of Defense, the Federal Emergency Management Agency, the Israeli army, the United Nations, and the American Red Cross. Even though PTSD is triggered by a stressful incident, it is really a disease of memory. Mitchell was right about one thing, though.

Programmes | Newsnight | Rain in my heart - the filmmaker's view "My objective as a filmmaker was to record an alcoholic's journey" An alcoholic is a drunk for whom nothing can be done. Until, hopefully, a day arrives when they decide they want to get well. That day will come when they can go no deeper into the mire of self abuse. A day when there is only recovery available to them, or death. My objective as a filmmaker was to record an alcoholic's journey either to well being or a miserable death. In making Rain in my Heart I would need to film people with troubled psyches; people within which gremlins and monsters lurk producing psychological pain and miseries, miseries that often push them to self-harm. Some will slash their wrists and arms as a way to forget the mental pain. "Booze" becomes, for them, the only reliable medicine to quieten the monsters. An "alcohol dependency" that eventually obliterates the person within whom the untouched "gremlins and monsters" continue to exist. Convincing the carers I "knocked" on many hospital doors. Job done!

The Doors of Perception The Doors of Perception is a short book by Aldous Huxley, first published in 1954, detailing his experiences when taking mescaline. The book takes the form of Huxley's recollection of a mescaline trip that took place over the course of an afternoon, and takes its title from a phrase in William Blake's 1793 poem The Marriage of Heaven and Hell. Huxley recalls the insights he experienced, which range from the "purely aesthetic" to "sacramental vision".[1] He also incorporates later reflections on the experience and its meaning for art and religion. Background[edit] Mescaline (Peyote and San Pedro Cactus)[edit] Mescaline is the principal agent of the psychedelic cactus peyote and San Pedro cactus, which has been used in Native American religious ceremonies for thousands of years.[2] A German pharmacologist, Arthur Heffter, isolated the alkaloids in the peyote cactus in 1891. Peyote as entheogen drug[edit] Research by Humphry Osmond[edit] Huxley's experience with mescaline[edit] Synopsis[edit]