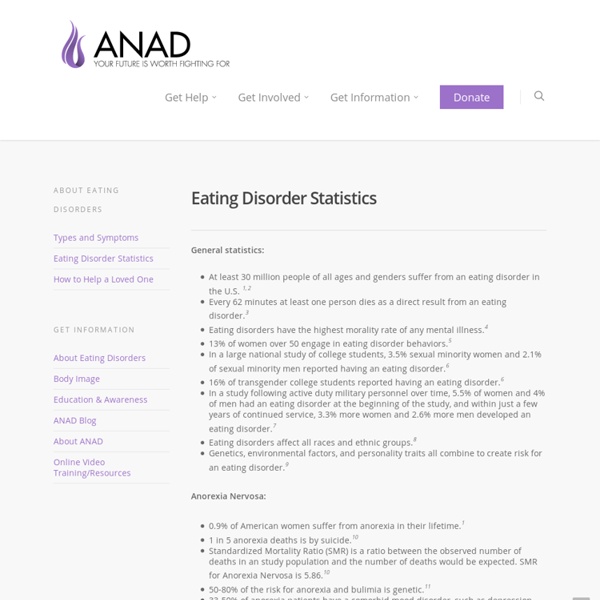 Instagram: The Good, The Bad, and The Ugly (Part 1) | National Eating Disorder Information Centre (NEDIC) Take a picture. Choose a digital filter. Write a caption. Upload. Now just wait for the "likes" and comments to roll in. These are the basic steps involved in successfully uploading a picture onto Instagram, a social networking service that allows iPhone and android users to take pictures and videos and share them with friends and other users on a variety of other social networking services such as Facebook, and Twitter. A recent trend in the Instagram world is the use of pictures and profiles as “thinspiration”. Instagram has taken some action in response the pro-eating disorder content that has been developing. So have these social media bans and restrictions been effective? For more information on this topic, see the following articles:

Statistics on Eating Disorders: Anorexia, Bulimia, Binge Eating — Eating Disorder Hope Eating disorders studies, statistics and research are surprisingly difficult to find. Occasionally you will find websites and articles that reference a few key studies, but they are few and far between outside of university or clinical journals and papers. We’ve put together some of the key statistics on eating disorders here for our readers. Anorexia Nervosa Statistics Anorexia Prevalence It is estimated that 1.0% to 4.2% of women have suffered from anorexia in their lifetime.[1] Anorexia Mortality Rates Anorexia has the highest fatality rate of any mental illness.[2]It is estimated that 4% of anorexic individuals die from complications of the disease[3] Access to Anorexia Treatment Only one third of individuals struggling with anorexia nervosa in the United States obtain treatment.[4] Bulimia Nervosa Statistics Bulimia Prevalence It is estimated that up to 4% of females in the United States will have bulimia during their lifetime[5]. Bulimia Mortality Rates Access to Bulimia Treatment References

Ever Do Something Just So You Can Post About It On Social Media? You're Not Alone | Bustle In largely unsurprising but all the same distressing findings from a new study, a third of Americans have done something — anything — just to post it on their social media. So that Swarm check-in at that gallery you didn’t even want to attend? Or that Instagram pic you snapped with that creepy actor whose movies you haven’t seen? We’re on to your social mobility cache, pal. Hand over the iPhone and consider wasting your time with something you actually enjoy. These stats come to you from a survey commissioned by ICON50, a program launched by the Ford Motor Company that explores the plausible evolution of pop culture as it “encourages Americans to rekindle their sense of adventure behind the wheel of the all-new Mustang.” But here’s the best part: we’re all on to each other’s b.s. Images: Giphy (2)

Meconnaissance: Who are we? | Critical Theory Lacan writes, “It is this moment that decisively tips the whole of human knowledge into mediatization through the desire of the other, constitutes its objects in an abstract equivalence by the co-operation of others, and turns the I into that apparatus for which every instinctual thrust constitutes a danger, even though it should correspond to a natural maturation…” (1289). The word meconnaissance is a French word meaning misrecognition, which Lacan uses to describe the illusion of the mirror stage. In other words, the infant sees his or her reflection as real, but the image is truly only an “imaginary mode”, as Gallop calls it. The Lacan quote above is fascinating because it describes not only how the mirror is a mediator of our concept of the “ ideal I”, but also talks about how others mediate our identity. These social norms, ideas, and perceptions of others become dangerous because our true self is then mediated through other people and society.

Why is women’s body image anxiety at such devastating levels? We need to talk about body image. New findings from the 2014 British Social Attitudes survey reveal that only 63% of women aged 18-34 and 57% of women aged 35-49 are satisfied with their appearance. In a world obsessed with women’s bodies, we are bombarded with images of them, usually undressed, often in dehumanised pieces, at every turn. But though we see women’s bodies everywhere, it’s only really one body that we’re seeing, over and over again. Funnily enough, that’s not what most women’s bodies look like. Unrealistic media ideals of female beauty have spawned a multitude of “body confidence” campaigns, but many, like the Sun’s recently launched No More Skinny, only seem to want to shift us from coveting one ideal to another. Confused? Worries about body image impact on both men and women – the BSA survey found that only three quarters of men are satisfied with their appearance.

Designing our own identities With the help of the internet we have never been freer to sculpt our own identities, project the self we wish to portray. But does this freedom come at a price? The product or service at the heart of any business – whether it’s communications, manufacturing or retail – is planned, produced and promoted by a team of specialists including of course a designer. We are told that purpose and function is at the heart of good design. In my experience working in digital communications, everyone in the team has an opinion about the design aspect of a product or service and many non-design jobs now demand you take an active role in some aspect of visual communication. And let’s face it, this isn’t surprising in a society that is saturated in visual communication. But what about the building of the ‘you’ that you want reaffirmed by selfies? Perhaps there is a sense of freedom, creative control and self-reliance in this process of identity building that adds some value to the experience.

Why older women should become the new selfie generation | Fashion If I mention the National Centre for Social Research I doubt you will be very thrilled, but bear with me. Tucked between percentages showing our plummeting faith in financial institutions and a touching belief in social mobility are some intriguing statistics on women and body confidence. It’s satisfying and uplifting to learn that 71% of women aged 50-64 are entirely happy with the way they look. That’s a whole 8% higher than the figure for women aged 18-34. I totted up my own selfies and there was one of my right eye (to show an eyeliner flick I was particularly proud of), one of me heavily disguised in a hat and dark glasses in France, and the one I took after my thrilling Illamasqua makeover (see main image). But I think there’s a deeper issue because whenever I do, say or tweet anything shamelessly self-promoting, I can sense my mother discreetly leaning over my shoulder to whisper: “Don’t show off, darling. So should older women be staking our own claim on the visible media map?

Rembrandt's lessons for the selfie era: why we must learn to look again | Technology Self-portraits have always reflected self-esteem. It was true in the Renaissance. It was true for Rembrandt, whose late works, which include many self-portraits, go on display in the National Gallery on Thursday. The current obsession with selfies – with makeup or without – reflects a surge in self-confidence that is both admirable and dangerous. A bid for immortality In the early Renaissance, the social status of the artist underwent a sea change. It is no surprise, then, that from the early Renaissance onward, artists began to make a bid for immortality. But the most telling sign, by far, of this growing self-possession was the new practice of self-portraiture – and when we think of self-portraiture, we naturally think of Rembrandt. A lifetime obsession Rembrandt leaves behind 80 renderings of his own image, between paintings, drawings and etchings. The sheer number of surviving self-portraits attests to a marked self-confidence on his part, and a desire to be immortalised. Our honesty?

Jeff Fromm: Millennials Are Rewriting the Future of Travel It is no secret that the millennial generation has been making headlines as the largest and arguably the most influential demographic in the United States today. These young adults, born between 1977 and 2000, are changing traditional marketing schemas as well as the way organizations are thinking about their brands. One industry that has been and will be greatly affected by this powerhouse generation is the travel industry. Since 1914, when the first commercial flight took off from St. Petersburg-Tampa, the travel industry has driven a wave of technological innovation. Millennial travel trends worth paying attention to: 1. When considering travel, millennials are almost twice as likely as non-millennials to book a vacation that includes outdoor adventure activities like mountain climbing, hiking, river rafting or camping. GoPro, a handheld “life proof” camera, has reinvented the way millennials are sharing their adventures. 2. 3. 4. Images: Purpose Generation, Futurecast

Fashion gets real: how the ordinary woman became this season's muse | Fashion There is a zeitgeist which rainbows over and above fashion. That news ticker which runs through your head – I should buy a shoe with a chunkier heel, is gingham over, how many shirt buttons to undo? – is only half the story. Pan out, right now, and this is what you find: fashion has tired of its ivory tower and fallen in love with reality. But this year, designers turned this upside down, switching their idolatry to the real world. So it was striking to walk into Tommy Hilfiger’s show and see a catwalk piled with snow and dotted with fir trees, and even more surprising when the models were dressed sensibly for their surroundings. New York fashion week faced up to the weather. The following day, at Christian Dior, Raf Simons radicalised the catwalk aesthetic by folding coats over the arms of the models, mirroring a look you see everywhere on the street but – until that moment – never at fashion’s high table. And then came the selfie.

Britain to arm Kurds fighting Isis in northern Iraq The UK is to directly arm Kurdish forces fighting Islamic State militants in Iraq and has sent a senior military officer to advise them, prior to what may be a larger Nato-led operation in the region. Britain has so far been a conduit for transporting non-lethal military equipment and ammunition sent by other countries, notably Albania, but has not itself sent firearms or munitions. On Wednesday, Britain delivered 10 tonnes of body armour, helmets and equipment. Albanian ammunition is needed since the Kurdish fighters have largely Russian-made hardware. Britain has been one of the last western countries to offer to arm the Kurds with similar decisions already taken by Italy, France, the US, Australia and some smaller countries. Downing Street also confirmed that Lt Gen Sir Simon Mayall, the Ministry of Defence's Middle East envoy, had arrived in Irbil to act as the direct representative of the prime minister.

Tonight: The Food We Eat - Can't Cook or Won't Cook? We’re a nation obsessed with cookery shows, recipe books and celebrity chefs. Yet it seems we're spending less time than ever doing it for real. One in five families eat convenience foods at least three times a week and a government survey showed only one in six mothers cook from scratch every day. In the first of four food programmes over the next fortnight, the Tonight programme investigates why some of us can’t cook or won’t cook and what can be done to get Britain back in the kitchen. The UK has the largest consumption of ready meals in Europe. It’s no surprise; they are cheap, convenient and easy. Mia Harris would love to rustle up her son Zac’s favourite meal, shepherd’s pie. “My mum wasn’t one for a lot of home cooking or cooking from scratch and it kind of fazes me, it kind of scares me. – Mia Harris Mia is not alone. What’s the answer? – Aldo Zilli Skills are not all you need though to get a home cooked meal on the table each night. “My life is hectic, it’s very busy. – Nigel Denby