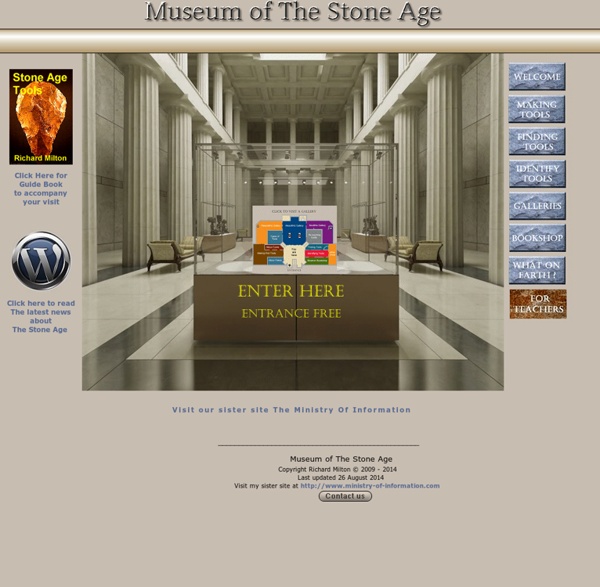 Course: Interactive History The Stone Age Archeological prehistory,is commonly divided chronologically into distinct periods, based on the development of tools from stone to bronze and iron, as well as changes in culture and climate that can be determined from the archeological record; but the boundaries of these periods are uncertain, and the changes between them gradual. The earliest inhabitants of Britain for whom there is compelling evidence are bands of hunters living in Southern and Western England during the Hoxnian interglacial (about 380,000 to 400,000 BC). (Some very recent excavations of stone tools on the East Anglian coastline suggest human presence as early as 700,000 years ago). However, as temperatures again dropped, Britain was abandoned. Some of the first things that Mesolithic Britons did, were to wipe out the lion, the elephant, and the hippopotamus, and to domesticate the dog. The Bronze Age There is no clear division between the Stone and the Bronze Age in Britain. The Iron Age

Stone Age teaching resources from the UK’s museums © Creswell Crags Stone Age teaching resources from the UK’s museumsA virtual Stone Age We love Virtually The Ice Age, the online learning resource from Creswell Crags (see photo above), where pupils can discover more about the Stone Age, including: Stone Age people, archaeology and excavation techniques, and the natural world. Don’t miss Could You have Survived The Ice Age? section with a quiz and more info about Stone Age art, camp sites and the tools Stone Age people used. Great images used too. More photos of Stone Age objectsExplore more Stone Age objects in the British Museum’s online collection. Show Me…Prehistoric Britain Our kids’ site Show Me has a Prehistory section with Stone Age-related activities and other resources for your class.The latest is a National Museums Scotland make your own wolf mask activity with a link to resources on author Michelle Paver’s Chronicles of Ancient Darkness book series.

List of Animals of the Stone Age | The Free Resource Email What Animals Lived During the Stone Age? The Stone Age was comprised of three dominant eras: the Paleolithic era, Mesolithic era, and the Neolithic era. What Weapons Were Used To Hunt These Animals The types of weapons carved out of stone give some insight into the types of animals that existed in different parts of the world. How Do Scientists Know What Animals Lived During The Stone Age To ascertain what animals existed during these times, a picture is created by looking at ancient art work, especially depicted on cave art. What emerges from the studies is that the animals were far from being close to any current images of today’s animals. List of Some of the Stone Age Animals The cave lion was an extremely huge predator, a kind of mix between a lion and tiger. The cave hyena also preyed on the same animals, as well as on bison, woolly mammoths and woolly rhino. Unlike the domesticated horse of today, the horse, Equus sp., of the Stone Age looked very different. Robert A.

San hunter-gatherer society in the Later Stone Age Lived off the environment The earliest hunter-gatherers in southern Africa were the San people. They mostly survived by hunting Gemsbok and other antelope and gathering plants. Hunter-gatherer societies hunt, fish and gather wild plants to survive. Sources: www.phiva.co.za The invention of the bow and arrow. The San invented their own type of bow and arrow in order to hunt effectively. It could take days of tracking before the animal collapses. Note to teachers: SAHO is still developing content for this section Social organisation The San built their dwellings from thin branches and long grass and could build a house in less than an hour. Hunter-gatherers did not live in permanent houses, but in shelters made of materials they could find around them, like thin branches and tall grass. The most important part of the San's lives is fire. The San's clothing was very simple and made from available materials like leather from the game they caught. Plant medicines San beliefs and religion Rock art

Sutton Hoo On a small hill above the river Deben in Suffolk is a strange-looking field, covered with grassy mounds of different sizes. For several hundred years what lay under them was a mystery. Then in 1938, an archaeologist called Basil Brown started digging under mounds 2, 3 and 4, where he found a few, mostly broken, Anglo-Saxon objects which had been buried alongside their owner's bodies. Sadly, grave robbers had taken most of what was there. He did not know that the treasures under Mound 1 would turn out to be the most amazing set of Anglo-Saxon objects ever found. Resources for teachers Using this tour as a starting point for enquiries: Download Sutton Hoo teachers' notes (30 Kb) Download a student activity sheet (49 Kb) Print and do activities Download an Anglo-Saxon recipe for chicken stew (121 Kb) From Mound 1, Sutton Hoo, Suffolk Anglo-Saxon Height: 31.8 cm Width: 21.5 cm Gift of Mrs E.M.

The only place in the UK where you can ride in a Lancaster Bomber - Lincolnshire Aviation Heritage Centre Prehistory - World 1 Web-Quests Your Task For each category answer all the questions listed. All of the answers can be found in the websites provided to you. Write your answers on the handout or you can download the file at the bottom of this page. Cave Art Go to the Lascaux cave site here.Click on “Visite la Grotte,” then “explorer" and watch.You should find at least seven different images.Explore the website further and then respond to the following questions on your answer sheet.Using the website images, your prior knowledge, and your deductive reasoning answer the following questions. Human Origin How long ago did humans begin to venture out of Africa (introduction)Between 200,000 and 60,000BCE, where had early man migrated? Out of Africa Migration Theory Click on the map below. How many years ago did hominids first migrate out of Africa? Ardie Watch the short video clip below about Ardie and answer the two questions. Who is Ardie? Laetoli footprints Watch is short clip and answer these questions. Lucy Stonehenge The Ice Age

3D Historical Virtual Tour | WWI Trench ​World War I Trench - 1917 ​​​​This World War I Trench scene illustrates some of the conditions soldiers of the Great War used to face from 1914 to 1918. In many cases, the front line hardly moved at all over the course of the war. In areas where fighting had been severe, it was not uncommon for many bodies to decay between the lines in No Man's Land. The stench of the front lines would greet soldiers on their way to the trenches miles before they ever got there. Rats, lice and disease were rampant among the trenches. Cave of Altamira and Paleolithic Cave Art of Northern Spain Cave of Altamira and Paleolithic Cave Art of Northern Spain Seventeen decorated caves of the Paleolithic age were inscribed as an extension to the Altamira Cave, inscribed in 1985. The property will now appear on the List as Cave of Altamira and Paleolithic Cave Art of Northern Spain. The property represents the apogee of Paleolithic cave art that developed across Europe, from the Urals to the Iberian Peninusula, from 35,000 to 11,000 BC. Because of their deep galleries, isolated from external climatic influences, these caves are particularly well preserved. The caves are inscribed as masterpieces of creative genius and as the humanity’s earliest accomplished art. Description is available under license CC-BY-SA IGO 3.0 Grotte d’Altamira et art rupestre paléolithique du nord de l’Espagne Dix-sept grottes ornées datant du Paléolithique ont été ajoutées en tant qu’ extension du site de la grotte d’Altamira, inscrit en 1985. Cueva de Altamira y arte rupestre paleolítico del norte de España

The Old Stone Age (Paleolithic Era) The Old Stone Age (Paleolithic Era) -from the beginning of human existence until around 12,000 years ago Why do we call this time in history the Stone Age? During this time humans used stone to make tools and stone was used many times as part of the actual tool. Tools are objects that make our lives easier. A computer or smart phone are examples of modern-day tools. Using a hammer stone for flaking. The first stone tools were used to meet people's three basic needs of food, shelter, and clothing. Flaking was one of the first uses of technology. Old Stone Age people hunt a sabre-toothed tiger; why are the spears considered composite tools? How do we know the age of artifacts? As far as we know today, people have only been writing about their experiences for about 7,000 years. There are three ways to determine the date of an artifact: Extraction: digging down through layers of earth, the deeper the object, the older it is. Woolly Mammoth herd Old Stone Age people were always on the move. Mr.