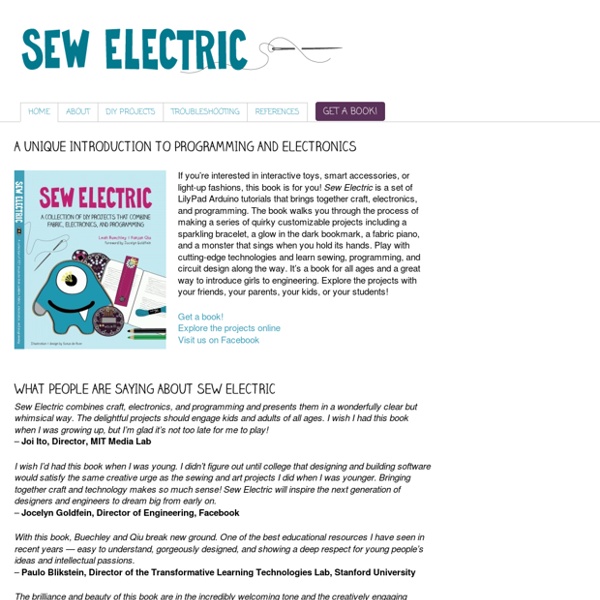 ISN - fiches d'activité liées au code FR The 10 Most Amazing Electronic Clothes Of the Century Computers? Clothes? What's the difference? Let’s face it, without the technology you use everyday you’d be pretty stuck. Need to make a big impression at a formal event? Why buy computerized clothing when you can make your own? Kanjun Qie from MIT Media Lab made a really cool sound-producing hoodie called the Soundie. Not useful enough? For those of us with a little electronics know-how the Arduino Lilypad is definitely a great option to make some kick-ass electronic-wear. Sports injuries can take years to overcome, and when you’re a professional athlete they can cost you a lot more than time. Also by Cute Circuit, the Hug Shirt stands on a basic premise: we all want to reach out and touch someone. The Hug Shirt lets you hug yourself and send a warm feeling to someone on the other side of the planet. ...This is a situation ripe for abuse. So maybe you want to put some electronics in your clothes, but you don’t want to do all the design yourself.

Arduino LilyPad for Clothing Overview The LilyPad Arduino is a microcontroller board designed for wearables and e-textiles. It can be sewn to fabric and similarly mounted power supplies, sensors and actuators with conductive thread. Downloads Schematic: LilyPad_schematic_v18.pdf EAGLE (CAD) Files: LilyPad_Board_v18.zip Summary Warning: Don't power the LilyPad Arduino with more than 5.5 volts, or plug the power in backwards: you'll kill it. Programming The LilyPad Arduino can be programmed with the Arduino software (download). The ATmega168V or ATmega328V on the Arduino LilyPad comes preburned with a bootloader that allows you to upload new code to it with the Arduino software. Power The LilyPad Arduino can be powered via the USB connection or with an external power supply. If an external power supply is used, it should provide between 2.7 and 5.5 volts. Physical Characteristics The LilyPad Arduino is a circle, approximately 50mm (2") in diameter. Washability Wash at your own risk - we do ;). More Information

Clothing Gets Computerized Sure those name brand threads may look good, but when was the last time they allowed you to become a walking sound and light show? The Soundie, part hoodie and part electric keyboard, is a build-it-yourself project now featured on the Instructables website. By touching the Soundie at different points and with different numbers of fingers, different pitches and lights will activate. Vary the amount of contact and you change the light and sound. It turns your hoodie into a musical instrument you can wear. Check out the video after the break. Can your hoodie play songs? The Soundie works by measuring voltage differences across special iron-on conductive fabric. Along with augmented reality video merging, and total-body interaction media, the Soundie is part of a larger trend of immersion technologies. But we’re totally skipping the other amazing part of the Soundie: it’s build it yourself! The Arduino LilyPad microcontroller board - sew cool!

CoderDojo : pleins de defis autour de la programmation CoderDojo, fundamentally is non-curriculum based. There is a multitude of excellent resources online for learning computer programming and we encourage all Dojos to use these in order to teach the basics and then focus the Dojo sessions on allowing the young people or 'CoderDojo Ninjas' to work creatively on projects of their own. Learn more information about the Guiding Principles and Philosophies of learning at CoderDojo. Topics covered at a Dojo is dependant on the Mentors who organised the Dojo and their technical skills combined with the interests of the young people attending. The focus is on guiding the young people with the basics and then facilitating them in creating their own, self led, projects. Scratch We recommend beginning with Scratch. The Scratch website also contains a lot of tutorials and sample projects and you can find much more on YouTube and through a Google search. Other Resources Open Badges Learning today happens everywhere, not just in the classroom. Dojo Game

OMsignal’s smart shirt monitors your emotional well-being A host of fitness tracking tech is currently on the market allowing users to measure and monitor their daily activities, heart rate, exercise intensity and even how much they sweat. But what about your emotional state? Montreal-based smart apparel company OMsignal has developed a T-shirt and a bra that not only tracks your daily steps, calorie burn and heart rate, but it also measures your breathing and emotional well-being using your heart rate variability, or HRV, reported VentureBeat. OMsignal's clothing contains a 3-axis accelerometer, the basic tool found in other fitness devices, which measures motion, steps and calories. It also detects and measures two other signals: your ECG—the electrical signature of your heart—and respiration rhythms. Sensors woven into the polyester/lycra fabric act as a 3-lead EKG, producing a readout of cardiac activity when the user is at rest or doing something active, according to the company. Photo: OMsignal/Marlon-Kuhnreich