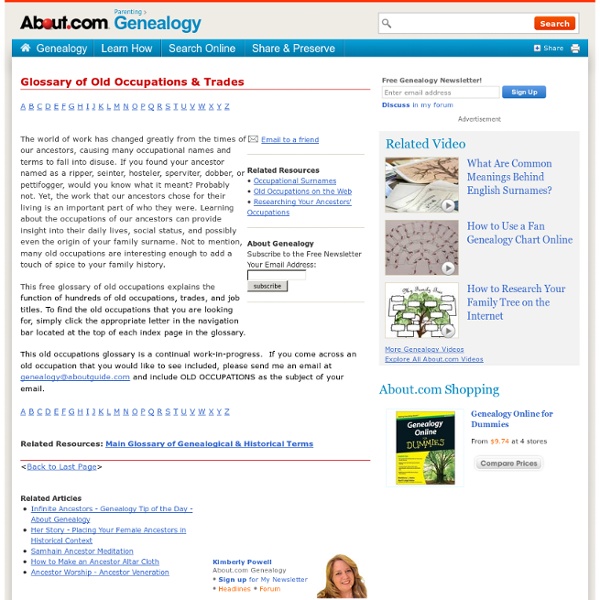 Glossary of Old Occupations & Trades The world of work has changed greatly from the times of our ancestors, causing many occupational names and terms to fall into disuse. If you found your ancestor named as a ripper, seinter, hosteler, sperviter, dobber, or pettifogger, would you know what it meant? Probably not. Yet, the work that our ancestors chose for their living is an important part of who they were. Learning about the occupations of our ancestors can provide insight into their daily lives, social status, and possibly even the origin of your family surname. This free glossary of old occupations explains the function of hundreds of old occupations, trades, and job titles. This old occupations glossary is a continual work-in-progress. Related Resources: Main Glossary of Genealogical & Historical Terms

Free Genealogy Search Advice Automated Genealogy GenealogyandFamilyHistory.com Historisch onderzoek begint hier USGenWeb Project Atlas of the Human Journey - The Genographic Project When humans first ventured out of Africa some 60,000 years ago, they left genetic footprints still visible today. By mapping the appearance and frequency of genetic markers in modern peoples, we create a picture of when and where ancient humans moved around the world. These great migrations eventually led the descendants of a small group of Africans to occupy even the farthest reaches of the Earth. Our species is an African one: Africa is where we first evolved, and where we have spent the majority of our time on Earth. According to the genetic and paleontological record, we only started to leave Africa between 60,000 and 70,000 years ago. Once the climate started to improve, after 70,000 years ago, we came back from this near-extinction event. Slightly later, a little after 50,000 years ago, a second group appears to have set out on an inland trek, leaving behind the certainties of life in the tropics to head out into the Middle East and southern Central Asia.