Which of the 11 American nations do you live in? 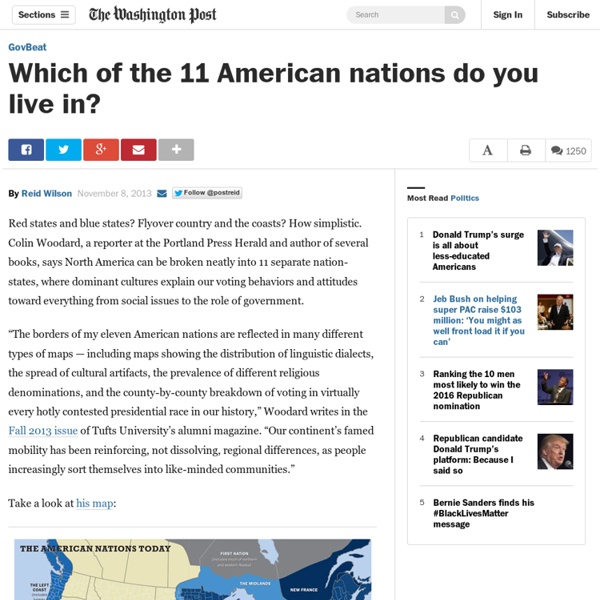 Red states and blue states? Flyover country and the coasts? How simplistic. Colin Woodard, a reporter at the Portland Press Herald and author of several books, says North America can be broken neatly into 11 separate nation-states, where dominant cultures explain our voting behaviors and attitudes toward everything from social issues to the role of government. “The borders of my eleven American nations are reflected in many different types of maps — including maps showing the distribution of linguistic dialects, the spread of cultural artifacts, the prevalence of different religious denominations, and the county-by-county breakdown of voting in virtually every hotly contested presidential race in our history,” Woodard writes in the Fall 2013 issue of Tufts University’s alumni magazine. “Our continent’s famed mobility has been reinforcing, not dissolving, regional differences, as people increasingly sort themselves into like-minded communities.” Take a look at his map:

North Korea Loses Its Link to the Internet SAN FRANCISCO — ’s already tenuous links to the Internet went completely dark on Monday after days of instability, in what Internet monitors described as one of the worst North Korean network failures in years. The loss of service came just days after President Obama pledged that the United States would launch a “proportional response” to the recent attacks on Sony Pictures, which government officials have linked to North Korea. While an attack on North Korea’s networks was suspected, there was no definitive evidence of it. Doug Madory, the director of Internet analysis at Dyn Research, an Internet performance management company, said that North Korean Internet access first became unstable late Friday.

Hillary Clinton email scandal: Explained. Photo by Win McNamee/Getty Images This post is being updated with more information as it becomes available. New questions will be marked with the date that they are added. Vote all you want. The secret government won’t change. The voters who put Barack Obama in office expected some big changes. From the NSA’s warrantless wiretapping to Guantanamo Bay to the Patriot Act, candidate Obama was a defender of civil liberties and privacy, promising a dramatically different approach from his predecessor. But six years into his administration, the Obama version of national security looks almost indistinguishable from the one he inherited. Guantanamo Bay remains open. The NSA has, if anything, become more aggressive in monitoring Americans. Drone strikes have escalated.

The Bible: So Misunderstood It's a Sin Religious rationalizers twist phrases and modify translations to prove they are honoring the Bible’s words. You’ve hit your limit of 5 free articles this month.Try our subscription options: Weekly home delivery with free shipping, access to Newsweek’s web site, and the complete online archive Access to Newsweek’s web site, and the complete online archive Muslim ninth grader arrested for bringing an electronics project to school Ahmed Mohamed is a ninth-grader in Irving, Texas, who likes to tinker with electronics. On Monday, according to the Dallas Morning News, he built a simple electronic clock — a project he said took about 20 minutes — and strapped it inside a pencil case. He showed the project to his engineering teacher, who praised the design but advised him not to show it to other teachers. Later, in Ahmed's English class, the clock beeped while it was in his bag. When he showed the project to his teacher, she thought it looked like a bomb. He insisted that the clock wasn't a bomb, but the authorities at the school weren't impressed:

Sex, power, and money: how a porn star took on web payments and won The trouble started with an infection. An actress named Eden Alexander had a bad drug reaction, which triggered a rare skin infection, building into a swarm of secondary illnesses. She needed to raise money for treatment. Bernie Sanders’s Dark Age Economics As of yesterday afternoon, a nonstop round-trip flight from New York City to Los Angeles on Independence Day weekend cost $484. That the price is so low is an incredible story in itself, one that is more important than most of what our children are taught in their history classes and one that we should not fail to appreciate, but it is a subject for another day. Consider, though, that that $484 is a messy number; it isn’t an even $500 or rounded to $480 or $485. Messy numbers are a sign of real calculation, and they are the opposite of political numbers: the first 100 days in office, the five-year plan, the $15 minimum wage. That $484 is easily expressed in non-U.S. dollar contexts: €445.08, £ 314.56, ¥ 5,9573.87, 2.0349 Bitcoin.

Think voting is for chumps? You might be interested in this system that some states are trying out. Elections in almost all states in our country come down to primaries, where the candidate who actually makes it onto the final ticket is chosen by a small percentage of people. In fact, in some states, you actually have to register for a specific party in order to vote in the primaries for given candidates. In other words, if you want to vote in the primaries for Party X, you have to be registered as a Party Xer.

Men and mass murder: What gender tells us about America's epidemic of gun violence Another week (or day) in America, another mass shooting. Another mass shooting, another flood of liberal attacks on gun culture, the Second Amendment, and the NRA. And another round of conservative pushback asserting some version of "guns don't kill people; people kill people." And another Barack Obama press conference railing at our failure to "do something" to stop the violence. All Politicians Lie. Some Lie More Than Others. Washington — I’m a political fact-checker, which is usually an automatic conversation starter at parties. These days, I get two questions repeatedly: “Is it worse than it’s ever been?” and “What’s up with Donald Trump?” I’ve been fact-checking since 2007, when The Tampa Bay Times founded PolitiFact as a new way to cover elections. We don’t check absolutely everything a candidate says, but focus on what catches our eye as significant, newsworthy or potentially influential. Our ratings are also not intended to be statistically representative but to show trends over time.

How Star Trek Explains The Decline Of Liberalism Leonard Nimoy’s death in February brought to a close his unusual career continually playing a single role for half a century. Between 1966, when the television show “Star Trek” premiered, and 2013, when the movie “Star Trek Into Darkness” hit the screens, Nimoy portrayed the franchise’s beloved first officer, Mr. Spock, in two TV series and eight films. As he acknowledged, the key to “Star Trek’s” longevity and cultural penetration was its seriousness of purpose, originally inspired by creator Gene Roddenberry’s science-fiction vision. Modeled on “Gulliver’s Travels,” the series was meant as an opportunity for social commentary, and it succeeded ingeniously, with episodes scripted by some of the era’s finest science-fiction writers. Yet the development of “Star Trek’s” moral and political tone over 50 years also traces the strange decline of American liberalism since the Kennedy era.

President Obama's boldest action on guns yet, explained After high-profile mass shootings, President Barack Obama has urged the American people to call on Congress to pass measures that would restrict access to guns and, hopefully, reduce gun violence. But after multiple pleas, Congress hasn't acted, even after the grisly mass shooting at Sandy Hook Elementary School in December 2012. So Obama is now acting on his own — with executive actions. "Every single year, more than 30,000 Americans have their lives cut short by guns," Obama said at a press conference on Tuesday. "We are the only advanced country on Earth that sees this kind of mass violence erupt with this kind of frequency." Obama met with Attorney General Loretta Lynch on Monday to consider what he can do without congressional legislation to reduce gun violence in America, which kills many more people in the US than other developed nations.