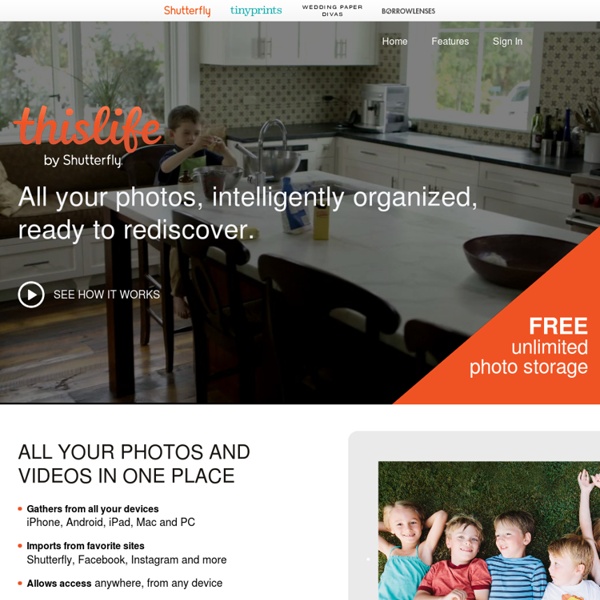 Best Organizational and Decluttering Websites There a lot of websites whose sole mission is to get you more organized and decluttered. Some are downright irritating in their pedantic perkiness and perfectionism. But others are actually decent. In fact, some are downright funny and really quite helpful! Here is a sample of such sites. The Best Photo Sharing Sites Digital cameras and smartphones mean that most of us have a ton of photos scattered everywhere from phones and computer hard drives to Facebook and Instagram profiles. But what happens when you switch phones, upgrade computers, or simply want to search all your photos at once? Uploading pictures to a photo sharing site is a simple way to answer all those questions—and the services offer lots of other benefits, as well. You can organize large photo collections, make it easier for friends and family to contribute to shared albums and ensure your pictures stay with you no matter what device they came from.

New Eye Drops Can Dissolve Cataracts With No Need For Surgery A cataract is the clouding of the eye’s lens and accounts for over half of all cases of blindness worldwide. Though cataracts can be effectively treated with surgery, it’s costly and requires trained surgeons. This is a problem for developing countries with poor health systems. Drug treatments have the potential to be a game changer in providing cheap and accessible treatment, but there are many hurdles. A new study that used eye drops to shrink cataracts in dogs may have made an important step in overcoming them. The vast majority of cataracts are age related, but some can develop the condition as a result of an injury or a genetic defect.

Use Tech to Get Organized: The 100 Best Tools, Websites, Apps and More This post is #3 in DailyTekk’s famous Top 100 series which explores the best startups, gadgets, apps, websites and services in a given category. Total items listed: 100. Time to compile: 8+ hours. Follow @DailyTekk on Twitter to make sure you don’t miss a week! As an IT Director, I can personally appreciate how hard it can be to stay organized in today’s world. Fortunately, I’ve been able to find and utilize some incredibly helpful technology to keep my life in order.

Facebook Moments vs Google Photos Shared Album “Dude… create a WhatsApp group and send in all the photos of the trip for everyone to download.” More or less, that’s what we say to our friend while attending an event or a holiday together when we have multiple smartphones to shoot pictures with. But we all know how these groups become more of a headache after the deed’s done. You can’t exit the group as it looks rude and you have to reply to occasional greetings and jokes sent there. Well, Facebook addressed the issue a few months back with a brilliant idea. They came up with an app called Facebook Moments using which friends can collaborate and send photos privately without compromising on photo quality and the face detection algorithm streamlines everything. IT can kill cancer Share this information first and read afterwards… Share it as much as you can! The Sour Sop or the fruit from the graviola tree is a miraculous natural cancer cell killer 10,000 times stronger than Chemo. Why are we not aware of this? Its because some big corporation want to make back their money spent on years of research by trying to make a synthetic version of it for sale. So, since you know it now you can help a friend in need by letting him know or just drink some sour sop juice yourself as prevention from time to time.

The 5 Best Organizing Websites To Help The Perpetually Messy Some of us were born with the "organized" gene. These lucky souls swan through life with perfect closets, pristine desks and spotless cars with nary a wad of Starbucks napkins tucked in an unexpected pocket. They might be robots. How to get your pictures out of Facebook and into Google Photos Facebook basically does the bare minimum when it comes to giving you your photos back, and that's really unfortunate. Most of us have a lot of photos in Facebook, but don't actually use that platform as a long-term storage solution. That's probably a good idea considering how photos are handled on the service, and making the move to something like Google Photos instead is something to consider. Unfortunately the data export tools for Facebook are pretty bad, leaving you with lots of issues when it comes to getting every photo out of the service and over to something new. But there's no better time to get this done than now, and we're going to explain all of the caveats related to getting your photos from Facebook to Google Photos. Getting photos from Facebook