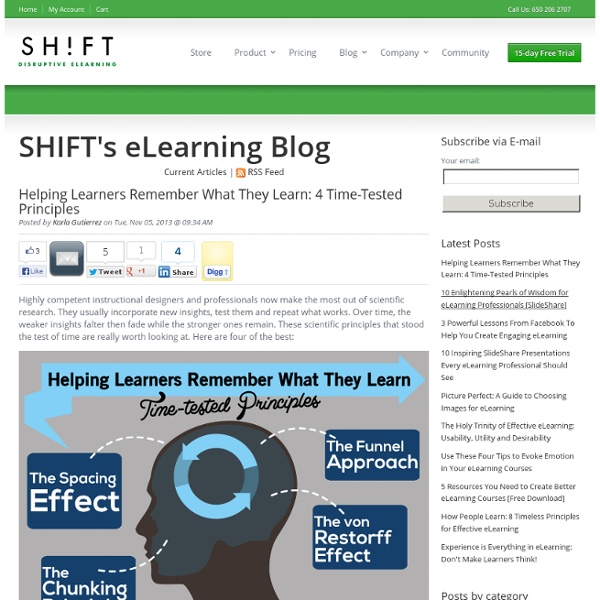 Helping Learners Remember What They Learn: 4 Time-Tested Principles Highly competent instructional designers and professionals now make the most out of scientific research. They usually incorporate new insights, test them and repeat what works. Over time, the weaker insights falter then fade while the stronger ones remain. These scientific principles that stood the test of time are really worth looking at. Here are four of the best: 1) The Spacing Effect In 1885, psychologist Hermann Ebbinghaus found that people forget a whopping 80% of material they recently learned within 24 hours. It's much harder to retain meaningless information.It's much easier to re-learn material than the first time.Learners will experience great success by spreading out their study sessions over time, not by engaging in one-night cram sessions.Instructors and designers can help learners store information in the long-term memory by repeating instruction and spacing it out over time. Focus on Longer Spacings

Mastery Learning and Content Creation on the iPad By Heather Parris-Fitzpatrick In this era of testing , it’s a good time to reflect on the elements of Mastery Learning as an instructional model and see how it may benefit the 21st century English Language Learner. ESL students of every proficiency level can benefit from this approach. ELLs routinely participate in standardized assessments that are designed for native language speakers. Oftentimes these students cannot accurately demonstrate their mastery of a topic without yet having mastery of the English language.

How Technology Wires the Learning Brain Kids between the ages of 8 and 18 spend 11.5 hours a day using technology — whether that’s computers, television, mobile phones, or video games – and usually more than one at a time. That’s a big chunk of their 15 or 16 waking hours. But does that spell doom for the next generation? Not necessarily, according to Dr. Gary Small, a neuroscientist and professor at UCLA, who spoke at the Learning & the Brain Conference last week. “Young people are born into technology, and they’re used to using it 24/7,” Small said. How to Tie Scouting Knots Scouting Knots Welcome to Scouting Knots These animated knots are described for scouts, but most of them have critical uses in other environments. Select the knots from: the index above left; the pictures above; or the Scouting Requirements page which provides details of the knots expected for advancement and different activities. Selection The selection of knots is based on consultation with many scouting leaders and a review of the requirements by some national organizations.

PEEL project for enhancing effective learning The Project for Enhancing Effective Learning (PEEL) was founded in 1985 by a group of teachers and academics who shared concerns about the prevalence of passive, unreflective, dependent student learning, even in apparently successful lessons. They set out to research classroom approaches that would stimulate and support student learning that was more informed, purposeful, intellectually active, independent and metacognitive. The project was unfunded and not a result of any system or institution-level initiative. PEEL teachers agree to meet on a regular basis, in their own time, to share and analyse experiences, ideas and new practices. The original project was intended to run for two years at one (secondary) school, however the process of collaborative action-research, the developments of so many new ideas for practice and the changes in classroom environment all proved very rewarding for the teachers. How does PEEL work?

Beyond the Comfort Zone: 6 Ways to Build Independent Thinking Image credit: iStockphoto The shift toward applying more executive function (EF) within learning and assessment will cause some discomfort in teachers and students. The transition will not eliminate the need for memorization, as automatic use of foundational knowledge is the toolkit for the executive functions. Memorization, however, will not be adequate as meaningful learning becomes more about applying, communicating and supporting what one knows. One way you can help your students shift from blindly following instructions and memorizing single right answers is to help them recognize their successful use of executive functions throughout their learning experiences. Start by going through your units of instruction and assessments to recognize where students have previously activated their EFs so that you can review these accomplishments as they are achieved in subsequent units.

What Happens To Your Body Within An Hour Of Drinking A Coke Don’t drink cola if you want to be healthy. Consuming soft drinks is bad for so many reasons that science cannot even state all the consequences. If you do drink soft drinks, as well as other sugary foods, you need the two products listed at the bottom of this article. One thing we know for sure is that drinking Coke, as a representative of soft drinks, wreaks havoc on the human organism. What happens? Writer Wade Meredith has shown the quick progression of Coke’s assault. The Key To Learning: Knowing How Learning Works What’s the key to effective learning? One intriguing body of research suggests a rather riddle-like answer: It’s not just what you know. It’s what you know about what you know. To put it in more straightforward terms, anytime a student learns, he or she has to bring in two kinds of prior knowledge: knowledge about the subject at hand (say, mathematics or history) and knowledge about how learning works. Parents and educators are pretty good at imparting the first kind of knowledge. We’re comfortable talking about concrete information: names, dates, numbers, facts.

US Army's Soldier Radio Waveform demonstrated on Raytheon's next gen air and ground radios In a key milestone, Raytheon has demonstrated the Soldier Radio Waveform (SRW) on its new class of airborne and ground radio terminals, providing soldiers with another way to communicate across disparate networks. During the demonstration, users were able to send voice and data traffic between Raytheon's terminal and another soldier radio running SRW. Raytheon is moving through the Department of Defense's Joint Tactical Networking Center's (JTNC) certification process for waveform conformance, and the company plans to be at upcoming interoperability tests with the government. In addition to SRW, Raytheon's tactical radios already have the Next Generation Mobile Ad Hoc Networking Waveform (NMW), specifically designed to run on lower cost, reduced size and lower power-consumption radios, while delivering much-needed wideband networking capability.