This Recently Married Man Just Realized Marriage Is Not For Him 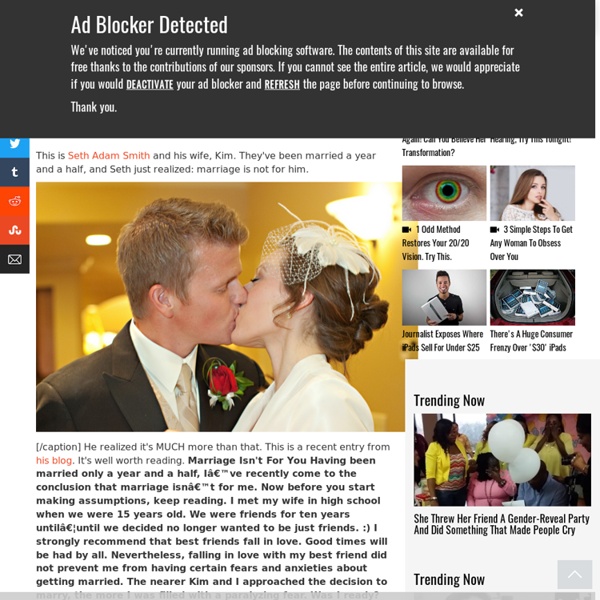 This is Seth Adam Smith and his wife, Kim. They've been married a year and a half, and Seth just realized: marriage is not for him. [/caption] He realized it's MUCH more than that.

Dr Bronner's acid-dropping, Burner CEO profiled Mike from Mother Jones writes, "Josh Harkinson profiles David Bronner, the 40-year-old, hallucinogen-dropping, Burning Man-attending scion of the Dr. Bronner's soap empire, who channels roughly half of the company's substantial profits into activism, including the Washington State GMO-labeling bill that voters will decide upon tomorrow. Bronner, who favors the labeling of foods with GMO ingredients, has been arrested for planting hemp seeds on the DEA's lawn and for a performance-art protest where he milled hemp seeds in a cage outside the White House. He also sued the DEA (and won), so that his company could legally obtain hemp oil as a soap ingredient. At first, David Bronner (Jim's son) wasn't sure he wanted to become the next standard-bearer for the soap-making clan. How Dr.

This Is What New York City Could Look Like In 2033 Architectural renderings allow us to peer into the future of our beloved city without a crystal ball. New York City has some big changes coming, and here are 17 future attractions that will transform the Big Apple as we know it. 1. The New Penn Station This summer a multibillion dollar plan will finally get underway to brighten up the dank rail station and better accommodate the 600,000 people that pass through it each day. Before: After: 2. The 1,776-foot Freedom Tower is slated for completion in early 2014, but construction on the surrounding skyscrapers, a performing arts center and a transportation hub are ongoing. 3. After more than a decade of controversy -- including scrapped Olympic and Jets stadium plans -- developers have crafted an ambitious plan to convert 26 acres of rail facilities into the largest private real estate development in city history. 4. 5 Pointz ... 6. 7. 8. 9. The Whitney Museum of American Art is relocating from the Upper East Side to the Meatpacking District.

Book review: Top Secret. Images from the Stasi Archives Top Secret: Images from the Stasi Archives, by Simon Menner. Available on Amazon UK and soon on Amazon USA Publisher Hatje Cantz writes: First publication of pictures from the archives of the Stasi, the East German secret police Almost 300,000 people worked for the East German secret police, per capita far more than were employed by agencies such as the CIA or the KGB. Close combat. Surveillance of Mailboxes Surveillance of the United States Embassy Simon Menner has one of the most peculiar portfolios i've ever encountered. For one of his latest photo series, Menner spent 2 years searching through the Stasi archives, the majority of which were opened to the public shortly after the fall of the Berlin Wall. The Ministerium für Staatssicherheit (Department of State Security) of the former German Democratic Republic was one of the largest surveillance apparatuses in history and its record of citizens' intimate life was thorough and sinister. From a seminar on disguises Secret House Searches

UK cops officially detained David Miranda for thoughtcrime David Miranda is journalist Glenn Greenwald's boyfriend, but he's best known for being detained under the Section 7 of the UK Terrorism Act while changing planes at Heathrow. The cops held Miranda for nine hours, the maximum allowed under law, without access to counsel, using powers intended to allow the detention of people suspected of connections to terrorism. But it was clear to everyone that Miranda wasn't connected to terrorism -- rather, the UK establishment was attempting to intimidate people connected to the Snowden leaks through arbitrary detention and harassment. Now that Miranda's lawyers are chasing down the people responsible, we're getting a more detailed picture of the process that led up to Miranda's detention. Before a Section 7 detention takes place, British cops have to file a form called a Port Circular Notice, and several drafts of the Notice used to detain Miranda have come to light. In other words: thoughtcrime.

Deliverance's inbred banjo boy The dueling banjo scene in John Boorman's Deliverance (1972) is one of my favorite musical moments ever in a film. It's simultaneously delightful, funny, and deeply creepy. I watched the clip recently and decided to find out who played Lonnie, the young inbred fellow picking opposite Ronny Cox. The actor is Billy Redden from Rabun County, Georgia who was 15-years-old at the time. Redden was "discovered" during a casting call at his school in Clayton, Georgia. Redden's IMD profile says that for a time Redden gave "Deliverance Tours" along the Georgia river where the film was shot. Below, a video interview with Redden from last year. New Kepler analysis finds many Earth-like planets; total 3,500 exoplanets Although NASA's Kepler probe has entered a semi-retirement, discoveries from the data it collected continue. Scientists are currently gathered to discuss these results, and they held a press conference today to announce the latest haul. As of today, the Kepler team is adding 833 new exoplanet candidates to its existing haul, bringing the total up to over 3,500. So far, 90 percent of the candidates that have been checked have turned out to be real. The number of planets in the habitable zone has gone up to over 100. In conjunction with the press conference, PNAS is releasing a paper that performs an independent analysis of Sun-like stars. A status update Kepler spots planets by watching them transit in front of their host star. Based on the amount of light obscured, researchers can estimate the radius of the planet; the time between the transits lets them figure out the orbit. Today, to a large extent, was a status report. Looking for Earths

Beatcoin Is A Music Jukebox Hack Powered By Bitcoin Micropayments Why did music jukeboxes disappear? They were probably the first truly social experience around music, but then everybody stopped using them. Meet Beatcoin, a nifty hack that was presented onstage at the Disrupt Europe Hackathon. The team turned everyone’s phone into a jukebox. “What’s interesting about our hack and Bitcoins is that everything is purely virtual,” Meinhard Benn told me. First, you have to install the app on your Android phone or iPhone and plug it in to your stereo. Partiers can vote with their Bitcoin wallets. Don’t worry, you won’t get ruined by fighting for your favorite songs. Meinhard Benn, Johann Barbie, Callum MacDonald, Richard Flett and Franck Gotthold used Java for the back-end infrastructure that handles Bitcoin transactions and the Android app. When asked whether the team will do a hackathon again, they were enthusiastic.

Confessions of an American Drone Operator From the darkness of a box in the Nevada desert, he watched as three men trudged down a dirt road in Afghanistan. The box was kept cold—precisely sixty-eight degrees—and the only light inside came from the glow of monitors. The air smelled spectrally of stale sweat and cigarette smoke. On his console, the image showed the midwinter landscape of eastern Afghanistan’s Kunar Province—a palette of browns and grays, fields cut to stubble, dark forests climbing the rocky foothills of the Hindu Kush. He zoomed the camera in on the suspected insurgents, each dressed in traditional shalwar kameez, long shirts and baggy pants. He knew nothing else about them: not their names, not their thoughts, not the thousand mundane and profound details of their lives. He was told that they were carrying rifles on their shoulders, but for all he knew, they were shepherd’s staffs. It was quiet in the dark, cold box in the desert, except for the low hum of machines. That was Brandon Bryant’s first shot.