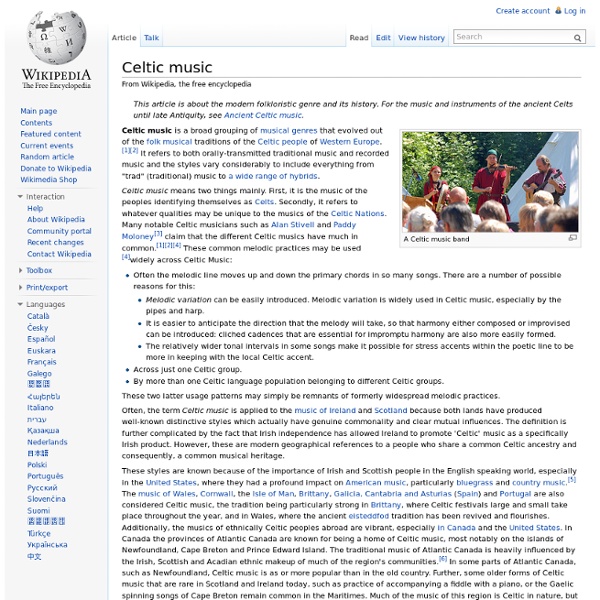 Celtic music is a broad grouping of musical genres that evolved out of the folk musical traditions of the Celtic people of Western Europe.[1][2] It refers to both orally-transmitted traditional music and recorded music and the styles vary considerably to include everything from "trad" (traditional) music to a wide range of hybrids. Often the melodic line moves up and down the primary chords in so many songs. There are a number of possible reasons for this: Melodic variation can be easily introduced. These two latter usage patterns may simply be remnants of formerly widespread melodic practices. Often, the term Celtic music is applied to the music of Ireland and Scotland because both lands have produced well-known distinctive styles which actually have genuine commonality and clear mutual influences. Divisions[edit] Alan Stivell at Nuremberg, Germany, 2007 Forms[edit] Festivals[edit] The Celtic music scene involves a large number of music festivals. Massed pipers at the Lorient festival

African Music - Music of Africa By Espie Estrella African Music Africa is a continent where a rich and diverse cultural heritage exists; hundreds of different languages are spoken in Africa. Musical Instruments The drum, played either by hand or by using sticks, is an important musical instrument in African culture. They use drums as a means of communication, in fact, much of their history and culture have been passed on for generations through music. The variety of musical instruments is as diverse as their culture. Singing and Dancing A singing technique called "call and response" is evident in African vocal music. continue reading below our video Loaded: 0% Progress: 0% This technique is still very much used in today's music, for example in gospel music. Dancing requires the movement of various body parts in time to the rhythm. For more information on African music visit our Go Africa website.

Music of Ireland The bodhrán, a traditional Irish drum. Irish Music is music that has been created in various genres on the island of Ireland. The indigenous music of the island is termed Irish traditional music. Early Irish music[edit] By the High and Late Medieval Era, the Irish annals were listing native musicians, such as the following: Modern interpretation[edit] Early Irish poetry and song has been translated into modern Irish and English by notable Irish poets, song collectors and musicians. Early Irish musicians abroad[edit] Some musicians were acclaimed in places beyond Ireland. Helias of Cologne (died 1040), is held to be the first to introduce Roman chant to Cologne. Donell Dubh Ó Cathail (c. 1560s-c.1660), was not only musician of Viscount Buttevant, but, with his uncle Donell Óge Ó Cathail, harper to Elizabeth I. Early Modern times[edit] Traditional music[edit] A traditional music session, known in Gaelic as a seisiún.

Celtic Music Instruments From the thump of the Bodhrán to the airy rasp of the wooden flute, celtic music is known by its instruments. Here's an introduction to the main players, with links to more information, for players and afficionados. Fiddle The fiddle is the mainstay of most Scottish and Irish music. Flute Flutes of one sort or another have been played in the celtic countries for over a thousand years. Tin Whistle (pennywhistle) The simplest and cheapest of traditional instruments, yet not so simple to master. More information: Ceolas Tin Whistle guide. Bagpipes & uilleann pipes Several forms of bagpipe are used in celtic music. The Scottish highland pipes are the loudest, played standing, usually in pipe bands. Bagpipe FAQ Bagpipe Web David Daye's Bagpipe site, for Scottish and uilleann pipes. Bombarde This is a small oboe-like shawm with a penetrating sound, used widely in Breton music. Free reed instruments This family of instruments was developed in the early nineteenth century. Banjo Bouzouki Website.

Uilleann Pipes, Chanters, Practice Pipes at Celtic-Instruments.com Traditional Celtic Music Uilleann pipes (pronounced ill-in) are a variety of bellows-blown bagpipes that is unique to Ireland. The word Uilleann is Irish for elbow, referring to the method used to play bellows-driven pipes. To fill the bag with air, the piper compresses the bellows by squeezing them between elbow and ribs. These pipes have many aliases, including elbow pipes, union pipes, and Irish pipes. Uilleanns—like Northumbrian smallpipes, Scottish smallpipes, and Border pipes—are quiet enough to be played indoors, unlike their mouth-blown cousins the Great Highland Bagpipes and Irish warpipes, which are for outdoor use only. Of the more than 200 types of bagpipes found across the globe, Uilleann pipes have earned a reputation as the most complex (and difficult to play) of all. Historical Notes At specific points in time, the history of the Uilleann pipes has moved in tandem with that of the Celtic harp. That Sweet Second Octave This range, however, causes a few problems of its own. The Bellows. The Bag.

About Japanese Music The earliest forms of music were drums and flute music accompanying the kagura shrine dances. From the 6th century on, music came from Korean and Chinese courts and monasteries and was performed at the Japanese court under the generic name gagaku (court music). The 8th-century court established a music bureau (gagakuryo) to be in charge of musical duties, both ritual and entertainment. The standard full-range gagaku ensemble has about 16 musicians on percussion, string, and reed instruments, the most distinctive being the free-reed mouth organ (sho), cyndrical oboe (hichiriki), the biwa lute, and the koto zither. Meanwhile with the introduction of Buddhism to Japan in the 6th century, Buddhist rites and liturgical chants gave rise to the development of a great variety of bells, gongs, wooden clappers, plaques, percussion tubes, and rattles, many of which found their way also into kabuki music of the Edo period (1600-1868).

Bluegrass Nation Old Time and Celtic songs are about whiskey, food and struggle. Bluegrass songs are about God, mother and the girl who did me wrong. If the girl isn’t dead by the third verse, it ain’t Bluegrass. If everyone dies, it’s Celtic. The Music Old Time and Celtic songs are about whiskey, food and struggle. Old Time and Celtic bands have nonsense names like “Flogging Molly’, “Fruit Jar Drinkers’ and “Skillet Lickers” while Bluegrass bands have serious gender-specific name like “Bluegrass Boys,’ “Clinch Mountain Boys’ and ”Backwoods Babes.” The most common Old Time keys are major and minor with only 5 notes (modal). A Bluegrass band has between 1 and 3 singers who are all singing about an octave above their natural vocal range. In a Celtic band, anyone who speaks during a performance gets “the look’, and songs are preceded by a call for silence and a detailed explanation of their cultural significance. The InstrumentsBanjo A Celtic banjo is small and quiet. Pete’s Placewww.bluegrasswest.com

List of Irish composers A list of composers from Ireland: A - E[edit] F - N[edit] O - Z[edit] Celtic Artists 1 + 351 - 59 Why is this #1? The Dubliners Folk music of Ireland, Irish rebel music ; 2 + 294 - 57 Why is this #2? The Chieftains Folk music of Ireland, Celtic music ; 3 + 571 - 191 Why is this #3? Music of Indonesia The music of Indonesia demonstrates its cultural diversity, the local musical creativity, as well as subsequent foreign musical influences that shaped contemporary music scenes of Indonesia. Nearly thousands of Indonesian islands having its own cultural and artistic history and character.[1] This results in hundreds of different forms of music, which often accompanies dance and theatre. Musical instruments[edit] Balinese gamelan performance. SambaSunda music performance, featuring traditional Sundanese music instruments such as kecapi, suling, and kendang. The musical identity of Indonesia as we know it today began as the Bronze Age culture migrated to the Indonesian archipelago in the 2nd-3rd century BC.[3] Traditional musics of Indonesian tribes often uses percussion instruments, especially gendang (drums) and gongs. Gamelan[edit] With the arrival of the Dutch colonizers, a number system called kepatihan was developed to record the music. Kecapi suling[edit] Main article: Kacapi suling