How Robots Will Change the World - BBC Documentary 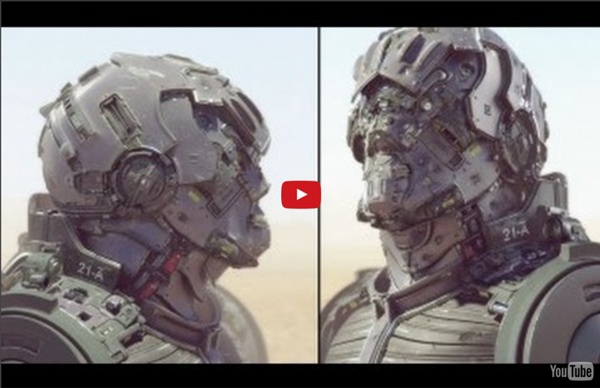 The bots of war 45inShare Jump To Close By the time the sun rose on Friday, December 19th, the Homestead Miami race track had been taken over by robots. It was the start of the Robotics Challenge Trials, a competition put on by the Defense Advanced Research Projects Agency (DARPA), the branch of the US Department of Defense dedicated to high risk, high reward technology projects. The eight robots that scored highest in the trials would go on to the finals next year, where they will compete for a $2 million grand prize. Mark Gubrud, a former nanophysicist and frumpy professor sort, fit right in with the geeky crowd. “DARPA’s trying to put a face on it, saying ‘this isn’t about killer robots or killer soldiers, this is about disaster response,’ but everybody knows what the real interest is,” he says. Around a year ago, the Department of Defense released directive 3000.09: "Autonomy in Weapons Systems." "It's a veto power that you have about a half-second to exercise. Autonomous robots by design Humanoid Land

Parker - Release Date January 25, 2013 Another box office bomb from hack director Taylor Hackford and failing fledgling movie studio FilmDistrict, (which will ultimately shutter by end of 2014, if not sooner). A thief with a unique code of professional ethics is double-crossed by his crew and left for dead. Assuming a new disguise and forming an unlikely alliance with a woman on the inside, he looks to hijack the score of the crew's latest heist. Director Taylor Hackford has had a bouncy 40 year career as a director. While he has directed movies constantly during the past four decades, less than a handful of his films have been bonafide hits. Among them An Officer And A Gentleman from 1982, Dolores Claiborne from 1995 and Ray from 2004. Taylor Hackford is actually most famous for being married to Oscar winner (The Queen) Helen Mirren. STARRING: Jason Statham, Jennifer Lopez DIRECTED BY: Taylor Hackford STUDIO: FilmDistrict RATING: R (For violence, language, adult themes) PARKER Official Website: www.parkermovie.com

Hansel And Gretel Witch Hunters Release Date January 25, 2013 In this dark spin on the fairy tale, siblings Hansel and Gretel are a formidable team of bounty hunters who track and kill witches all over the world. Catching up with Hansel and Gretel 15 years after their incident involving a gingerbread house, the siblings have evolved into bounty hunters who hunt witches. Jeremy Renner tries once again to headline a hopeful Hollywood box office blockbuster, of course, also in the requisite 3D. Hansel & Gretel: Witch Hunters is one of the worst movies of the past five years, according to Publisher of Wild About Movies, Tim Nasson. STARRING: Jeremy Renner, Gemma Arterton, Peter Stormare, Famke Janssen, Thomas Mann DIRECTED BY: Tommy Wirkola STUDIO: Paramount Pictures RATING: R (For violence, language, adult themes)

Die Hard 5 release date, movie poster, trailer, cast The fifth in the 25 year old big screen franchise starring Bruce Willis. Take-no-shit, Yipee-Ki-Yay-Mother-fucker cop John McClane for the first time finds himself on foreign soil after traveling to Moscow to help his wayward son Jack -- unaware that Jack is really a highly-trained CIA operative out to stop a nuclear weapons heist. With the Russian underworld in pursuit, and battling a countdown to war, the two McClanes discover their opposing methods make them unstoppable heroes. For once in recent memory a movie studio has made a smart decision; that releasing Die Hard 5, (as they had the previous film in the franchise, Die Hard 4), with a PG-13 rating, would amount to sacrilege to all who are wild about movies. We are 100% confident that they are 100% justified in their thinking. Had the fourth Die Hard movie been released with an R-ratings as the first three Die Hard movies were, it would have made a LOT more money at the movie box office.

You're Next Release Date August 23, 2013 - You're Next Trailer The movie You're Next was originally scheduled for release in 2011. It has had a two year shelf life, which in the world of Hollywood, is not a good thing, at least 99.9% of the time. When the Davison family comes under attack during their wedding anniversary getaway, the gang of mysterious killers soon learns that one of victims harbors a secret talent for fighting back. The movie features a cast of unknowns is has been dumped into one of the worst performing weekends at the movie box office. STARRING: Sharni Vinson, Ti West, Amy Seimetz, Joe Swanberg, Barbara Crampton DIRECTED BY: Adam Wingard STUDIO: Lionsgate RATING: R (For violence, language, rape) Below, the original You're Next movie posters.

The Wolverine Release Date July 26, 2013 - The Wolverine Trailer Based on the celebrated comic book arc, The Wolverine finds Logan, the eternal warrior and outsider, in Japan. There, samurai steel will clash with adamantium claw as Logan confronts a mysterious figure from his past in an epic battle that will leave him forever changed. From the director of the Oscar winning movies Walk The Line and Girl, Interrupted - and the box office bomb Knight & Day. STARRING: Hugh Jackman, Famke Janssen, Will Yun Lee, Tao Okamoto DIRECTED BY: James Mangold STUDIO: 20th Century Fox RATING: PG-13 (For violence, language, adult situations) THE WOLVERINE Official Website: www.thewolverinemovie.com Below, the Spanish poster for The Wolverine, with a slightly different title.

RIPD Trailer - RIPD Release Date July 19, 2013 RIPD tries to get a nearly full year jump on the Robocop remake, which has a similar plot. A recently slain cop joins a team of undead police officers working for the Rest in Peace Department and tries to find the man who murdered him. RIPD is one of two 2013 Movie releases that was filmed in Boston. The Heat, starring Sandra Bullock and Melissa McCarthy, was also filmed in Boston. While The Heat - which Wild About Movies saw on April 16, 2013, and loved - has a chance at becoming a huge box office hit, expect RIPD to be DOA. The trailer from RIPD, below, makes the movie look as if it will be fucking horrible. STARRING: Ryan Reynolds, Jeff Bridges, Kevin Bacon, Mary-Louise Parker DIRECTED BY: Robert Schwentke STUDIO: Universal Pictures RATING: PG-13 (For violence, language, adult situations)

Despicable Me 2 Release Date July 3, 2013 - Despicable Me 2 Trailer More minions. More despicable. Sequel to the 2010 animated hit comedy featuring Steve Carell as the voice of Gru, a supervillain who finds a family in three little orphaned girls who look at him and see something that no one else has ever seen: a Dad. Despicable Me 2 competes with The Lone Ranger for the top spot during the July 4th, 2013 weekend at the movies. Al Pacino threw a hissy fit and backed out of his voice role in Despicable Me 2 and was replaced by Benjamin Bratt. CLICK HERE to watch the DESPICABLE ME 2 Spanish Trailer. The Iceman - Release Date May 3, 2013 The true story of Richard Kuklinski, the notorious contract killer and family man. The Iceman is the electrifying true story of Richard Kuklinski (Academy Award nominee Michael Shannon, "Revolutionary Road"), notorious mob contract killer and loving family man. He earned his nick-name by freezing the bodies of his victims, disguising the time of death and throwing police off-track. He was a man who used his tendencies toward violence and detachment from consequence to create an idyllic family life. His family and neighbors believed he was an average businessman, having no idea about his deadly alternate life. Kuklinski killed over one hundred people during his life. The proof that the movie sucks is that it was picked up by a non-major studio, nor even a major-indie studio. The studio releasing The Iceman, Millennium Entertainment, is known for dumping movies in a very limited number of theaters for one week and then releasing on VOD and DVD soon thereafter.

Muscle Shoals In Movie Theaters September 27, 2013 Located alongside the Tennessee River, Muscle Shoals, Alabama is the unlikely breeding ground for some of America's most creative and defiant music. Under the spiritual influence of the 'Singing River' as Native Americans called it, the music of Muscle Shoals changed the world and sold millions upon millions of copies. At its heart is Rick Hall who founded FAME Studios. DIRECTED BY: Greg 'Freddy' Camalier STUDIO: Magnolia Pictures RATING: PG