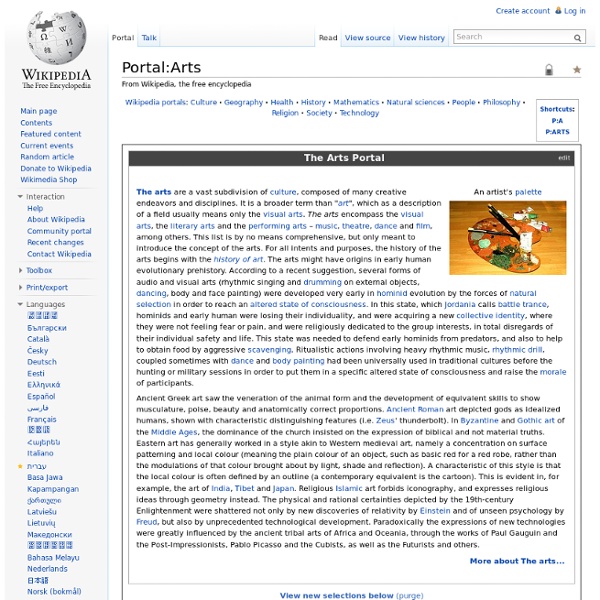 Uno de los nuestros Portal:Science edit The Science Portal Science is formed from methodical study of nature stemming from testable explanations and predictions. An older and closely related current meaning emerged from Aristotle, whereby "science" referred to the body of reliable knowledge that is logically and rationally explained (see "History and etymology" section below). Since classical antiquity, science as knowledge was closely linked to philosophy. In the early modern era the two words, "science" and "philosophy", were sometimes used interchangeably in the English language. Ever-evolving, "science" is, more modernly, a term referring to the pursuit of knowledge, and not the knowledge itself. Currently, there are both hard (e.g, biological psychology) and soft science (e.g., social psychology) fields within the discipline. Cite error: There are <ref> tags on this page, but the references will not show without a {{reflist}} template (see the help page).

Portal:Fashion Portal:Architecture Architecture is seldom a "pure art", like painting and sculpture, as the human interaction with a building is usually practical as well as aesthetic. Thus the architect must make sure that the design conforms with the purpose of the building, the legal requirements in the area, as well as the practical and cultural concerns of the people who will use it. For example, a private home might have one bathroom, used by both sexes, but cultural norms and local building codes may dictate that a public building have separate restrooms for men and women. So that his design will best serve the people who will use the building, the architect must take great care with such mundane matters as the efficient placement of heating and cooling ducts, plumbing for restrooms and kitchens, conduits for electrical and communication lines, etc. Her designs must also take into account the environment into which the building will be placed.

Draw As A Maniac the free encyclopedia Category:Art Cancel Edit Delete Preview revert Text of the note (may include Wiki markup) Could not save your note (edit conflict or other problem). Please copy the text in the edit box below and insert it manually by editing this page. Upon submitting the note will be published multi-licensed under the terms of the CC-BY-SA-3.0 license and of the GFDL, versions 1.2, 1.3, or any later version. Add a note Draw a rectangle onto the image above (press the left mouse button, then drag and release). Save To modify annotations, your browser needs to have the XMLHttpRequest object. [[MediaWiki talk:Gadget-ImageAnnotator.js|Adding image note]]$1 [[MediaWiki talk:Gadget-ImageAnnotator.js|Changing image note]]$1 [[MediaWiki talk:Gadget-ImageAnnotator.js|Removing image note]]$1

Portal:Portal From Wikipedia, the free encyclopedia Wikipedia portal contents page Portal has been acclaimed as one of the most original games in 2007 despite being comparatively short in length. The game has received praise for its unique gameplay and darkly humorous story (created with the assistance of Erik Wolpaw and Chet Faliszek of "Old Man Murray" fame), the character of GLaDOS (voiced by Ellen McLain), and the final credits song, "Still Alive" (written by Jonathan Coulton for the game). Wyndham Raymond Portal, 1st Viscount Portal PC GCMG DSO MVO (9 April 1885 – 6 May 1949) was a British politician. O Liberty, white Goddess! — Thomas Bailey Aldrich, Unguarded Gates Purge server cache

org - The First Art Newspaper on the Net Belief Belief is a mental representation, treated in various academic disciplines, especially philosophy and psychology, of a sentient being's attitude toward the likelihood or truth of something.[1] From Greek two different concepts are often represented by the concept of belief: Pistis and Doxa. Simplified we may say that the first deals in trust and confidence, the latter in opinion and acceptance. Knowledge and epistemology[edit] The terms belief and knowledge are used differently in philosophy. As a psychological phenomenon[edit] Mainstream psychology and related disciplines have traditionally treated belief as if it were the simplest form of mental representation and therefore one of the building blocks of conscious thought. The concept of belief presumes a subject (the believer) and an object of belief (the proposition). This has important implications for understanding the neuropsychology and neuroscience of belief. Belief-in[edit] Belief-that, delusion[edit] Formation[edit] Desirability