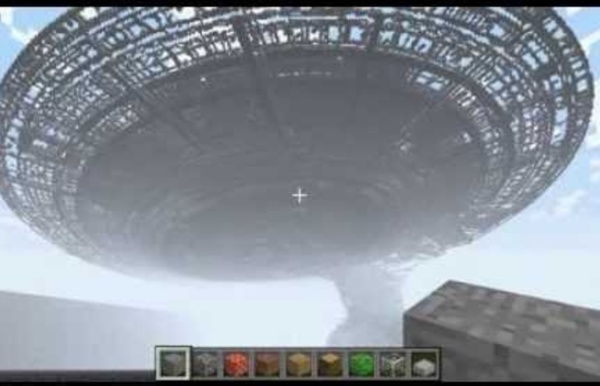 USS Enterprise Refit [UPDATED FEB3 + YOGSCAST!] 58oP0WJn3BM Download I originally built this ship on a SMP server and finished it about a month ago. It has a full interior, a wide compliment of tools and resources throughout the ship. Included in the download is the World folder, a set of Star Trek player skins, a .schematic file and a very basic "sci-fi" texture pack, you'll have to merge it with whatever custom pack you are using. Backlit Deflector dish The Bridge Transporter Room Captain's Quarters Senior Officer's Lounge Warp Core Engineering Control Cargo Bay Ship's Plaque (featuring a typo) The rest of the map is completely undeveloped. Because of a mess up on my part you either need to run a no cloud.png or set graphics to fast otherwise the clouds will be right on the saucer deck level. I don't have a lot of free time to support this level or skin pack so when new features come out you'll have to update the textures and items yourself. Here is the player skin-pack for those who just want that. Dr. Captain Kirk Mr. Spock LAWQ_cWJ7AA

ZooBorns: Fennec Fox Australia's Taronga Zoo welcomed three Fennec Fox infants, the first to be born to a new breeding pair from Europe. The kits, which are just starting to emerge from their nest box, were born on December 19, 2012, a year after the zoo introduced their parents, Zinder and Kibali, a new breeding couple from Europe. Carnivore Keeper Tamara Bell said, “Any new arrival is special, but what makes these Fennec kits even more important is that they’re the first offspring born to Zinder, the male who came from Germany, and Kebilli, the female from Poland. This means that these kits are not related to any of the Fennec Foxes here in Australia.” Photo Credit: Rick Stevens Aside from expanding the genetics in the Australasian region, the young Fennec Foxes have also provided a boost to the captive population of the species, which dropped to only six throughout Australia prior to 2010. Read more about the kits, and see more pictures, after the fold:

[Adv] The Redmurk Mystery The Redmurk Mystery Current version seems to work fine with Minecraft 1.1 from what I can see. If you spot anything; please let me know. Setting: You have arrived at the remote port town of Redmurk, surprisingly there appears to be no one around and further exploration reveals the town to be empty. Perhaps you should investigate? This is my first crack at an adventure map, so any criticism is appreciated. You can download it here Please post any feedback as well as your final score after completion. Installation: Unzip the files and place the Redmurk folder into \.minecraft\saves Rules: 1. 2. 3. 4. 5. Hope you enjoy it as much as I enjoyed making it. Videos: Edit: List was getting a little long so I just made a youtube account and added all I could see to Favourites: Huge thanks to all who made these videos! Version History: Spoiler: Fixed an issue with a sign that used the pre-release name of "Redmist". Fixed a typo on one of the story signs. v1.5 v1.6

Tsumami Kanzashi Flower Hair Clip I have recently discovered these beautiful folded flowers, and I absolutely cannot stop making them. Tsumami Kanzashi are traditional Japanese folded flowers, made from small squares of silk, that are typically worn by women as hair ornaments in traditional hairstyles. They seem really complicated and intricate, and they can certainly be that if you really want; but it completely doesn't need to be! I love to make them out of cotton prints that are fun and bright, in addition to scraps of silk and other light fabrics. These can be used in countless applications. There are a few tutorials out there on the internet, but to find a good variety in petal shapes can certainly be difficult, you just have to keep looking, and just grab a square of fabric and just test stuff out.

Herobrine Proof Hyperbole and a Half Packing all of your belongings into a U-Haul and then transporting them across several states is nearly as stressful and futile as trying to run away from lava in swim fins. I know this because my boyfriend Duncan and I moved from Montana to Oregon last month. But as harrowing as the move was for us, it was nothing compared to the confusion and insecurity our two dogs had to endure. Our first dog is - to put it delicately - simple-minded. Our other dog is a neurotic German shepherd mix with agonizingly low self-esteem who has taken on the role of "helper dog" for our simple dog. When we started packing, the helper dog knew immediately that something was going on. When the soul-penetrating pathos she was beaming at me failed to prevent me from continuing to put things in boxes, the helper dog became increasingly alarmed. Unfortunately for the helper dog, it took us nearly a week to get everything packed up. But the simple dog seemed to enjoy the trip. Even though she threw up seven times.

Minecraft : 7ème Ciel | Episode 4 File:ItemslistV110.png Minecraft : 7ème Ciel | Episode 3 Minecraft | BREWCRAFT! (Moonshine and Cider!) | Mod Showcase [1.4.7] [Adv] Forgotten Temple (v1.7 Final) Please also look at my new project - "Dimension of DooM". The Forgotten temple - Adventure type map. This map is one of the few adventure type maps available now. More then 130.000 downloads so far, more then 200 lets plays on youtube, the most known adventure map there is! This was one of the first ever created adventure/puzzle maps for minecraft (actually 3rd ). You can download current version here: (final version! This map Includes following: - Puzzles (whole lot of different ones) - Hidden stuff - Locked Doors - Switches and Buttons - High score counting system (FIRST EVER*) - Puzzles with minecarts - Lava - Jumping paths (optional) - Dispensers - Puzzles with sound blocks (!) How to install: Just put the folder "World4" into your minecraft save directory and then play like any normal world. Screenshots: Also: - Post your higscores after you finish playing! Copy this code and paste it into your signature to show support: WalktroughWarning!