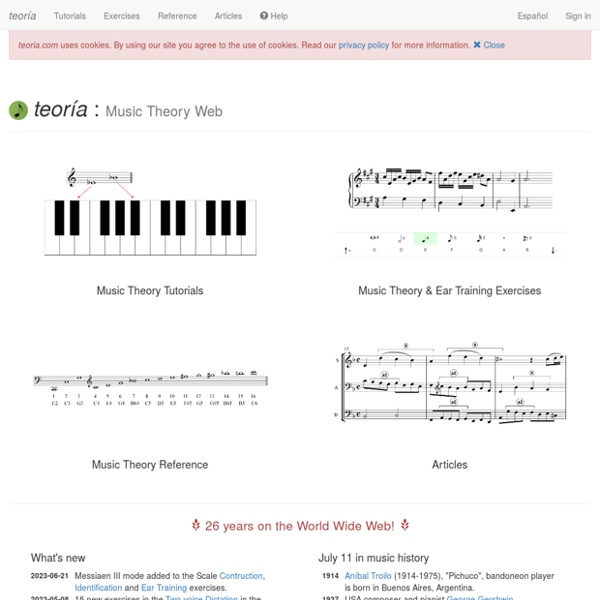 How to Write a Song (with 3 Sample Songs) Three Methods:Sample SongsListen to the MastersLearn the CraftCommunity Q&A From before King David, to the Reformation, to the colonization of the Americas, and into present times, music has been a big part of civilization. The process of creating music has evolved over time—we've developed more words, fine tuned melody, and stacks of Marshall amps that go to 11—but the urge to express ourselves in song remains as strong as ever.

How maths helps us understand why music moves people Music is known to provoke the senses, give pleasure and sometimes move people to tears. Surely this has little to do with mathematical models which are so frequently associated with cold and rational logic. So what can maths tell us about this powerful phenomenon closely connected to the emotions? Can mathematics help us measure what’s sublime or ineffable about a piece of music? How to construct chords - Piano Clues: Free tips and lessons for playing piano, organ and electronic keyboard You don’t need a “1000 Chords Dictionary” to be able to read and play chords. You can learn how to form chords on your own, because chords are built using simple formulas. A chord is three or more notes played at the same time. It’s as simple as that. Of course, the trick is to know which three notes… Obviously, not all combinations of notes sound good.

Free Online Voice Generator Free online voice generator. This voice synthesizer tool allows you to enter any text into the box and listen to a computer generated voice speaking the output. Different browsers and operating systems have different voices (typically including male and female voices and foreign accents), so look at the options in the dropdown box to see what voices are available. Music theory Music theory considers the practices and possibilities of music. It is generally derived from observation of how musicians and composers actually make music, but includes hypothetical speculation. Most commonly, the term describes the academic study and analysis of fundamental elements of music such as pitch, rhythm, harmony, and form, but also refers to descriptions, concepts, or beliefs related to music. Because of the ever-expanding conception of what constitutes music (see Definition of music), a more inclusive definition could be that music theory is the consideration of any sonic phenomena, including silence, as it relates to music.

Learning and Loving Music Theory Kelvin, You actually caught a mistake on the roman numerals! Thanks, I’ll have to fix that. The first and last chords of the progression are not 7th chords. Scales and emotions See also a post about making chords from scales. So maybe you want to write a song or an instrumental in a particular mood or style, and you’re feeling overwhelmed by all the scales. Here’s a handy guide to the commonly used scales in Western pop, rock, jazz, blues and so on. Click each image to play the scale right in your browser with the aQWERTYon. These scales have a major third (E in the key of C), which makes them feel happy or bright. Major scale

Online Ear Training with Intervals, Melodies, and Jazz Chord Progressions Play Mode controls what happens when you click play. Auto-mode, puts the player on a loop, delaying each loop for as long as desired. Check this box to immediately show the first note of the sequence as it plays. A different way to visualize rhythm - John Varney To learn more on circular perceptions of rhythm with specific reference to African music, read this paper and then watch this Five(ish) Minute Drum Lesson on African Drumming. How has drumming played an essential role in African culture? What do specific rhythms represent?

Best Quotes of All Time It’s been three years since we shared our original list of some of the best quotes of all time, and we felt it was a good time for an update. We’ve added another 25 quotes for you. But these aren’t just any quotes. These are quotes designed to inspire. They’re motivational quotes that will hopefully get you thinking about your life, your work, or your dreams and how you can make these things better. I know quotes researched online often come in slightly different variations, so if you’ve heard another version of one of these, please share it with us in the comments. Jazz Progressions Jazz Progressions are simply common chord progressions in jazz music. One of the most common progressions is the ii-V-I progression. The ii-V-I sounds at its best when you use seventh chords and their expanded voicings. As you already know from past lessons, the ii chord is a minor chord, the V chord is a dominant chord, and the I chord is a major chord. So the most basic Jazz progression is the ii minor 7 - V dominant 7 - I major 7. In the key of C, this progression is Dm7-G7-Cmaj7.