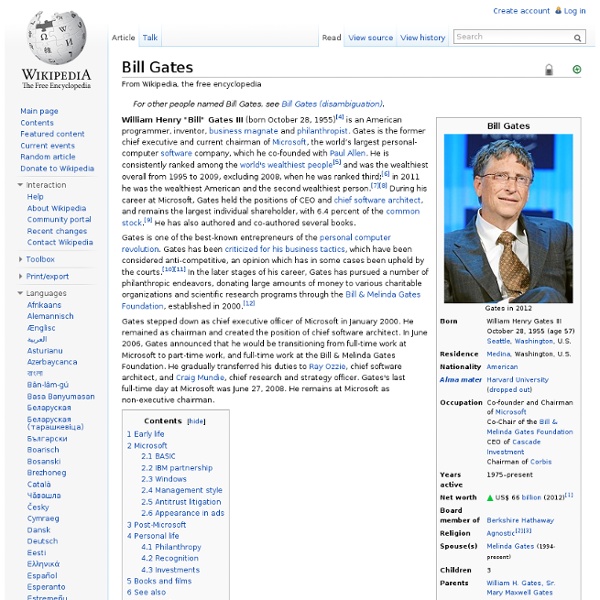 William Henry "Bill" Gates III (born October 28, 1955) is an American business magnate, philanthropist, investor, computer programmer, and inventor.[3][4] Gates is the former chief executive and chairman of Microsoft, the world’s largest personal-computer software company, which he co-founded with Paul Allen. He is consistently ranked in the Forbes list of the world's wealthiest people[5] and was the wealthiest overall from 1995 to 2009—excluding 2008, when he was ranked third;[1] in 2011 he was the wealthiest American and the world's second wealthiest person.[6][7] According to the Bloomberg Billionaires List, Gates became the world's richest person again in 2013, a position that he last held on the list in 2007.[8] As of April 2014, he is the richest.[1] During his career at Microsoft, Gates held the positions of CEO and chief software architect, and remains the largest individual shareholder, with 6.4 percent of the common stock.[a] He has also authored and co-authored several books.

Mark Zuckerberg Together with his college roommates and fellow Harvard University students Eduardo Saverin, Andrew McCollum, Dustin Moskovitz, and Chris Hughes, Zuckerberg launched Facebook from Harvard's dormitory rooms.[8] The group then introduced Facebook onto other campuses nationwide and moved to Palo Alto, California shortly afterwards. In 2007, at the age of 23, Zuckerberg became a billionaire as a result of Facebook's success. The number of Facebook users worldwide reached a total of one billion in 2012. Zuckerberg was involved in various legal disputes that were initiated by others in the group, who claimed a share of the company based upon their involvement during the development phase of Facebook. Early life At Ardsley High School, Zuckerberg excelled in classics. Software developer Early years According to writer Jose Antonio Vargas, "some kids played computer games. College years We had books called Face Books, which included the names and pictures of everyone who lived in the student dorms.

Wikiquote If you show people the problems and you show people the solutions they will be moved to act. William Henry Gates III (born 28 October 1955) is the co-founder and Chairman of Microsoft, and founder of the Bill & Melinda Gates Foundation. Forbes magazine has ranked him as the richest person in the world for twelve consecutive years. Sourced[edit] 1980s[edit] It's not manufacturers trying to rip anybody off or anything like that. 1990s[edit] If people had understood how patents would be granted when most of today's ideas were invented, and had taken out patents, the industry would be at a complete standstill today.… The solution to this is patent exchanges with large companies and patenting as much as we can. 2000s[edit] Microsoft has had clear competitors in the past. Interview from Programmers at Work (1986)[edit] Suzanne Lammers, Programmers at Work: Interviews With 19 Programmers Who Shaped the Computer Industry, Harper and Row, ISBN 0-914-84571-3. The Road Ahead (1995)[edit] Attributed[edit]

Teach Plus :: Opportunities for Teachers, Results for Urban Students Linus Torvalds Linus Benedict Torvalds (Swedish: [ˈliːn.ɵs ˈtuːr.valds] ( Biography[edit] Early years[edit] Torvalds was born in Helsinki, Finland. Torvalds attended the University of Helsinki between 1988 and 1996, graduating with a master's degree in computer science from NODES research group.[8] His academic career was interrupted after his first year of study when he joined the Finnish Army, selecting the 11-month officer training program to fulfill the mandatory military service of Finland. His interest in computers began with a Commodore VIC-20.[12] After the VIC-20 he purchased a Sinclair QL, which he modified extensively, especially its operating system. Later years[edit] After a visit to Transmeta in late 1996,[3] Torvalds accepted a position at the company in California, where he would work from February 1997 until June 2003. From 1997 to 1999 he was involved in 86open helping to choose the standard binary format for Linux and Unix. The Linus/Linux connection[edit] Authority and trademark[edit]

Steve Jobs did not Change the World, but Bill Gates Might A great deal has been written this week about the sad death of Steve Jobs at the age of 56. There is no doubt about it, he was a remarkable man who had a huge impact on the electronics industry. From the Apple 2 home computer, through the original Mac and up to the iPod, iPhone and iPad, Jobs pioneered technological innovation that was beautiful to look at, easy to use and very functional. It often took years for the Windows world to catch up with stuff that the Macintosh could do straight out of the box. Perhaps the most obvious demonstration of the quality of Apple products was the sheer devotion which they attracted among their users. But did he change the world? The majority of the world’s population are far too busy making a living and putting food on the table to afford the high-end consumer goods that Apple produces. So what about Bill Gates? But there is one way in which Gates might truly change the world; he is giving his money away.

Joshua Benton » Blog Archive » TEA: Agency officials got friends contracts; Exclusive: Neeley’s likely successor, foundation adviser are named By Joshua Benton Staff Writer Page 1A An internal investigation has found that top officials at the Texas Education Agency improperly steered state work to their friends. The report from the agency’s inspector general says that the problems lead all the way up to TEA’s deputy commissioner, Robert Scott, the likely choice to succeed Shirley Neeley as education commissioner. Investigators also found that a consultant for the Bill & Melinda Gates Foundation had an unusual influence over how grant money was divvied up. “These contracts were not competitively bid,” the report states. Mr. “I did not tell anyone to hire anyone,” Mr. The report’s timing is awkward for the agency. Unless Mr. A TEA spokeswoman said a number of agency officials shared Mr. “There are staff named in this report who believe there are factual inaccuracies in it,” spokeswoman Debbie Graves Ratcliffe said. The 23-page report details problems in six grant programs run by the agency. Mr. Mr. For the past several years, Mr. Mr.

Steve Jobs American business magnate (1955–2011) Steven Paul Jobs (February 24, 1955 – October 5, 2011) was an American entrepreneur, industrial designer, business magnate, media proprietor, and investor. He was the co-founder, chairman, and CEO of Apple; the chairman and majority shareholder of Pixar; a member of The Walt Disney Company's board of directors following its acquisition of Pixar; and the founder, chairman, and CEO of NeXT. He is widely recognized as a pioneer of the personal computer revolution of the 1970s and 1980s, along with his early business partner and fellow Apple co-founder Steve Wozniak. Jobs was born in San Francisco to a Syrian father and German-American mother. In 1985, Jobs was forced out of Apple after a long power struggle with the company's board and its then-CEO, John Sculley. Background Family Abdulfattah "John" Jandali was born and raised in an Arab Muslim household in Homs, Syria. Early life —Steve Jobs, 1995[12] Childhood —Steve Jobs Homestead High Reed College Pre-Apple

Susan Ohanian's Testing Outrages Behind Grass-Roots School Advocacy, Bill Gates This needs no comment. I've been posting info about Gates' underhanded, megalomaniacal, dirty dealings for years. Glad to see the is catching up. Too bad Dillon didn't identify " a Washington Post blog ." She is, of course, Valerie Strauss. Likewise, the astroturf appellation in Chicago comes from Substance. And kudos to Ken Libby. See annotated Gates Foundation 990 Form 2009 tax declaration here . Frederick M. The foundation has built a nuanced relationship with the two national teachers' unions. REMEMBER: Bill Gates receives tax credits for his so-called philanthropy. I would point out that my September 2010 article, 'Race to the Top' and the Bill Gates Connection Who gets to speak about what schools need ? INDIANAPOLIS-- A handful of outspoken teachers helped persuade state lawmakers this spring to eliminate seniority-based layoff policies. In some cases, Mr. Mr. "Everybody's implicated," he added. Mr. Ms. — Sam Dillon