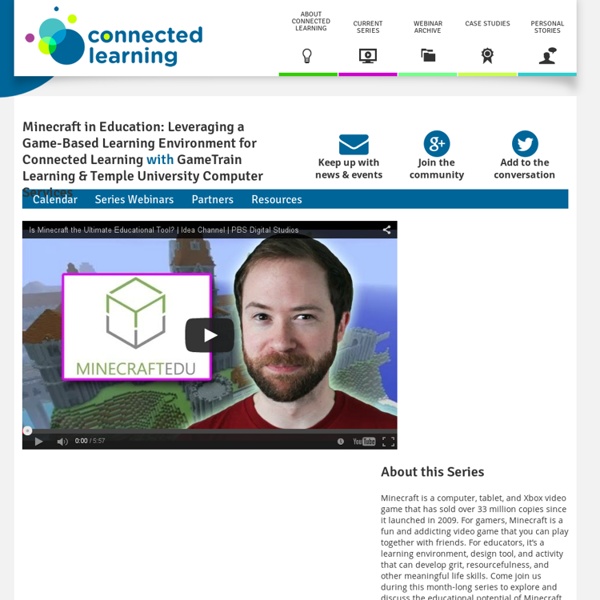 Write yourself in. Figment Welcome Educators! With our unique writing platform and engaged community of passionate teen readers and writers, Figment is a natural teaching tool. And so Figment offers special features developed just for you to use with your students, including exclusive author programming, writing prompts, and private group functionality, where you can create a virtual writers’ workshop for your classroom.

How Microsoft can use Minecraft to build its education strategy Educators had the right to feel a little freaked out about Microsoft’s announcement that it was acquiring Minecraft maker Mojang. Microsoft’s news release stated, “The Mojang team will join Microsoft Studios, which includes the studios behind global blockbuster franchises Halo, Forza, Fable and more.” Xbox head Phil Spencer’s blog said, “Minecraft adds diversity to our game portfolio and helps us reach new gamers across multiple platforms.” And Mojang’s own blog post noted, “We’re confident that Minecraft will continue to grow in an awesome way.” Not a single initial announcement noted a key – and strong – market for Minecraft: K-12 education.

Crafty Ways to Use Minecraft at School Maybe your child is one of the thousands hooked on Minecraft, a video game that lets players build with textured cubes in a virtual 3D world. Players can also explore seemingly endless worlds and time periods, gather resources, craft, and engage in combat. What you may not be aware of is the inherent educational potential of the game. Common Sense Media describes Minecraft as “an open-ended, exploration and creation focused environment…Players can create items and buildings from scratch using materials they harvest from the world around them…Kids can learn creative thinking, geometry, and even a little geology as they build imaginative block structures in this refreshingly open-ended mining and construction game.” Third grade teacher Jennifer Bond discovered the educational value of the popular video game almost by accident. In addition to using Minecraft’s scale game to build an accurate model of their bedrooms, Jennifer’s students used Minecraft to study:

Teaching in the Age of Minecraft Like many 11-year-olds in Texas, Ethan had to build a model of the Alamo as a school project. Often, students make their dioramas out of paper mache or popsicle sticks, but Ethan’s teacher gave him permission to build his project in Minecraft, the popular sandbox software game in which players build structures out of blocks. With his dad’s help, Ethan recorded a video tour of his scale model of the fort, complete with explanatory signs, and posted it on YouTube. A few minutes into the tour, it started raining unexpectedly over Ethan’s diorama, but Ethan noted, "This is exactly what happened during the battle of the Alamo—it rained."

10 Best Tools for Teachers and Students to Use in 2014 All teachers have a goal to establish clear, friendly, but authoritative communication with students and their parents. Parent meetings are not the most relaxed environment for the teachers to share their expectations and plans, which is why many educators have started using online tools to make this process easier. As a teacher, I have been using many web-based tools to bring some fun into the classes and make the communication with my students and their parents more effective. I’ve chosen some of the most useful tools to present in this list, which will hopefully be implemented in the teaching techniques of an increased number of educators during the upcoming year. 1. The Minecraft Cell: Biology Meets Game-Based Learning Minecraft, the popular sandbox game, is beloved by educators for its use as a learning tool. It enables students to explore, create and imagine in a completely different way than they could ever do in a traditional classroom. The beauty of the game is in the way it unleashes the creativity of both students and teachers.

How Teachers are Using Minecraft for Education Can popular video games actually be used as educational games? With gamification being all the rage, it’s not such a far-fetched idea. Take Minecraft, which has over 100 million users. 40+ Resources for Teaching Using Animation and Comics January 27, 2014 Some of the animation links catalogued here will give educators very basic tools and histories of animation while others have the animation already created and set in motion, it’s just a matter of sharing it with students. Educators need to decide which tool is best for them. If you want to create your own animation from scratch, then you want to go to sites such as Animwork. If you want to select from animation that’s already set up for you then perhaps Explainia makes more sense. 1.

Minecraft Makes You Think For the past few years my kids have been under the Minecraft spell. In fact, they spend so much time immersed in its pixelated worlds that our name for homeschool is Minecraft High. And you know what? I couldn’t be happier about that. What started out as just another request for a download has completely opened my mind to what learning can be. Minecraft in education Minecraft can be an educational tool that facilitates cooperation and teamwork among players. Educational benefits[edit | edit source] Minecraft can have huge educational benefits for children; it can help teach numerous subjects both with and without adult involvement.