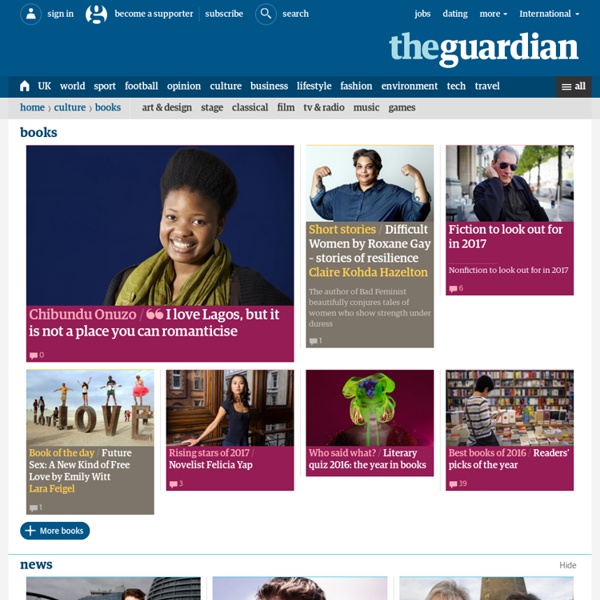 David Hare made his name in the 1960s as a young, provocative playwright – on the left with a sense of humour. He recalls his early and controversial plays, from Slag to Plenty, his revelation about writing and what happened when Helen Mirren couldn’t sing

Browse Textbook Sets Textbook Sets combine offerings from all Scholars Resource contributors to provide the most complete digital image accompaniment to the core survey texts. All Textbook Set images were photographed directly in front of the work of art, under controlled lighting conditions, with original film produced in volume - creating a richness of images superior to those created from books or duplicate slides. These images (and their metadata) provide a searchable, high-quality teaching resource that is a must-have basis for any course. Textbook Superset Description: CDR-4000 / CDR-4050

How I learned a language in 22 hours "What do you know about where I come from?" That was one of the first questions I ever asked Bosco Mongousso, an Mbendjele pygmy who lives in the sparsely populated Ndoki forest at the far northern tip of the Republic of Congo. We were sitting on logs around a fire one evening four years ago, eating a dinner of smoked river fish and koko, a vitamin-rich wild green harvested from the forest. I'd come to this hard-to-reach corner of the Congo basin – a spot at least 50km from the nearest village – to report a story for National Geographic magazine about a population of chimpanzees who display the most sophisticated tool-use ever observed among non-humans. Table of Contents - Magazine The Thirteenth Amendment forbade slavery and involuntary servitude, “except as punishment for crime whereof the party shall have been duly convicted.” Crops stretch to the horizon. Black bodies pepper the landscape, hunched over as they work the fields. Officers on horseback, armed, oversee the workers. To the untrained eye, the scenes in Angola for Life: Rehabilitation and Reform Inside the Louisiana State Penitentiary, an Atlantic documentary filmed on an old Southern slave-plantation-turned-prison, could have been shot 150 years ago. The imagery haunts, and the stench of slavery and racial oppression lingers through the 13 minutes of footage.

Capital - Secrets of learning a language — quickly Picture this: You want to apply for a dream assignment abroad. There’s just one problem. You need foreign language skills that you don't have — and time is not on your side. It might sound like an impossible task, but according to language experts, you can learn basic communication skills in weeks and master the basics of a foreign language in several months. While you might not quickly reach the fluency that allows you to understand great foreign literature classics, you can, though, quickly hone in on phrases and technical language specific to your needs whether you are working with the diplomatic service or a blue chip multinational. How to change your view of Africa Chimurenga, a pan-African English-language journal, depicts the continent’s horrors, sometimes from very close... I once had coffee in Cape Town with a Cameroonian named Ntone Edjabe. He ran an English-language journal called Chimurenga, but what I remembered from our chat were his vignettes of Lagos (where he’d studied) and Johannesburg (where he went next). In Lagos, he said, you’d be driving down the highway and suddenly see a guy selling cars on the highway.

30 Books Everyone Should Read Before Their 30th Birthday The Web is grand. With its fame for hosting informative, easy-to-skim textual snippets and collaborative written works, people are spending more and more time reading online. Nevertheless, the Web cannot replace the authoritative transmissions from certain classic books that have delivered (or will deliver) profound ideas around the globe for generations.

What German comedians think of Brits – from bad to wurst Watching standup – not to mention telly comedy – affords plenty of opportunities to hear what Brits think of the Germans. No sense of humour, ruthlessly efficient, beach towels on the sun loungers, blah blah blah. Aside from Henning Wehn’s career and the occasional visit by Michael Mittermeier, we seldom hear what Germans think about Brits. Until now, as a clip of Germany’s version of The Daily Show on the possibility of a “Brexit” from the EU circulates online. Tattered Cover Read & Feed February: Love it or loathe it. Don’t gobblefunk around with words. Celebrate your freedom to read with us. Don’t be Absurd. Read Banned Books freely.

The Online Books Page Listing over 2 million free books on the Web - Updated Wednesday, February 8, 2017 Search our Listings -- New Listings -- Authors -- Titles -- Subjects -- Serials More open access journals now listed here -- Blog (Everybody's Libraries) -- Latest Book Listings A Celebration of Women Writers -- Banned Books Online -- Prize Winners Online General -- Non-English Language -- Specialty Want to Learn a New Language? 6 Reasons to Consider German by Robert Montenegro It's safe to say that the German language has suffered over the past 100 years. Much of the blame for this falls on German citizens and policies from the early-to-mid 20th century, the ramifications of which still haunt the nation today. There's a stigma attached to German (perhaps unfairly at this point) that will take decades to fully disappear. Because of this, German isn't always near the top your typical language learner's wishlist. Yet there are myriad reasons why learning German is a terrific investment of time and brainpower.

Books Berlusconi’s So-Called Bunga-Bunga Life By Barbie Latza Nadeau In a new authorized biography, ‘My Way,’ there’s an ‘awestruck’ Putin, the sick joke he and Gaddafi made famous—and the Italian playboy PM who remains as slippery as ever.