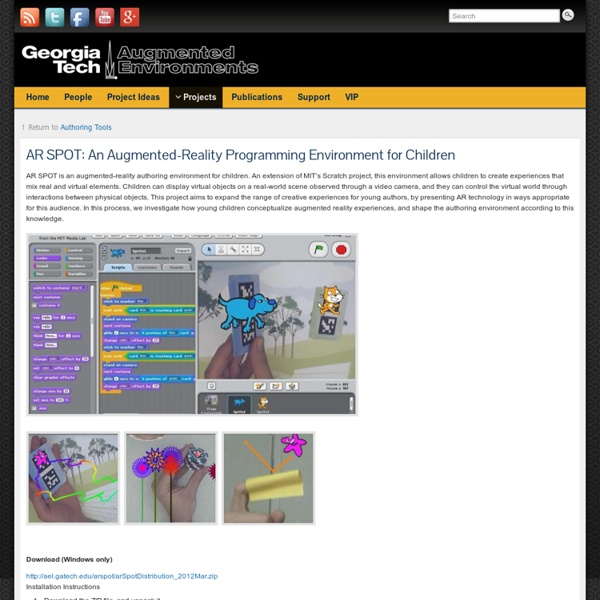 AR SPOT is an augmented-reality authoring environment for children. An extension of MIT’s Scratch project, this environment allows children to create experiences that mix real and virtual elements. Children can display virtual objects on a real-world scene observed through a video camera, and they can control the virtual world through interactions between physical objects. This project aims to expand the range of creative experiences for young authors, by presenting AR technology in ways appropriate for this audience. In this process, we investigate how young children conceptualize augmented reality experiences, and shape the authoring environment according to this knowledge. Download (Windows only) Installation Instructions Download the ZIP file, and unpack it.In the SpotDocumentation folder, you will find a file called “SPOT Cards”. AR SPOT Details The source code for Scratch was modified to include a camera feed, and novel functions were added to the library of programming blocks.

Scratch Exercise 2 Scratch Exercise 2: Creating a Simple Sight Word Game using Random Motion and Conditional Statements. The real power in programing lies in the ability to have objects ("Sprites") in your world interact with each other and cause changes in behavior or action. In Exercise 2 we will learn how to: Augmented Reality App – the Next Generation Satellite Finder Posted by: Alan in iPhone Apps UPDATE: Also available for the ANDROID Very surreal, this is the next generation satellite finder: Point your iPhone anywhere towards the sky and see all the satellites lined up, on the live video screen! At a glance, you’ll see where the satellite is and whether any trees or buildings are blocking the line of sight. Think of multi-lnb dishes and now you know where to place your dish best. Doing a site survey and setting up a dish is going to be a piece of cake with this app.

FORUM ROMANUM de L.VII.C - Armazém 3D 3D Warehouse Advanced Search Sign In Error Download Código Opensource para producciones de Realidad Aumentada Augmented Reality is the name given to technology that integrates virtual data on real world in real time, using for it something technologic. We have some nice examples of uses on our blog. Some people call it "Reality Expanded," but the term "Augmented Reality" was the most famous and there is nothing to do about it. Let's call it "A.R." from now on, to save characters and save the nature and the world.

Scratch - Videos Make your sprite move forward Make your sprite spin Make your sprite change color Make your sprite dance Scratch: Making a simple game. « Digital Art For All This is done as a multiple step process and will be done over several classes. A five lesson plan is shown below. Each student will create their own version of this game with their own character and background, and their own rules for movement/food/enemy. There are enough variations to keep the game interesting and different from any other game in the class. Lesson 1. 1. Excellent Videos OnThe Use of Augmented Reality Apps by Students Below are some good videos I got a few days ago on examples of how some augmented reality apps are being used with kids to help them improve their learning. If the concept of augmented reality if all new to you then here is a brief definition of it: Augmented Reality is exactly what the name implies: an augmented version of realty created by mixing technology with the known world. It might be a distorted, augmented, or less augmented version of the actual world but in its basic form, augmented reality is a simulation or rather a way of superimposing digital contents into the real context.

Realidad Aumentada que es "real" y centrado en el aprendizaje Augmented Reality allows you to expand the experience of the real world with information, video, sound, GPS data, and so on. If well utilized, it can be much more than just another cool tech thing… You will see below an example of how Augmented Reality was used to expand the experience of visitors to our school’s Art Exhibit. As students had to reflect on and verbalize their artistic choices, an augmented reality layer was created for viewers of the exhibit. In the process, students were excited about sharing with an authentic audience and had to really recall and reflect.

Scratch Help - Scratch Help ScratchEd An online community for educators using Scratch, with stories, discussions, and resources, such as the Scratch curriculum guide. Scratch Wiki The Scratch Wiki contains a wide variety of articles by Scratchers for Scratchers, including advanced topics and tutorials. Scratch 2 Offline Editor Scratch in Pre-algebra Class I have been using Scratch for a couple years in an elementary school in St. Paul. For math, I teach 7th grade pre-algebra to a gifted/talented class of 6th graders. The curriculum at this level in our district (Holt Level 3 Math) tends to directly teach concepts without much open-ended problem solving. Scratch is full of potential for using the math we were studying to solve interesting problems. I'm interested in figuring out ways Scratch be used by kids to explore topics like probability, percentages, ratios and proportions, patterns and functions.