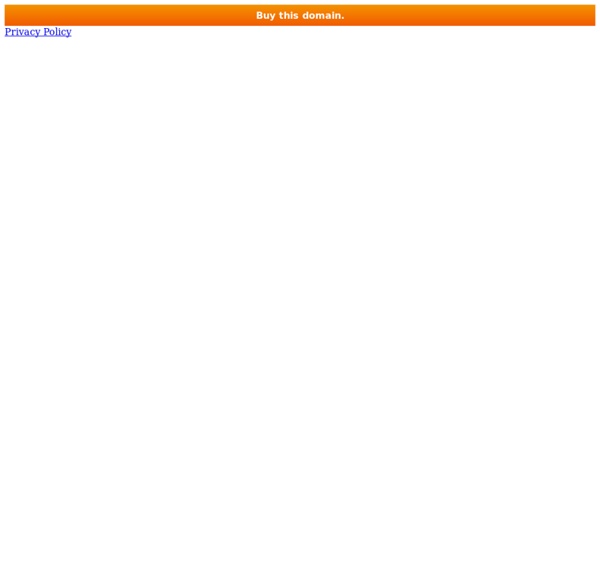 Film & Video The following films are presented for educational and non-commercial use only. All copyrights belong to the artists. About UbuWeb Film & Video UbuWeb is pleased to present thousands of avant-garde films & videos for your viewing pleasure. Donnie Darko A new theory to help the viewer unravel the cult classic. Erik A. Coburn n recent years, Donnie Darko, directed by Richard Kelly, has become a cult classic. While most people who watch this twisted film will love it, few will understand the intricate, multi-layered timeline residing within. But if you analyze the film, you will notice that every little detail, every single line, has significance in determining what really goes on in Middlesex.

Czech & Polish posters for kaiju films 11 Jan 2011 Here are a few classic Japanese monster movie posters from Poland and the former Czechoslovakia. [Via Monster Brains] Godzilla (Poland, 1957) Son of Godzilla (Poland, 1974) Monster from a Prehistoric Planet (Czechoslovakia, 1986) 5 Ways To Hack Your Brain Into Awesomeness Much of the brain is still mysterious to modern science, possibly because modern science itself is using brains to analyze it. There are probably secrets the brain simply doesn't want us to know. But by no means should that stop us from tinkering around in there, using somewhat questionable and possibly dangerous techniques to make our brains do what we want.

The 25 Best Movies of 2014 (So Far) We’re halfway through the year, and it’s time to take a snapshot of the best movies that 2014 has to offer so far. As these films sit with us and more of our critics see them all, the order may change by the time December rolls around. But for now, these are the movies that have had the biggest impact on us in 2014. As usual, there are documentaries and quiet indie fare mixed with action blockbusters and even a couple of “kids” movies. Combustible Celluloid - Guide to Cult Movies and Cult Films Army of Darkness (1993) The third film in Sam Raimi's Evil Dead trilogy features more zombies, more action, more laughs, and more kisses. With Bruce Campbell. "Gimme some sugar, baby!" Basket Case (1982) Frank Henelotter's amazing low-budget splatter comedy showcases Siamese twin brothers -- one normal, the other a squishy little beast who lives in a basket -- searching for revenge on the New York doctors who separated them. Battle Royale (2000) This mind-blowing Japanese film is endlessly entertaining, by turns gory and hilarious, disturbing and exciting. The great Japanese exploitation filmmaker Kinji Fukasaku (The Green Slime, Yakuza Graveyard) was nearly seventy when he made this masterpiece, and it turned out to be his final completed film.

John Wayne: 25 Free Western Films Online 32 years after his death, John Wayne (né Marion Morrison) remains a tremendously popular movie star. According to a Harris Poll taken earlier this month (January 2011), Americans still rank The Duke as their third most favorite actor, putting him right behind Johnny Depp and Denzel Washington. No doubt about it, the legend of John Wayne continues to grow. And happily you can find a gold mine of John Wayne Western films online – all free. Today, we have pulled together a list of 25 films that span five decades of work, moving from the 1930s to the 1970s. You can find them all otherwise listed in our collection of Free Movies Online.

AMERICAN JUGGALO: The Short Juggalo Doc You Didn’t Know You Needed To See The Juggalo version of HEAVY METAL PARKING LOT lets the Faygo-swillers speak for themselves. Is there a subculture as weird and specific and largely ridiculed as the Juggalos? The fanbase of the Insane Clown Posse, tens of thousands of Juggalos come together every year for the Gathering of the Juggalos, a bacchanal of (frankly horrible) music, drugs and, one assumes, gross sex.

Tom Morellos 13 greatest heavy metal albums of all time "I have to admit, while spinning the wheel on my iPod, I realized what a daunting task it would be to whittle my list down to just 10 records. "Countless hard and heavy albums have rocked my world over the years, so many, in fact, that the proverbial 'top 10' felt somewhat constricting. Sadly, as can happen when compiling any kind of 'best of,' a few classics get left on the cutting room floor. "That said, here's my top 10 favorite heavy metal albums of all time, with three additional selections.

The 30 Best Films of the Decade - Page 2 of 3 20. Super Troopers Say what you’d like about the movies they’ve made since, but don’t spread ill-will toward Broken Lizard’s breakout hit. The first ten minutes of this film might be some of the best scripted comedy in history, let alone the decade. This is one of two most-quotable films on our list, one that forever popularized the mustache ride.