Russell Brand May Have Started a Revolution Last Night 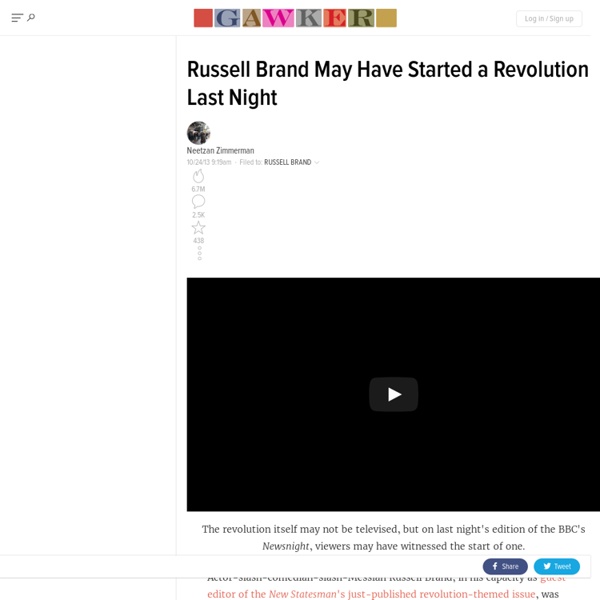 Lose to Win | Challenge Competing for the World Largest Infrastructure Project: Over 100 Million Jobs at Stake Elon Musk and Daryl Oster, competing for what could become the world’s largest infrastructure project When Tesla Motors CEO, Elon Musk, mysteriously leaked that he was working on his Hyperloop Project, the combination of secrecy, cryptic details, and his own flair for the dramatic all contributed to the media frenzy that followed. Leading up to this announcement was his growing anxiety over California’s effort to build a very expensive high-speed rail line between Los Angeles and San Francisco with outdated technology. While the Musk media train was picking up steam, several reporters pointed out a similar effort by Daryl Oster and his Longmont, Colorado-based company, ET3, to build a comparable tube transportation system that was much further along. Indeed both are working on what will likely be the next generation of transportation where specially designed cars are placed into sealed tubes and shot, much like rockets, to their destination. Transportation Trends Getting ET3 Started

Vanguard: The Best Documentary Series You've Never Seen To Our Faithful Current.com Users: Current's run has ended after eight exciting years on air and online. The Current TV staff has appreciated your interest, support, participation and unflagging loyalty over the years. Your contributions helped make Current.com a vibrant place for discussing thousands of interesting stories, and your continued viewership motivated us to keep innovating and find new ways to reflect the voice of the people. We now welcome the on-air and digital presence of Al Jazeera America, a new news network committed to reporting on and investigating real stories affecting the lives of everyday Americans in every corner of the country. Thank you for inspiring and challenging us. – The Current TV Staff

Emmanuel Jal Much-Hyped, MOOCs Maneuver Toward Version 2.0 Since then-Stanford professor Sebastian Thrun opened his Fall 2011 Introduction to Artificial Intelligence course to tens of thousands students around the world, there has been a lot of interest and excitement surrounding MOOCs, or massive, open online courses. Thrun went on to found a for-profit online university, Udacity, with the backing of some of Silicon Valley’s most influential investors. Two of Thrun’s former Stanford colleagues launched a competitor, Coursera, with the support of the granddaddy of all venture capital firms, Kleiner Perkins. It seemed clear that the future of education would be in MOOCs. But a few years into the courses’ existence, research on their effectiveness has begun painting a grim picture of their ability to educate students. Pedagogical Woes A statistic commonly cited to disparage MOOCs is that just a small fraction of students who sign up for a MOOC actually complete it. Testing is another challenge.

5 Shocking Realities of Being Transgender the Media Ignores I bet that, for most of you, nothing would feel weirder than having your dad or brother tell you he's now a woman. And for a certain percentage of people, the reaction to that news would be violent. The reality is that the entire concept of transgender people makes folks very uncomfortable, which means we're simply not talking about it enough. I'm Amy, a 20-something trans woman living in California. You probably think of this state as a place that prides itself on diversity, acceptance, and every other kind of happy buzzword, but even people here are filled with enough bad information on transgender issues to fill a fundamentalist hate tract. #5. Mike Kiev/iStock/Getty Images Here is how trans women usually show up in pop culture: A straight male character hits on some girl at a bar, only to find, surprise, said lady is transgender. Paramount Pictures And is probably played by a woman with a prop. Cathy Yeulet/Hemera/Getty Images "Guys, they passed. #4. kkgas/iStock/Getty Images #3.

Upworthiest Tens of billions of potentially habitable, Earth-size planets in our galaxy, say astronomers Artist’s representation of the “habitable zone,” the range of orbits where liquid water is permitted on the surface of a planet. The authors find that 22% of Sun-like stars harbor a planet between one and two times the size of Earth in the habitable zone. (Credit: UC Berkeley) One in five stars in our galaxy like the Sun have planets about the size of Earth and a surface temperature conducive to life, astronomers at UC Berkeley and University of Hawaii, Manoa now estimate. The estimate was based on a statistical analysis of all the Kepler observations of NASA’s Kepler space telescope of the 200 billion stars in our galaxy. Given that about 20 percent of stars are Sun-like, the researchers say, that amounts to several tens of billions of potentially habitable, Earth-size planets in the Milky Way Galaxy. “It’s been nearly 20 years since the discovery of the first extrasolar planet around a normal star. Earth-size may not mean habitable Transiting planets A census of extrasolar planets

Easy Way To Prepare A $20 (Or Less) Homeless Backpack Care Kit A couple from Washington State share how they help homeless people with a backpack full of useful items for $20 or less. They explain how you can find good, sturdy, used backpacks at thrift stores as well as beanies, warm scarves, socks and gloves. Dollar stores are a great place to find moist wipes, toilet paper and toiletries like toothpaste and mouthwash – a luxury for people who have nothing. Some food items that pack well are cereal bars, small canned goods with pull tabs, bottled water and juice boxes. Peanut butter is full of protein and lasts a long time. It’s a cold winter and there are people who need your help.