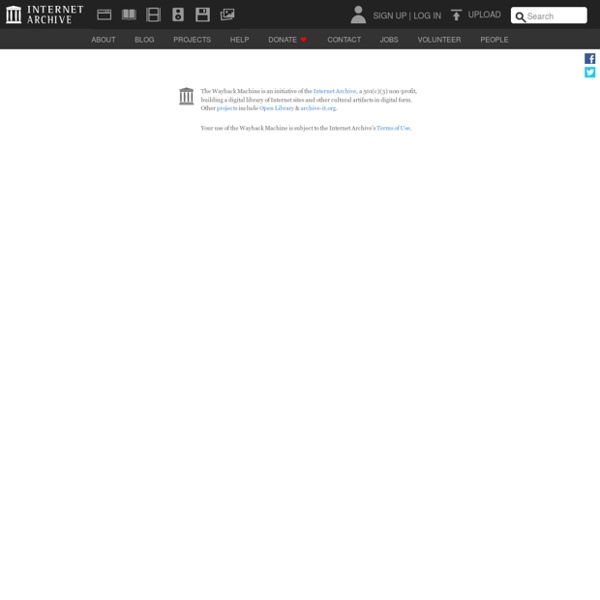 Magi Magi (/ˈmeɪdʒaɪ/; Latin plural of magus; Ancient Greek: μάγος magos; Old Persian: 𐎶𐎦𐎢𐏁 maguš, Persian: مُغ‎ mogh; English singular magian, mage, magus, magusian, magusaean; Kurdish: manji) is a term, used since at least the 6th century BC, to denote followers of Zoroastrianism or Zoroaster. The earliest known usage of the word Magi is in the trilingual inscription written by Darius the Great, known as the Behistun Inscription. Starting later, presumably during the Hellenistic period, the word Magi also denotes followers of what the Hellenistic chroniclers incorrectly associated Zoroaster with, which was – in the main – the ability to read the stars, and manipulate the fate that the stars foretold.[citation needed] However, Old Persian texts, pre-dating the Hellenistic period, refer to a Magus as a Zurvanic, and presumably Zoroastrian, priest. Pre-4th century BC usage[edit] In Iranian sources[edit]

Mallard Creek visit One account. All of Google. Sign in to continue to Docs Guide To Using Reverse Image Search For Investigations Reverse image search is one of the most well-known and easiest digital investigative techniques, with two-click functionality of choosing “Search Google for image” in many web browsers. This method has also seen widespread use in popular culture, perhaps most notably in the MTV show Catfish, which exposes people in online relationships who use stolen photographs on their social media. However, if you only use Google for reverse image searching, you will be disappointed more often than not. Limiting your search process to uploading a photograph in its original form to just images.google.com may give you useful results for the most obviously stolen or popular images, but for most any sophisticated research project, you need additional sites at your disposal — along with a lot of creativity. This guide will walk through detailed strategies to use reverse image search in digital investigations, with an eye towards identifying people and locations, along with determining an image’s progeny.

Reference List: Other Print Sources Note: This page reflects the latest version of the APA Publication Manual (i.e., APA 7), which released in October 2019. The equivalent resource for the older APA 6 style can be found here. Important Note: Because the 7th edition of the APA Publication Manual heavily emphasizes digital and electronic sources, it does not contain explicit instructions for certain less-common print sources that earlier editions covered. For this reason, some of the examples below have been adapted from the instructions for sources with similar attributes (e.g., the conference proceedings example is derived from the instructions the 7th edition manual gives for citing edited collections). Every example below that has been adapted in this way is accompanied by a note explaining how it was adapted. Please also note: While this resource contains many examples of citations for uncommon print sources that we think are helpful, it may not account for every possibility.

How to Find the Most Recent Satellite Imagery Anywhere on Earth At Azavea, we help our clients use machine learning and satellite imagery to map places all over the world—we’ve trained AI to map everything from buildings, to bodies of water, to solar panels and crosswalks. But every project starts with the same question: based on what you care about in the imagery, what’s the newest, cheapest, and highest-resolution imagery we can find? Today, we’re sharing our simple tool for triaging these requests along with plenty of links to help guide you to the right image for your needs! Here is a simple flowchart to find the right recent satellite imagery source for your project: Free, browsable data If you are just curious about seeing the most recent high-resolution image you can find for a given area of interest, and you don’t care about getting access to the raw images or using what you see for some commercial purpose, far-and-away the best tool you can use is Google Earth’s Explore New Satellite Imagery Tool.

Black magic History[edit] Like its counterpart white magic, the origins of black magic can be traced to the primitive, ritualistic worship of spirits as outlined in Robert M. Place's 2009 book, Magic and Alchemy.[3] Unlike white magic, in which Place sees parallels with primitive shamanistic efforts to achieve closeness with spiritual beings, the rituals that developed into modern "black magic" were designed to invoke those same spirits to produce beneficial outcomes for the practitioner. 8 Effective Web Design Principles You Should Know Your website design is more important for conversions than you think. You can implement every conversion-boosting tactic in the world, but if your web design looks like crap, it won’t do you much good. Design is not just something designers do. Design is marketing. Design is your product and how it works.

How to recognize fake AI-generated images - Kyle McDonald - Medium In 2014 machine learning researcher Ian Goodfellow introduced the idea of generative adversarial networks or GANs. “Generative” because they output things like images rather than predictions about input (like “hotdog or not”); “adversarial networks” because they use two neural networks competing with each other in a “cat-and-mouse game”, like a cashier and a counterfeiter: one trying to fool the other into thinking it can generate real examples, the other trying to distinguish real from fake. The first GAN images were easy for humans to identify.