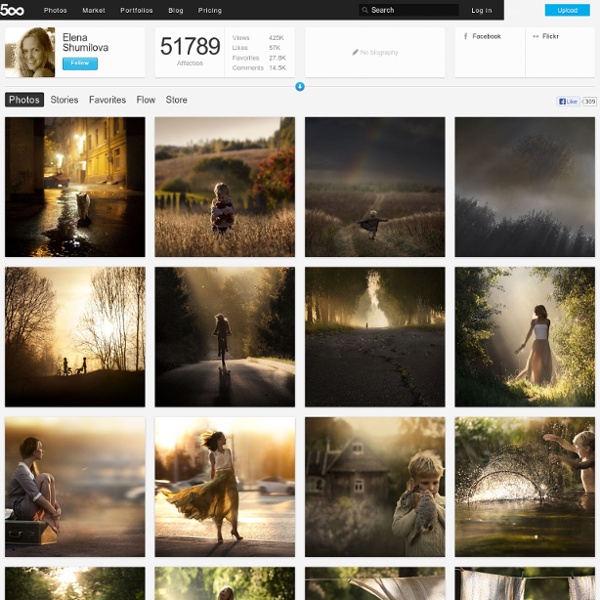 Russian Mother Takes Magical Pictures of Her Two Kids With Animals On Her Farm These wonderful photographs by Elena Shumilova plunge the viewer into a beautiful world that revolves around two boys and their adorable dog, cat, duckling and rabbit friends. Taking advantage of natural colors, weather conditions and her enchanting surroundings, the gifted Russian artist creates cozy and heartwarming photography that will leave you amazed. Show Full Text The boys in the photographs are the photographer’s sons and the animals belong to the farm she runs. “I largely trust my intuition and inspiration when I compose photos. I get inspired mainly by my desire to express something I feel, though I usually cannot tell exactly what that is” Shumilova explained to BoredPanda.

Elk Island National Park Cameras Capture Elusive Black Bears (PHOTOS) Elk Island National Park is one of the best places to catch a glimpse of bison up close, but not many of the park's 200,000 visitors each year get the chance to see a bear. Wildlife researchers set up cameras in the park in the hopes of capturing photos of smaller animals. Instead, they got photos of black bears roaming the park, which is about 35 kilometres east of Edmonton. The cameras are part of the Moraine Mesocarnivore Project, a community effort put together by Alberta Parks in collaboration with Alberta Innovates, the Friends of Elk Island National Park and Beaver Hills Initiative. Martha Allen, Elk Island National Park’s ecologist, said although it’s uncommon to see bears in the park, it’s not unprecedented. “We weren’t surprised,” she said.

What’s in that image? Masterpieces like you’ve never seen them before During the past few months, I’ve become increasingly interested in digital art. Glitch, visualizations, pixels … it’s all very exciting, and I’ve wanted to dive in myself. As I progressed, I found myself tweaking the level of abstraction so much that I wrote code to do it in the browser. Below are highly abstracted famous works of art. Award-Winning Images Reveal Hidden Beauty of Science Like Never Before What do a zebrafish embryo, vitamin C, and breast cancer have in common? Stunning magnified images of these subjects, along with 15 others, were recently selected to receive accolades from the Wellcome Image Awards, which honors the best and most striking imagery from the world of science and asks the public to "come closer" as it reveals the unseen world around us. Considered the world's leading source for medical imagery, U.K.

Project 562 - Project 562- A Photo Project by Matika Wilbur documenting Native America On January 18th 2014, Project 562 joined Quechan leaders and elders in prayerful opposition to the Ocotillo Wind Express Facility, responsible for the desecration of Ocotillo's Sacred Desert. We made a video about it, have a look: Vernon Smith, Quechan Tribal Member Ila May Dunsweiler, Quechan Language Instructor Preston Arroweed, Quechan/Kumni Tribal Member MATIKA will be a TED TALKER in New York CityI will be offering an TEDx talk in NYC dedicated to the topic, "Agents of Change" on Friday, March 28, 2014 sometime between 9:00 AM to 6:00 PM (EDT), New York, NY. (I'll let you know when I know a time.) To learn more, please visit: best part is that the tickets are free!

Playful Puppy Interrupts Weatherman's Forecast - AOL On Tags: GeoBeats,mike sobel,mike sobel dog,mike sobel puppy,news,playful puppy forecast,playful puppy weather,puppy play forecast,puppy play weather,weatherman puppy,weird news Grab video code: Transcript As adorable as they are, it's hard to predict what dogs would do in certain situations. Global Edmonton weatherman Mike Sobel knows that all too well.Recently the Edmonton Humane Society dropped by the news station with a pooch named Ripple. Mike grabbed onto the leash and walked the dog over to the weather board, which is something he commonly does to showcase canines that are up for adoption.This case was a little different however, as Ripple just wanted to play around.

Get high on sci-fi: 10 short story collections that will blow your mind We’re huge short story fans around this way, but while we definitely foster great big loves for the likes of Alice Munro and V.S. Pritchett, we also very much dig the science-fiction greats. We reckon newcomers to the sci-fi field might get the impression it’s dominated by novels or series of novels, but that’s not really the case: excellent science-fiction short stories abound. And as a field it’s pretty easy to plunge into without much prior knowledge – the story anthology has been a staple of the sci-fi domain for quite a while now (though, sadly, that phenomenon does seem to be on the wane).

The San Francisco Globe - Everything Worth Seeing On the Internet Here at the SF Globe we get a lot of user submitted pictures. These definitely struck us as memorable. 1. William Harley and Arthur Davidson, 1914 - The company was founded in 1903 and demand for motorcycles grew starting with WWI. Uploading... Fantasy Clashes With Reality in Awesome Photos of Cosplayers at Home Who knew portraits of people dressed up in costume could be so revealing. Klaus Pichler’s photo project Just the Two of Us captures Austrians hidden behind elaborate costumes but revealed on a deeper level by posing in their homes. “It’s definitely a kind of sociological approach,” says Pichler, 36, who lives in Vienna. Pichler has been working on the project for two-and-a-half years and, predictably, it’s ocasionally been hard to find people who will let him into their homes.

The Ministry of Noodles — Portrait and travel photographer based in Guangzhou, China This is the last posting about the Photography and Fashion course which I attended at Instituto Italiano Di Fotographia in Milan this summer. This two week summer course was designed to prepare the photographer for breaking into the world of fashion photography and, as well as providing a sound introduction to the processes involved in finding work in this industry. Naturally it provided some practical photography shooting experience and the location shooting exercise, was perhaps the area where I learned the most lessons. Selecting a location perhaps presents the biggest challenge.

The stories behind 3 amazing, award-winning wildlife photos Photo: Michael "Nick" Nichols/National Geographic National Geographic magazine is known for its out-of-this-world photography, so it's no wonder that three of the magazine's contributing photographers would dominate the 2014 Wildlife Photographer of the Year Awards, one of the world's most prestigious photography competitions. Now in its 50th year, the awards are presented by the British Natural History Museum and BBC Worldwide. The competition attracted more than 42,000 entries from amateur and professional photographers around the globe, but it was American photographer Michael "Nick" Nichols who nabbed the grand prize title for his beautiful photo "The Last Great Picture," which was previously featured in National Geographic magazine.

Great Unsung Science Fiction Authors That Everybody Should Read Saying that Clifford Simak's writings sometimes have a "1950 pulpy feel" is both true and misleading, at least for those who think the pulps were Mickey Spillane by way of Quentin Tarantino. Simak's characters tended to be both thinking and feeling people — rare in most pulp writings — and violence, while it was used, was rarely a first choice, and was usually committed with reluctance that a better solution hadn't been found. In a word, his characters do tend toward being gentle people, men and women who'd enjoying sitting on the steps, watching the stars come out, in the company of their dog and their favorite robot. He's one of my favorite writers, and I'm delighted to have met him a handful of times at conventions. Thanks for giving him a boost! Indeed, I've always thought Simak to be more a "Midwest country" writer than a pulp one; His depictions of the workaday people of the world, and the rural people are honest and real while his aliens are believable yet very foreign.

40 Of The Most Powerful Social Issue Ads That’ll Make You Stop And Think Many people complain about advertisements as an obnoxious way for companies to invade our everyday lives and cram their products down our throats, but that’s not all that advertisements are good for. The advertisements on this list are excellent examples of effective advertising strategies for social issue campaigns that let their voices be heard. Show Full Text A well-made advertisement is designed to grab your attention and to remain in your memory long after you’ve left it behind, and that is exactly what many of these social causes need. Getting people to think and worry about various social and environmental issues (or even simply getting them to be aware of them) is important for raising public supporting and affecting meaningful changes. A few of these ads are, in fact, commercial ads, but it’s still nice that they champion socially or environmentally aware causes/products.

Artist Shows What Disney Princesses’ Happily-Ever-Afters Really Look Like EmailEmail The one thing you could be sure about in childhood was that every fairy tale would end with a “happily ever after”. But what if we were to continue on with what happened to the beautiful princesses after we closed the last book page?