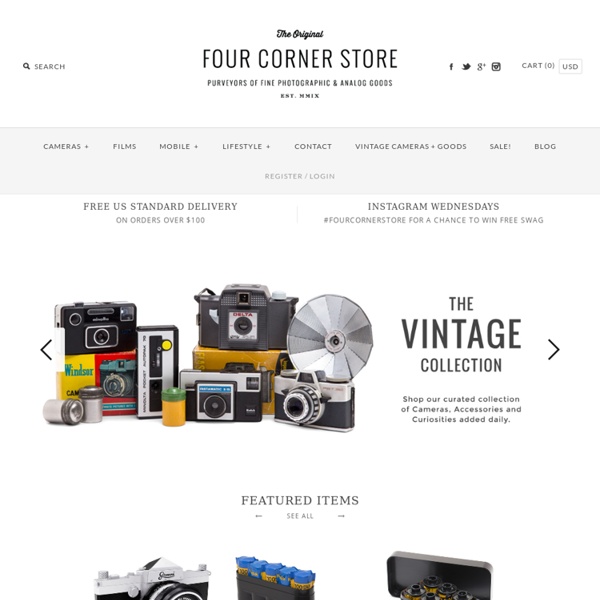 Cannes 2012: 'Adweek' and Leo Burnett Pick Favorites to Win Lions The Cannes Lions festival has been moving away from its focus on TV spots in recent years. In 2012, for the first time in 25 years of forecasts, fewer than half the entries in Leo Burnett's Cannes Predictions Reel are traditional commercials. The rest? Music videos, Facebook apps, 3-D light shows, mobile-commerce technologies, annual-report designs. The TV spot still thrives, but many lively companions are jostling for Lions in France.

Tuesday's Tech of the Week: Type & Color Edition Since the world of design is about to get quite a bit cloud-ier with the release of Adobe Creative Cloud, we decided to take today's tech roundup to pay homage to 10 websites, apps, and games that help designers become better designers. As purveyors of color, creativity, and tech innovation, our team refers to almost all of these sites on a weekly basis! First, the world of type. 1. Night Sky Photography Tips Star Trails Due to the Earth’s rotation about its axis, it seems that the light from stars moves in circles around the celestial pole. These movements are detectable after about 5 to 10 minutes, and can be traced by your camera in the form of a streak. To photograph this magical effect, you need a sturdy tripod and lots of patience.

25 clever ideas to make life easier Via: amy-newnostalgia.blogspot.com Why didn’t I think of that?! We guarantee you’ll be uttering those words more than once at these ingenious little tips, tricks and ideas that solve everyday problems … some you never knew you had! (Above: hull strawberries easily using a straw). Startup Advice: How Entrepeneurs Gain Credibility While talking with young founders in Europe and the US over the last couple months, I have been asked the same question repeatedly -- how can an entrepreneur just starting out gain the necessary credibility to attract capital? It is an important question because, at its heart, a startup investment is an investment in the entrepreneur. And the earlier stage the investment, the more so this is true.

Basics of Photography Nathan Gitonga | December 31 2013 New Year is here once again and it’s that time of the year when people come up with new resolutions commonly known as New Year resolutions. For a photographer also it should be a time when you make your own resolution on how to further your career in photography or to make your passion a career. How to use Google for Hacking. Google serves almost 80 percent of all search queries on the Internet, proving itself as the most popular search engine. However Google makes it possible to reach not only the publicly available information resources, but also gives access to some of the most confidential information that should never have been revealed. In this post I will show how to use Google for exploiting security vulnerabilities within websites. The following are some of the hacks that can be accomplished using Google.

Subastas de LaSubasteria: El sitio web número 1 de ofertas en línea www.lasubasteria.com Inicio | Servicio al Cliente | E.R. de santiago pinotepa naciona Dorm Room Spa: 3 Easy DIY Beauty Recipes to Try Photo Credit It’s that taxing in-between time of the semester again – spring break is over, papers and projects are coming due, and finals are looming ahead. It’s clear that college students are stressed right now, and with that stress comes the need for relaxation. And what better way to unwind than by pampering yourself and indulging in some me-time? Of course, as college students, we can’t all afford to shell out for a trip to a high-end spa. So how do you get all the benefits of a spa treatment without the hefty cost?

SCHOPENHAUER'S 38 STRATAGEMS, OR 38 WAYS TO WIN AN ARGUMENT Arthur Schopenhauer (1788-1860), was a brilliant German philosopher. These 38 Stratagems are excerpts from "The Art of Controversy", first translated into English and published in 1896. Carry your opponent's proposition beyond its natural limits; exaggerate it. The more general your opponent's statement becomes, the more objections you can find against it. The more restricted and narrow his or her propositions remain, the easier they are to defend by him or her. Use different meanings of your opponent's words to refute his or her argument. 100 Websites You Should Know and Use Entertainment Meet David Peterson, who developed Dothraki for Game of Thrones There are seven different words in Dothraki for striking another person with a sword. Among them: “hliziﬁkh,” a wild but powerful strike; “hrakkarikh,”a quick and accurate strike; and “gezrikh,” a fake-out or decoy strike. But you won’t find these words in George R. R.

Like it, Pin it, Sell It - Why Pinterest Matters for Your Business Pinterest. Is this a term that makes you scratch your head, or does it describe your latest obsession? I can definitely say around our office, it’s everyone’s latest obsession, and it looks like we’re not alone. The Kony 2012 video phenomenon « evan lieberman I could say that I simply didn’t have time to watch the KONY 2012 video all week, but the truth is I really didn’t have any interest. Sure, I heard that it was going viral, but since I was familiar with the nature of the atrocities committed by Joseph Kony and his Lord’s Resistance Army (LRA) — particularly the recruitment of child soldiers to his fanatical cult, and aspirations of developing a theocratic state — it didn’t initially occur to me that I ought to watch. But then a friend asked for my reflections on the phenomenon, and I decided to join just about everyone else and invest about 29 minutes in front of my computer screen. Between the time when I started this morning, and when I finished this afternoon, more than 4 million views were added to the tally, reaching over 56 million. I was pretty gripped even thought I didn’t learn a single new fact about this absolutely horrific situation.