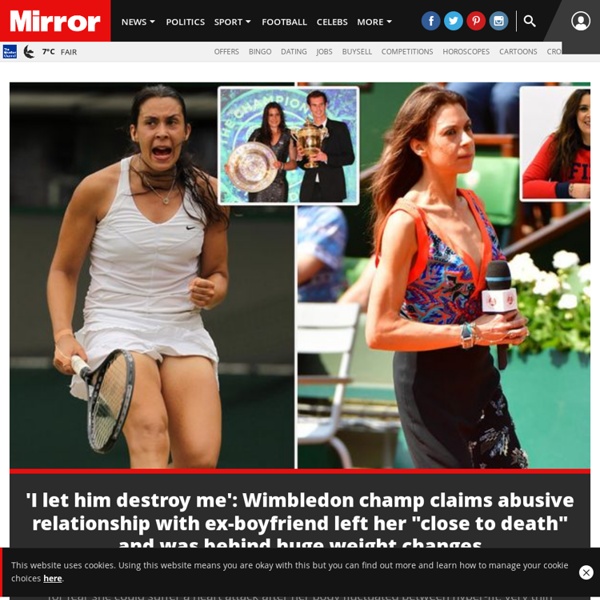 Related:  My interests • pantaire • News • news in the uk • Newspaper

Wimbledon 2013: Stars out to support Andy Murry as he takes on Novak Djokovic Centre Court erupted in deafening cheers as the British number one arrived to begin his bid for Wimbledon glory A deafening roar greeted Andy Murray’s arrival on Centre Court this afternoon as Britain’s number one began his bid for Wimbledon glory. Murray was met with a standing ovation from the All England Club’s most famous court as he and rival Novak Djokovic arrived for their crunch match. Murray had given a rally cry in a recent interview – speaking of the importance of the backing he has received during the tournament. He said: “Your support really can make the difference.”

Photographer records video of Vietnam's Hang Son Doong cave using a drone to capture its colossal sizeThe travellers in the cave appear as specks within the huge landscape dominated by jungle and rocky outcropsHang Son Doong contains jungle-like vegetation, water and sheer cliffs and is the largest cave in the world By Jake Polden For Mailonline Published: 13:51 GMT, 13 March 2015 | Updated: 15:51 GMT, 13 March 2015 It is the largest cave in the world, with its own sheer rocky cliffs, jungle-like vegetation and climate. Buy Withings Pulse O2 Wireless Activity, Sleep and Health Tracker With Withings Pulse O2, you can monitor you activity and sleep, read vital signs and improve your overall health. This versatile, petite tracker includes a wristband and a clip so you can wear it your way, making it easy to keep with you, whatever you're doing. During the day it captures steps, distance walked, elevation climbed and calories burned. At night, it monitors your sleeping cycles. And when asked, it measures your heart rate and blood oxygen level. Wear It Your Way Pulse O2 adapts to your style.

Minneapolis police are asking for help as they search for a 22-year-old woman last seen in a Dinkytown bar. Jennifer Houle was last seen between 1 and 2 a.m. Friday, when she was out with friends at the Blarney Pub, 412 14th Av. Product Detail Delivery and payment To shop at hm.com You must be 18 years of age or older and resident in the U.K. (excluding the Channel Islands and BFPO addresses) to place an order. Your order must total at least £6.00 (after deduction of discounts). Delivery How James Foley gave up escape for friend – former hostage explains - Daily Media Buzz Spanish reporter writes about how the ‘US journalist demonstrated his enormous human depth’ while being held captive by Islamic State James Foley, the US journalist killed by the militant group Islamic State, might have escaped but gave up the attempt so as not to abandon his friend, according to a former fellow hostage. In a serialised account of his own captivity at the hands of the Islamist group in 2013-14, Spanish reporter Javier Espinosa revealed that Foley made two escape attempts with another hostage, British photographer John Cantlie. Isis militants decapitated James Foley in August 2014, five months after Espinosa and another Spaniard, photographer Ricardo García Vilanova, were freed. The two Spaniards were held along with 21 others including Foley and Cantlie in an industrial complex north of Aleppo. “Foley and Cantlie tried to escape twice.

How to Find the Perfect French Language Exchange Partner Can you have a worthwhile French language conversation while panicking over conjugations? Can you express yourself well enough to make French friends when you only know 6 basic verbs? We’ve all been there. All French language learners, from beginners to advanced students, can gain something from conversing in French. 9-Year-Old Boy Fatally Shot In Chicago Was Lured, “Executed” The 9-year-old child who was fatally shot in a Chicago alley Monday afternoon was lured there and “executed,” police say. Tyshawn Lee, described as a fun-loving child who enjoyed video games and basketball, was found with multiple gunshot wounds to his upper body. Police say the child was targeted because of his father’s gang ties and a string of shootings between rival gangs.

Smarthistory Smarthistory offers more than 1500 videos and essays on art from around the world and across time. We are working with more than 200 art historians and some of the world's most important museums to make the best art history resource anywhere. Use the "subject" pulldown menu (go to "Arts and Humanities") at the top of this window or click on the headings below to access our content: Art history basics First things first (you are here) The materials and techniques artists use Art 1010

Joey Feek enters hospice care following terminal cancer diagnosis Hours after a nationwide prayer vigil, Joey + Rory singer Joey Feek was admitted into an Indiana hospital. Her husband says home hospice is next. Feek ended colorectal cancer treatments in late October, choosing to return home instead of continuing chemotherapy. Rory Feek has been providing updates through his This Life I Live blog, and on Monday morning, he revealed hospice was beginning. Personal Development Personal development is a lifelong process. It’s a way for people to assess their skills and qualities, consider their aims in life and set goals in order to realise and maximise their potential. This page helps you to identify the skills you need to set life goals which can enhance your employability prospects, raise your confidence and lead to a more fulfilling, higher quality life. Plan to make relevant, positive and effective life choices and decisions for your future to enable personal empowerment. Although early life development and early formative experiences within the family, at school, etc. can help to shape us as adults, personal development should not stop later in life.

San Jose police at scene of hostage situation - Story SAN JOSE, Calif. (KTVU) - KTVU is learning new information after a gunman held a woman hostage for several hours in San Jose Monday. The man, identified as Leonel Acevedo and the hostage identified as Yolanda Najera, are both dead. Police confirm that Acevedo and Najera knew each other and that Acevedo formerly lived at the residence on the 4400 block of Camden Avenue. The standoff started at around 2:18 p.m. on Monday.