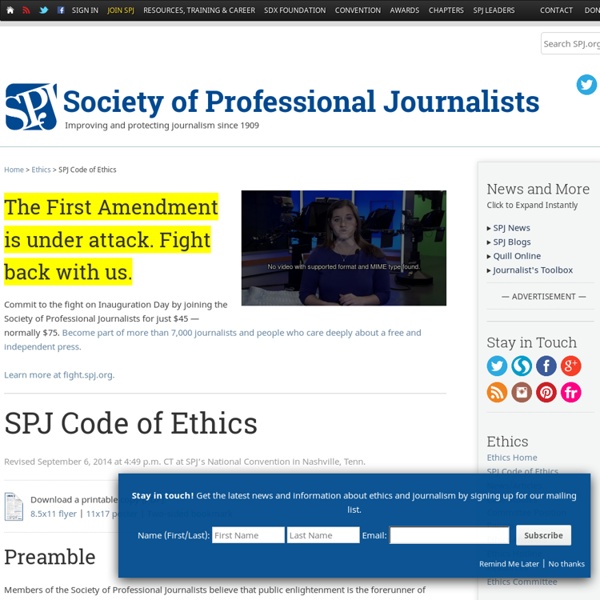 SPJ Code of Ethics Revised September 6, 2014 at 4:49 p.m. CT at SPJ’s National Convention in Nashville, Tenn. Download a printable copy [PDF]:8.5x11 flyer | 11x17 poster | Two-sided bookmark Preamble Members of the Society of Professional Journalists believe that public enlightenment is the forerunner of justice and the foundation of democracy. The Society declares these four principles as the foundation of ethical journalism and encourages their use in its practice by all people in all media. The SPJ Code of Ethics is a statement of abiding principles supported by explanations and position papers that address changing journalistic practices. For an expanded explanation, please follow this link. Supporting documents Click or tap the arrow icon anywhere it appears in the code to explore additional resources the Society’s ethics committee compiled to help people with day-to-day ethics decisions. Additional applications – Case Studies – Committee Position Papers Translations Seek Truth andReport It

Ashley Allen - Syracuse, New York, Intern at WSYR-TV, Bridge Street, Newhouse School of Public Communications, Pepperdine University Ashley is a Multimedia Journalist at KCEN HD News, an NBC affiliate serving Waco, Temple and Killeen in Texas. She completed her M.S. in Broadcast & Digital Journalism at the Newhouse School of Public Communications at Syracuse University. The capstone of this program gave her a unique opportunity to spend six weeks as a Washington-based reporter for WCIA 3 News in Champaign, Illinois. During this time, she enterprised stories about national issues like gun tracing and student loan interest rates. Ashley is an avid Twitter fan and frequently uses social media to promote news content across platforms. Her political stories have been retweeted by prominent members of Congress, such as Senator Dick Durbin and Congressman Rodney Davis.

Mission The Online News Association is composed largely of professional digital journalists. Founded in 1999, ONA now has more than 2,000 professional members whose principal livelihood involves gathering or producing news for digital presentation. The membership includes news writers, producers, designers, editors, photographers, technologists and others who produce news for the Internet or other digital delivery systems, as well as academic members and others interested in the development of online journalism.

An Argument Why Journalists Should Not Abandon Objectivity In “Losing the News: The Future of the News that Feeds Democracy,” published by Oxford University Press, Alex S. Jones, a 1982 Nieman Fellow and director of the Joan Shorenstein Center on the Press, Politics and Public Policy at Harvard University, describes in its prologue his purpose and intent in writing about the “genuine crisis” in news. “It is not one of press bias, though that is how most people seem to view it,” he contends. “Rather, it is a crisis of diminishing quantity and quality, of morale and sense of mission, of values and leadership.” In this excerpt from the chapter “Objectivity’s Last Stand,” Jones reminds readers how objectivity assumed its role in the tradition of American journalism, what “authentic journalistic objectivity” looks like when practiced well, and why it matters so much to the future of news reporting. I define journalistic objectivity as a genuine effort to be an honest broker when it comes to news.

Tools and Resources (for all) Part I: The Origins of Copyright By J.S. Ackerman "The Copyright Office's mission is to promote creativity in society by creating and maintaining the public record through registration of claims and recordation of documents." Objectivity has changed – why hasn’t journalism? The following is cross-posted from a guest post I wrote for Wannabe Hacks. Objectivity is one of the key pillars of journalistic identity: it is one of the ways in which we identify ourselves as a profession. But for the past decade it has been subject to increasing criticism from those (and I include myself here) who suggest that sustaining the appearance of objectivity is unfeasible and unsustainable, and that transparency is a much more realistic aim. Recently I’ve been revisiting some of the research on journalistic objectivity for my inaugural lecture at City University. But as I only mention objectivity once in that lecture, I thought it was worth fleshing out the issue further. Things change

The Myth of Objectivity in Journalism by This page has been accessed since 29 May 1996. The oft-stated and highly desired goal of modern journalism is objectivity, the detached and unprejudiced gathering and dissemination of news and information. In Defence of a Supposedly Outdated Notion: The Range of Application of Journalistic Objectivity Gilles Gauthier (Université Laval) If thought is to go far enough, the imagination must go further. If the will is to accomplish enough, it must imagine more. Electronic Journalism and International Editing Standards Participants also learned how to write and adapt stories for news Web sites examined and compared news Web sites from Arabic-speaking countries and from countries around the world.Photo by Hoda Osman In cooperation with the Prince Ahmed bin Salman Applied Media Institute, ICFJ conducted its first training courses in Saudi Arabia entitled Electronic Journalism and International Editing Standards. The two courses were given to 13 female Yemeni journalists and six female Saudi journalists also participated in the Electronic Journalism course. The Electronic Journalism course tackled differences between the traditional media and New Media, explored different types of news Web sites and experimented with the use of multimedia.

UNT talk-Objectivity in Journalism University of North Texas Nature Writing Symposium talk: “Changing the World One Story at a Time” April 2007 Copyright © 2007 Wendee Holtcamp – bohemian@wendeeholtcamp.com The Fading Mystique of an Objective Press It is worth noting that non-partisan (i.e., objective) reporting coexisted easily in the same penny papers with such pungent sensationalism. “Neutrality will sleep with anyone,” as the saying goes. Right there at the creation of the modern press, paradoxes abounded. Bennett and other penny publishers touted nonpartisanship, yet on issues that were universally applauded the pennies were rabid advocates. Bennett for example was always super patriotic and always proslavery, both being conducive to pleasing his readers and thus to producing profits. During the 20th century, the ideal of objectivity in news coverage went from strength to strength.

The objectivity norm in American journalism* Why did the occupational norm of ‘objectivity’ arise in American journalism? This question has attracted the interest of many journalism historians but it has not previously been examined as an instance of a more general social phenomenon, the emergence of new cultural norms and ideals. Four conditions for the emergence of new norms are identified – two having to do with the self-conscious pursuit of internal group solidarity; and two having to do with the need to articulate the ideals of social practice in a group in order to exercise control over subordinates and to pass on group culture to the next generation. Reviewing the history of the professionalization of American journalism, this essay identifies the late 19th and early 20th century as the period when these conditions crystallized.