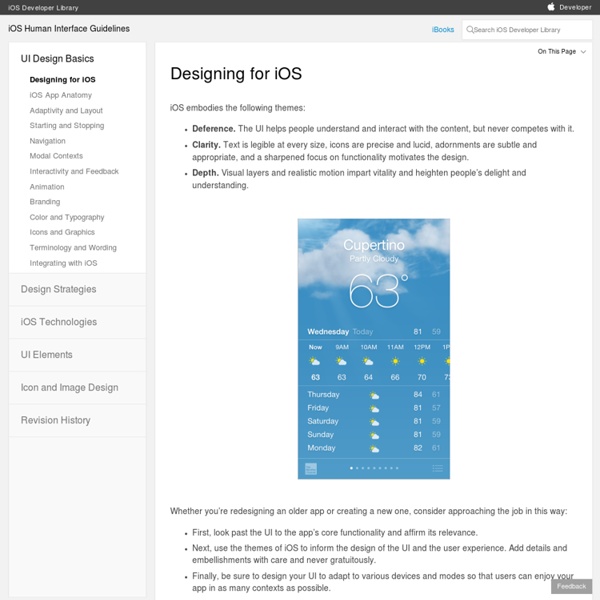 Everything You’ve Been Told About Mobile App Design By Developers Is Bullshit | Usability Counts | User Experience, Social Media Or, Design Your Own Mobile Application With These Nine Easy Steps… 2011 is the year of mobile. This year is the tipping point that’s really going to turn the World Wide Web into a “platform doesn’t matter” medium. We’ve been working on a few applications as prototypes (iPad, iPhone, and Android), and I’m at version 1.1 of Pick An Excuse (finally iOS 3 compatible). If you have even an inkling of an idea, you should work on your own application — just for the experience. It’s All about Context, Baby I do all my best user research at the local bars here in San Francisco, California. Watching people use devices at Tony Nik’s is one of my favorite pastimes. Why? It’s because of the context. The fun thing about it is that all I have to do is ask a few questions, and they’ll tell me everything they love about their device — without having to buy them a drink. Keep It Simple There’s nothing worse than downloading an application that’s overly complicated. Make It Social It’s a phone! And that’s cool.

Mapping In 1932, Charles O. Paullin and John K. Wright published Atlas of the Historical Geography of the United States, a reference of almost 700 maps about a varied set of topics, such as weather, travel, and population. In this digital edition we've tried to bring—hopefully unobtrusively and respectfully—Paullin and Wright’s maps a bit closer to that ideal. Not only are the maps overlaid on a slippy map, but the lab also added simple interactions with tool tips and animation so you can look more specifically at the data. I could spend all day (or several days) looking through this. Guide to Website Navigation Design Patterns In web design, there are certain common design patterns that are used for interaction. Site navigation has a wide variety of common and familiar design patterns that can be used as a foundation for building effective information architecture for a website. This guide covers popular site navigation design patterns. For each site navigation design pattern, we will discuss its common characteristics, its drawbacks, and when best to use it. Top Horizontal Bar Navigation Top horizontal bar navigation is one of the two most popular kinds of site navigation menu design patterns out there. The top horizontal bar navigation design pattern is sometimes paired with drop-down menus whereby hovering on a navigation item reveals second-level child navigation items. Common Characteristics of Top Horizontal Bar Navigation Navigation items are text links, button-shaped, or tabbed-shapedHorizontal navigation is often placed directly adjacent to the site’s logoIt is often located above the fold Tabs Navigation

Tag cloud foundation-l word cloud, created with the complete gzip'ed list archives (without duplicate emails from archives and all headers and quoted text in body), using IBM Word Cloud Generator build 32.[1] A tag cloud with terms related to Web 2.0 History[edit] In the language of visual design, a tag cloud (or word cloud) is one kind of "weighted list", as commonly used on geographic maps to represent the relative size of cities in terms of relative typeface size. An early printed example of a weighted list of English keywords was the "subconscious files" in Douglas Coupland's Microserfs (1995). A German appearance occurred in 1992.[3] The specific visual form and common use of the term "tag cloud" rose to prominence in the first decade of the 21st century as a widespread feature of early Web 2.0 websites and blogs, used primarily to visualize the frequency distribution of keyword metadata that describe website content, and as a navigation aid. Types[edit] Frequency[edit] Categorization[edit] and for

Case Study: UX, Design, and Food on the Table (One of the common questions I hear is how to reconcile design and user experience (UX) methods with the Lean Startup. To answer, I asked one of my favorite designers to write a case study illustrating the way they work, taking us step-by-step through a real life redesign. This is something of an IMVU reunion. The attendees at sllconf 2010 were wowed by Food on the Table's presentation. If you weren't there, be sure to watch the video. Manuel Rosso was IMVU's first VP of Marketing, and is now CEO of Food on the Table, one of the leading lean startups in Austin. In this case study, Laura takes us inside the design process in a real live startup. A lot of people ask me whether design fits into the lean startup process. This is simply not true. A couple of months ago, Manuel Rosso, the CEO of Food on the Table came to me with a problem. As a bit of background, Food on the Table helps people plan meals for their families around what is on sale in their local grocery stores. Key Takeaways:

Isaac Hall's answer to Dropbox: Why is Dropbox more popular than other tools with similar functionality Usability News 91 - Shrestha By S. Shrestha & K. Lenz Summary: This article discusses users’ visual scan paths of web pages containing text and/or pictures while conducting browsing and searching tasks. User performance on three usability tasks on an e-commerce website is described. Results show that users follow a fairly uniform scan path when browsing through pictures, and a more random path while specifically searching through them. According to Nielsen (2006) users tend to focus on the left side of the body of a webpage when reading and fixate very little on information located on the right-hand side. Figure 1. This study investigated whether the "F" pattern style of viewing was dependent on the page content (text-based vs. picture-based) and/or on the user task (searching vs. browsing). Twenty undergraduate students (17 female, 3 male) at Wichita State University participated in this study. Figure 2a. Gaze Patterns While Viewing a Picture Page Figure 3.