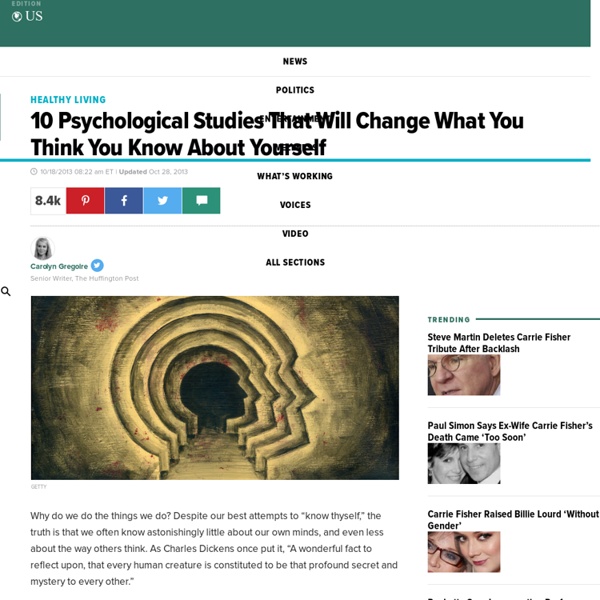 Why do we do the things we do? Despite our best attempts to “know thyself,” the truth is that we often know astonishingly little about our own minds, and even less about the way others think. As Charles Dickens once put it, “A wonderful fact to reflect upon, that every human creature is constituted to be that profound secret and mystery to every other.” Psychologists have long sought insights into how we perceive the world and what motivates our behavior, and they’ve made enormous strides in lifting that veil of mystery. We all have some capacity for evil. Arguably the most famous experiment in the history of psychology, the 1971 Stanford prison study put a microscope on how social situations can affect human behavior. The experiment, which was scheduled to last for two weeks, had to be cut short after just six days due to the guards’ abusive behavior — in some cases they even inflicted psychological torture — and the extreme emotional stress and anxiety exhibited by the prisoners. Getty

Six Habits of Highly Empathic People Republished from greatergood.berkeley.edu By Roman Krznaric If you think you’re hearing the word “empathy” everywhere, you’re right. It’s now on the lips of scientists and business leaders, education experts and political activists. But there is a vital question that few people ask: How can I expand my own empathic potential? Empathy is not just a way to extend the boundaries of your moral universe. According to new research, it’s a habit we can cultivate to improve the quality of our own lives. But what is empathy? The big buzz about empathy stems from a revolutionary shift in the science of how we understand human nature. Over the last decade, neuroscientists have identified a 10-section “empathy circuit” in our brains which, if damaged, can curtail our ability to understand what other people are feeling. But empathy doesn’t stop developing in childhood. Habit 1: Cultivate curiosity about strangers Highly empathic people (HEPs) have an insatiable curiosity about strangers.