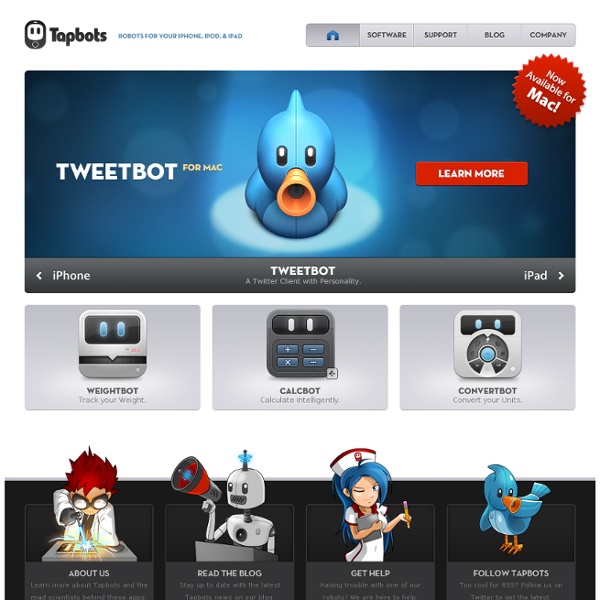 Ultradox Apple Archives ~ Flyosity by Mike Rundle Entries From The Apple Category: Back when I was doing design work for clients, it seemed like my work would get re-purposed by fledgling and not-so-fledgling designers every month. Sometimes I'd get a tip in my email about a theft that someone saw, or sometimes the offenders would link the assets right off my client's website, but regardless of how I found out about the theft, it'd piss me off more than anything else. I was the one who opened Photoshop, I cranked through iteration after iteration, I thought of execution details in the shower, I stayed up late at night, and then someone else just takes all that work and passes it off as their own. Lack Of Understanding A few friends and I were the co-founders of 9rules, one of the largest independent blog networks of its day. The dumbest thing about using the 9rules leaf logo for something other than 9rules is that the logo had a specific meaning. "Here’s the problem with copying: Copying skips understanding. 4. 5. 6. 7. Why is this?

9 Articles And Tutorials To Learn PSD To HTML Conversion By Akhter on September 5, 2012 9 Articles And Tutorials To Learn PSD To HTML Conversion Don't Forget to participate in a contest where you can win an amazing e-Commerce template from TemplateMonster. For today’s round up, we are presenting 9 best articles and tutorials on how to learn conversion of HTML from PSD. In this collection, we have put together some useful links to good resources where you can learn different methods of coding up PSDs into HTML or CSS templates. Here is the complete list of 9 best articles that help you learn how to convert PSD to HTML. PSD to XHTML/CSS Conversion In this web design tutorial, you’ll see a process for converting a Photoshop mockup to working HTML/CSS template. Slice and Dice that PSD In this video tutorial, we’ll be slicing up a PSD, dicing it for the web, and serving it on a warm hot plate. Converting a Design From PSD to HTML Here you will learn some techniques for converting a Design From PSD to HTML.

Encrypt your files with a drop Designing Convertbot With the surprising success of Weightbot, it was only a matter of time before we would take on the challenge of outdoing ourselves. We knew people were expecting something big from Tapbots the second time around so what’s more impressive on the iPhone platform than a unit converter? Pretty much anything. In name alone, Convertbot is probably the last application people would expect to see from us. Getting Started The first step was to set up the groundwork for the application. The audience was also an important factor. Designing the Interface It didn’t take long to come up with a working solution for the interface. The look and feel of the app had to build upon the Tapbots Brand. The User Experience The 3-Step Unit Selection Process We’ve had a few complaints about this and I knew this would be a an issue for some the moment I asked Paul to implement it. There’s also pseudo-realism in the way the mechanics of the app works. Limited Data What is Intuition? The Hurdles

Icon Library ! IceRocket real-time search Quirk eMarketing Blog | GottaQuirk How to Write an Add-on for Google Docs and Sheets - Video Tutorial Google Add-ons add new capabilities to Google Docs and Sheets. This video tutorial explains how you can create your own Google add-ons using HTML, CSS and JavaScript. You have seen examples of some really useful add-ons for Google Docs but wouldn’t it be great if you could write your own add-on, one that adds new features to your Google Docs, one that makes you a rock star among the millions of Google Docs users. Well, it ain’t that difficult. This step-by-step tutorial (download) will walk you through the process of creating your own add-on for Google Docs. Ok, lets’s get going. Step 1. Step 2. Step 3. Step 4. Save your changes and then choose onOpen from the Run menu inside the Script editor. You’ll see a new Google Maps option under the Add-ons menu. Share your Google Add-ons with other Google Docs users Now that your first Google add-on is ready, you may want to distribute it to other users of Google Docs.

Flare | Data Visualization for the Web Find the Postal Address of any Location on Google Maps With Google Maps Lookup, you can quickly determine the approximate postal address of any location on the world map. To get started, drag the red marker anywhere on the Google Map and the address details (including the latitude and longitude) of that place will display in the pop-up window. Reverse Geocoding with Google Maps Internally, the tool uses the Geocoding features of Google Maps to find the address of a particular point. When you drag the marker, the geographic coordinates of that place are passed to the Geocoding API of Google Maps which then translates the location coordinates into a human-readable physical address.

50 Great Examples of Data Visualization Wrapping your brain around data online can be challenging, especially when dealing with huge volumes of information. And trying to find related content can also be difficult, depending on what data you’re looking for. But data visualizations can make all of that much easier, allowing you to see the concepts that you’re learning about in a more interesting, and often more useful manner. Below are 50 of the best data visualizations and tools for creating your own visualizations out there, covering everything from Digg activity to network connectivity to what’s currently happening on Twitter. Music, Movies and Other Media Narratives 2.0 visualizes music. Liveplasma is a music and movie visualization app that aims to help you discover other musicians or movies you might enjoy. Tuneglue is another music visualization service. MusicMap is similar to TuneGlue in its interface, but seems slightly more intuitive. Digg, Twitter, Delicious, and Flickr Internet Visualizations