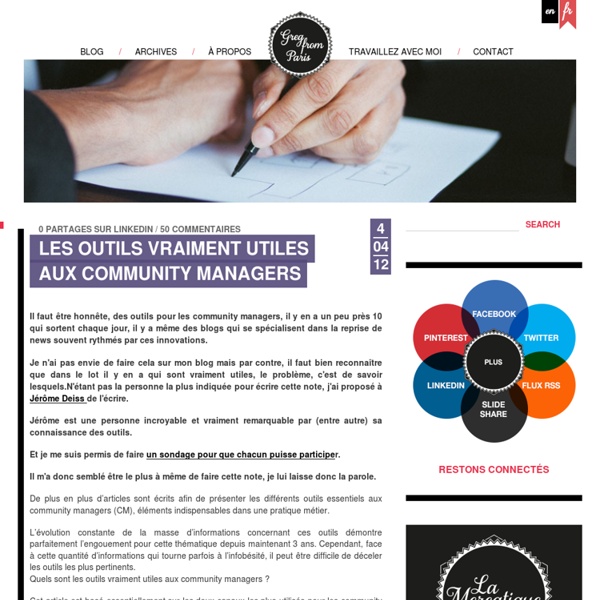 Get Skilled to Create Engaging e-Learning by Jonathan Shoaf Many of us know the common scenarios.Victor has a great PowerPoint deck on the new widget. Make it available online.Sally created some great videos on changes to the old process. Post those on the corporate site.Work with Jordan to put the face-to-face training in Adobe Captivate so we can roll it out to the rest of the organization at low cost. Oh, and we don't have time to do anything elaborate!

Social Media 101: A Guide to the Top 5 Social Media Tools for Business Here's everything you need to know about what platform is best for each business goal you're trying to achieve. February 13, 2012 To put it mildly, social media tools are transforming the way we communicate. These days, people send a tweet instead of an e-mail and write on Facebook walls instead of dial phone numbers. How to Customize your Facebook Fan Box With the addition of a facebook fan box to your website you’re not only benefiting your end users but also yourself. The fb fan box allows users to directly view how many friends you have on your facebook page and also allows them to become a fan with just one click. The only potential downsides to adding a fan box to your page is that it is not easy to customize or the original styling just doesn’t match up with the unique style of your site.

New LinkedIn Pages for Higher Education sector LinkedIn, the network that aims to link professionals with potential employers just launched its University Pages. These new pages are meant to help prospective students find the college or university that fits those best. Connecting with those institutions, their alumni, current students or even prospective students are some of the features students will be able to use starting September 12. Additionally, LinkedIn has brought down student limit age from 18 to 14 in the US and Canada to help grow its base of professionals networking on its platform. Two hundreds colleges and universities got the beta University Page.

Don’t Overreact to a Potential Social Media Crisis We do a lot of crisis management and crisis training for clients. There are certain new “truths” about how crisis can unfold across digital and social media that can put business at risk. The irresponsible videos from rogue employees at Domino’s Pizza, the thoughtless tweets from Kenneth Cole, and Tesco's struggle with an angry customer all had an impact on business. The truths or qualities of social-fueled crisis are unmistakable. In social media, they can flare faster. Messages in social media can jump into traditional media thus flaring a lot more social media.

6 Emerging Technologies From the 2012 K-12 Horizon Report Update: The report published June 11. Mobile devices, tablets and apps could become mainstream with education in a year or less, according to the "2012 Horizon Report: K-12 Edition." While the report from the New Media Consortium won't be released until June, the Consortium for School Networking hosted a webinar on Tuesday, May 15, to preview the results. The 46 members of the Horizon K-12 Advisory Board narrowed a long list of emerging technologies down to six that the New Media Consortium highlighted in the "2012 Horizon Report K-12 Edition." "All of these technologies are progressing forward, and we ask our experts to identify just the six that they think are going to be the most interesting over time," said Larry Johnson, CEO of the New Media Consortium and founder of the Horizon Project. About a third of the committee members are new every year, so depending on who's participating, the top six technologies can come and go.

Bitly data shows the best times to post links to Facebook, Twitter and Tumblr Bitly, the URL shortener of choice for most people, has analyzed its click-tracking data to find the optimal days and times for posting links to social media. The results show interesting, distinct patterns among Twitter, Facebook and Tumblr. On Twitter, the best window is 1 to 3 p.m. Mondays through Thursdays.

7 Strategies to Make Facebook SEO Friendly Posted on 05'11 Dec Posted on December 5, 2011 along with 23 JUST™ Creative Comments This is a guest article contributed by Richard Larson. Facebook represents a fantastic marketing opportunity for any business via shares & referrals, however, just like WordPress and other platform based user sites, it’s critical to incorporate SEO strategies into your Facebook pages in order to get exposure out of them. The Beginner's Guide to Twitter Update: This post was updated November 2013 to reflect current statistics and tools. Do you have a parent, friend or colleague ready to ditch his or her digital training wheels and head into Twitter's open wilderness? These pointers should get them started.

Local Facebook pages outperform corporate pages in terms of reach, engagement percentage, study finds Facebook pages for local branches of a business generate greater reach and engagement than their corporate counterparts, according to a study by Mainstay Salire in collaboration with Hearsay Social. On average, a Facebook post from a local division reaches five times the percentage of fans as a post from a corporate page. The study also found local posts see engagement from eight times as many of the fans reached compared to corporate posts. These results suggest that companies should consider maintaining Facebook pages for local stores or branches in addition to a main corporate page. “Conventional wisdom is that personalized and targeted communications win out,” Hearsay Social CEO Clara Shih tells us.

3 Shifts to the Paradigm of Online Professional Development By Rich Kiker Professional development has been something that is “done to” educators for far too long. We are in an era where teachers are rapidly moving to social media for learning while recognizing the irrelevance of traditional continuing education courses. The need for job-embedded, project-based, and learner-centered solutions is quite clear to us yet the institutionalized graduate-course and professional development model has not yet evolved to meet our needs. The Digital Teacher Series is filling this void with the highest standard of eLearning professional development looking to reshape the way online learning is delivered. What does high-quality eDesign look like? Corporations Transforming into Social Businesses, Says Second Study of Social Media Trends from FedEx and Ketchum MEMPHIS AND NEW YORK, July 12, 2012—Social business—a company’s move from a presence on social platforms to strategic engagement that supports business goals, fosters brand affinity and generates co-created value—is no small undertaking for corporations, but it is undoubtedly the direction in which top companies are heading, according to an in-depth study on social media trends released today. The move to social business for many of the world’s most recognized companies faces a hurdle, however: Social media tools have radically transformed the way people engage with the world around them, yet many of the corporations studied that cater to and employ these individuals appear to have been slower to find ways to effectively connect in these channels. The 2012 FedEx/Ketchum Social Media Benchmarking Study, presented jointly by FedEx and Ketchum, analyzed the changing impact of social media on business today.