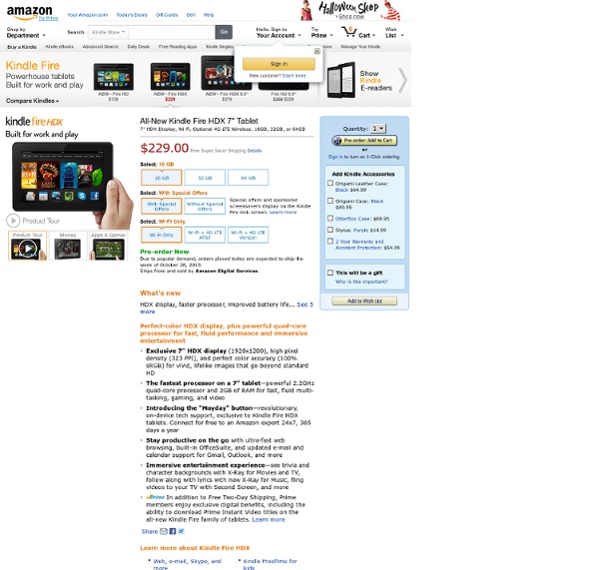 Amazon Kindle Fire HD - Tablets The Kindle Fire HD (2013) is Amazon's new ultrabudget tablet that starts at $139. At just $20 more than the company's e-ink Kindle Paperwhite reader, it's at a great price and if all you plan to do is stream videos and music, read books, do some light gaming, and occasionally surf the Web, it will certainly meet your needs. The problems arise if you wish to do anything more. With this entry-level model -- basically the 2012 Fire HD with updated hardware -- you're giving up cameras, and settling for a miniscule amount of storage. Indeed, the 8GB of storage in the $139 model actually works out to less than 5GB of usable space; that's not enough to fit most HD movies or more than a couple of episodes of an HD TV show. That's why I recommend starting with the $169, 16GB version of the tablet. That's where the $229 Fire HDX comes in. But if you're really set on spending less than $200, the 2013 Fire HD makes for a serviceable tablet, so long as you temper your expectations.

Kindle - Best-Selling Ereader - Only $69 Bombshell Starter Box | Julep As a Bombshell, you're a confident frill-seeker with magnetic appeal. You adore bold, glam colors and anything that sparkles. Your Welcome Box includes: Zelda - Bombshell: Pink champagne metallicKendra - It Girl: Army green frostMighty Nail & Cuticle Serum: This peptide-fueled treatment quickly transforms dry, damaged cuticles and encourages strong, healthy nail growth. It's good to be a Maven... First access to new beauty innovations & 10 limited-run nail colors each monthOver $40 worth of polish and product for only $19.99/monthFree shipping and 20% off at julep.comEvery month you can preview your box, try a new style, add extras, or send to a friend (at no extra charge) You've got options: Try a new style each month. To extend the life of your mani, start each layer by sealing your free edges.

Kindle Fire HD 8.9" 4G - Latest Wireless Technology with 4G LTE Hands-On With Amazon's New Kindle Fire HD | Gadget Lab Playing with fire. Photo: Dennis Provost/Wired Amazon’s push to sell consumers more content by selling them hardware they can use to buy and consume that content continued on Thursday. At a press event in Santa Monica, the company introduced not only updated Kindles and a beefier Kindle Fire but also three new Kindle Fire HD tablets. After the presentation, we got a chance to get our nerdy hands on the newest HD version of the Fire. The is the Kindle Amazon hopes will take on the iPad in the tablet space. buttons to the top. The external button has been moved from the bottom to the top on the Fire HD. Amazon’s customized Android skin remains, but with tweaks that improve navigation. The speakers on the back are hidden within the distinctive black stripe that, even if not intentionally decorative, sets the Kindle Fire HD apart from other tablets. All these tests were done on the 7-inch Kindle Fire HD.

Kindle Paperwhite Touch Screen E-Reader with Light User blog:3RDRANGER/Battlefield 4 DLC Coming First to Xbox One - Battlefield Wiki - Battlefield 3, Bad Company 2, Weapons, Levels, Maps, Characters and more! Today is supposed to be day when EA 's E3 2013 conference takes place. And of course, Battlefield 4 will be shown there. But news surfaced of a DLC expansion pack for Battlefield 4 , called " Second Assault ", coming first to Microsoft's next-gen console, the Xbox One . This picture is concrete proof that this is not false: Well, what do you think of this? Rangers Lead The Way 19:36, June 10, 2013 (UTC) Source(s) Follow us on: Latest News...