The Science of Dreams and Why We Have Nightmares 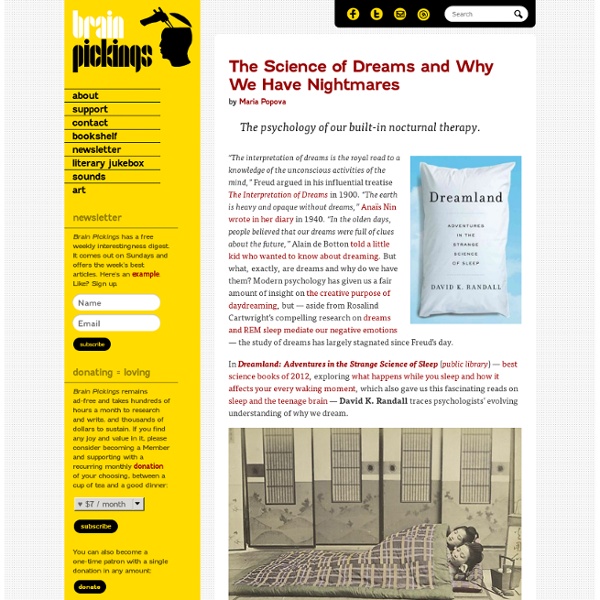 by Maria Popova The psychology of our built-in nocturnal therapy. “The interpretation of dreams is the royal road to a knowledge of the unconscious activities of the mind,” Freud argued in his influential treatise The Interpretation of Dreams in 1900. “The earth is heavy and opaque without dreams,” Anaïs Nin wrote in her diary in 1940. In Dreamland: Adventures in the Strange Science of Sleep (public library) — best science books of 2012, exploring what happens while you sleep and how it affects your every waking moment, which also gave us this fascinating reads on sleep and the teenage brain — David K. Freud’s theories — premised on the idea that the symbolism of dreams encoded the dreamer’s subconscious desires and concerns, often of a sexual nature — were systematically challenged and dismissed over the course of the 20th century, but without much of a viable alternative theory. And yet theories continue to differ. Hartmann sees dreams as a form of built-in nocturnal therapy.

Why Time Slows Down When We’re Afraid, Speeds Up as We Age, and Gets Warped on Vacation by Maria Popova “Time perception matters because it is the experience of time that roots us in our mental reality.” Given my soft spot for famous diaries, it should come as no surprise that I keep one myself. Perhaps the greatest gift of the practice has been the daily habit of reading what I had written on that day a year earlier; not only is it a remarkable tool of introspection and self-awareness, but it also illustrates that our memory “is never a precise duplicate of the original [but] a continuing act of creation” and how flawed our perception of time is — almost everything that occurred a year ago appears as having taken place either significantly further in the past (“a different lifetime,” I’d often marvel at this time-illusion) or significantly more recently (“this feels like just last month!”). Discus chronologicus, a depiction of time by German engraver Christoph Weigel, published in the early 1720s; from Cartographies of Time. So what makes us date events more accurately?

Drugs That May Cause Memory Loss Side Effect How they can cause memory loss: Benzodiazepines dampen activity in key parts of the brain, including those involved in the transfer of events from short-term to long-term memory. Indeed, benzodiazepines are used in anesthesia for this very reason. When they're added to the anesthesiologist's cocktail of meds, patients rarely remember any unpleasantness from a procedure. Midazolam (Versed) has particularly marked amnesic properties. Alternatives: Benzodiazepines should be prescribed only rarely in older adults, in my judgment, and then only for short periods of time. If you take one of these meds for insomnia, mild anxiety or agitation, talk with your doctor or other health care professional about treating your condition with other types of drugs or nondrug treatments. Be sure to consult your health care professional before stopping or reducing the dosage of any benzodiazepine.

Smithsonian X 3D Why some memories last and others fade We are more likely to form lasting memories when there is coordinated activity between two specific brain regions, MRI scans show. “When memories are supported by greater coordination between different parts of the brain, it’s a sign that they are going to last longer,” says Lila Davachi, an associate professor in the Department of Psychology and Center for Neural Science at New York University. It is commonly understood that the key to memory consolidation—the cementing of an experience or information in our brain—is signaling from the brain’s hippocampus across different cortical areas. Moreover, it has been hypothesized, but never proven, that the greater the distribution of signaling, the stronger the memory takes hold in our brain. To determine if there was scientific support for this theory, Davachi and a colleague examined how memories are formed at their earliest stages through a series of experiments over a three-day period. Source: NYU

Map of the Brain’s Connections We knew anatomy could be gorgeous, but this is beyond anything else we’ve ever seen, and it’s guaranteed to be something you haven’t seen, being the first 3D image of a brain’s connections. Van Wedeen, a Harvard radiology professor, is awestruck: “We’ve never really seen the brain – it’s been hiding in plain sight.” Conventional scanning has offered us a crude glimpse, but scientists such as Wedeen aim to produce the first ever three-dimensional map of all its neurons. They call this circuit diagram the “connectome”, and it could help us better understand everything from imagination and language to the miswirings that cause mental illness. Photographed above is the 3D image of an owl-monkey’s brain. Link [via]

Possibility of selectively erasing unwanted memories The human brain is exquisitely adept at linking seemingly random details into a cohesive memory that can trigger myriad associations -- some good, some not so good. For recovering addicts and individuals suffering from post-traumatic stress disorder (PTSD), unwanted memories can be devastating. Former meth addicts, for instance, report intense drug cravings triggered by associations with cigarettes, money, even gum (used to relieve dry mouth), pushing them back into the addiction they so desperately want to leave. Now, for the first time, scientists from the Florida campus of The Scripps Research Institute (TSRI) have been able to erase dangerous drug-associated memories in mice and rats without affecting other more benign memories. The surprising discovery, published this week online ahead of print by the journal Biological Psychiatry, points to a clear and workable method to disrupt unwanted memories while leaving the rest intact. Changing the Structure of Memory

The Science Behind Intuition Almost every Radical Remission cancer survivor I’ve studied used their intuition to help make decisions related to their healing process. Research on intuition and following your ‘gut’ instinct may explain why. Scientists have discovered that humans appear to have two, very different “operating systems.” System 1 is our quick, instinctual, and often subconscious way of operating – it is controlled by our right brain and by other parts of our brain that have been around since prehistoric times, known as the “limbic” and reptilian” parts of our brain. System 2 is our slower, more analytical, and conscious way of operating – it is controlled by our left brain and by newer parts of our brain that have only developed since prehistoric times (also known as the “neocortex”). But why, exactly, should we trust our gut instinct? Note: This post was based on an excerpt from the New York Times Bestselling book, Radical Remission: Surviving Cancer Against All Odds. Dr. ©Kelly A.

Journal of Nuclear Physics Intuition, Gut Feeling, and the Brain Has there ever been a time when you swear that you know about certain things and events that will happen, although you cannot describe how you come to know it? While you might call this as your ‘gut feeling,’ this sense – known as intuition – does not necessarily arise from your stomach. Below you can learn more your nexplainable instinct – and how your brain gives you the sense of ‘doing what you need to do.’ What is Intuition? Also known as a hunch or gut feeling, it is defined as convincing, hasty feelings whose origins cannot be explained by the individual himself. The Brain and Intuition Intuition is not a figment of a person’s imagination or is it literally coming from a person’s gut– it is the result of the activities within the different brain regions. The cerebral cortex, also known as the cerebellum, also affects the development of hunches in humans. Locus ceruleus, a minute nucleus located in the pons, is said to generate one’s gut feeling as well. The Real Deal

You Remember That Wrong: Brain Distorts Memories Every Time It Recalls Them | The Mary Sue Got a treasured memory? It’s okay to get a little sappy, we all do, whether it’s that perfect night with a special someone or that dungeon crawl that finally went exactly according to plan. If you’re remembering that thing right now, for the love of God, stop! It just won’t be the same the next time you recall it. In research that should surprise no one, our brains are constantly betraying us, transforming our memories every time we think about them. According to a recent study, just as you can’t step in the same river twice, your memories are changed by the act of recalling them, meaning that every memory we have is colored by the times we’ve recollected it before.The research, conducted by Northwestern Medicine and published this week in the Journal of Neuroscience, shows that recalling a memory more often makes that memory less accurate, and that every time you take a memory off the shelf in your brain, you put it back just a tiny bit different. (via Medical Xpress)

Modifying DNA May Wipe Away Old Memories A clean slate—that’s what people suffering from posttraumatic stress disorder (PTSD) crave most with their memories. Psychotherapy is more effective at muting more recent traumatic events than those from long ago, but a new study in mice shows that modifying the molecules that attach to our DNA may offer a route to quashing painful memories in both cases. One of the most effective treatments for PTSD is exposure psychotherapy. A behavioral psychologist asks a patient to recall and confront a traumatic event; each time the traumatic memory is revisited, it becomes susceptible to editing through a phenomenon known as memory reconsolidation. Yet this therapy works only for recent memories. Researchers at the Massachusetts Institute of Technology, led by neurobiologist Li-Huei Tsai, have now uncovered a chemical modification of DNA that regulates gene activity and dictates whether a memory is too old for reconsolidation in mice.

Scientists create new memories by directly changing the brain Sep. 10, 2013 — By studying how memories are made, UC Irvine neurobiologists created new, specific memories by direct manipulation of the brain, which could prove key to understanding and potentially resolving learning and memory disorders. Research led by senior author Norman M. Weinberger, a research professor of neurobiology & behavior at UC Irvine, and colleagues has shown that specific memories can be made by directly altering brain cells in the cerebral cortex, which produces the predicted specific memory. Study results appeared in the August 29 issue of Neuroscience. During the research, Weinberger and colleagues played a specific tone to test rodents then stimulated the nucleus basalis deep within their brains, releasing acetylcholine (ACh), a chemical involved in memory formation.

How Many of Your Memories Are Fake? - Erika Hayasaki One afternoon in February 2011, seven researchers at the University of California, Irvine sat around a long table facing Frank Healy, a bright-eyed 50-year-old visitor from South Jersey, taking turns quizzing him on his extraordinary memory. Observing from outside of the circle, I tape-recorded the conversation as one researcher tossed out a date at random: December 17, 1999. “Okay,” Healy replied, “Well, December 17, 1999, the jazz great, Grover Washington Jr., died while playing in a concert.” “What did you eat that morning for breakfast?” “Special K for breakfast. These are the kinds of specific details that writers of memoir, history, and journalism yearn for when combing through memories to tell true stories. In another office nearby on campus, you can find Professor Elizabeth Loftus, who has spent decades researching how memories can become contaminated with people remembering—sometimes quite vividly and confidently—events that never happened. “Why did evolution do that?”