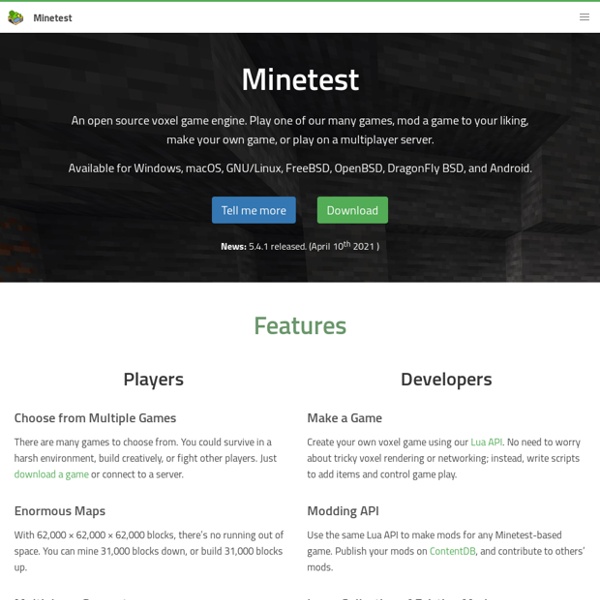 Minetest - Page de téléchargement Thank you for trying out Minetest. Are you a new user? Have a look at our Getting Started, FAQ and Tutorials pages on our wiki. You may also want to look at some subgames. Subgames form a foundation for the game using Lua scripts. Different subgames have different objectives, such as survival, building or Player vs Player. OpenPatrician Y-O-Y? (Part I) Almost every time I tell someone new about this project the question ‚why‘ pops up inadvertently. While there are many reasons to motivate me for this project, one of the driving ones from the beginning was to have a project that allows to experiment with certain frameworks and technologies. In a project with paying customers you most often do not have the freedom to do this.

Teaching With Pokemon Go: What's Possible? - Teaching With Pokemon Go: What’s Possible? by Jonathan Cassie Since its summertime release, Pokémon Go! has become a singular sensation in gaming. Scratch Offline Editor You can install the Scratch 2.0 editor to work on projects without an internet connection. This version will work on Mac, Windows, and some versions of Linux (32 bit). Note for Mac Users: the latest version of Scratch 2.0 Offline requires Adobe Air 20. To upgrade to Adobe Air 20 manually, go here. Scratch Offline Editor Mana Plus Portable A free open source 2D MMORPG in your pocket Mana Plus is a free and open source MMORPG (Massively multiplayer online role-playing game) game with the looks of "old-fashioned" 2D RPG games such as those released for the SNES/Super Famicom in the 90's. The game client is free and there is no monthly fee required.

What is it? « Algodoo Algodoo is a unique 2D-simulation software from Algoryx Simulation AB. Algodoo is designed in a playful, cartoony manner, making it a perfect tool for creating interactive scenes. Explore physics, build amazing inventions, design cool games or experiment with Algodoo in your science classes. Algodoo encourages students and children’s own creativity, ability and motivation to construct knowledge while having fun. Making it as entertaining as it is educational.

Apps/Dia Welcome to Dia's new homepage. Dia is a GTK+ based diagram creation program for GNU/Linux, MacOS X, Unix, and Windows, and is released under the GPL license. Dia is roughly inspired by the commercial Windows program 'Visio,' though more geared towards informal diagrams for casual use. The Dark Army: Uprising mod for Return To Castle Wolfenstein Yesterday, a new version (1.1) of The Dark Army: Uprising's English (US) edition was released as a Christmas gift to all fans of both the modification and the original game. If you already own the previous version of the mod, no need to worry, just click on the left button to download the patch to upgrade it. If you don't have the mod installed on your computer, you can download its already-patched full version by clicking on the right button. For recall, you don't need the original game installed on your computer to play. Hier, une nouvelle version (1.1) de l'édition en Anglais (US) de The Dark Army: Uprising est arrivée telle un cadeau de Noël à tous les fans du mod mais aussi du jeu original.

RealRTCW After almost a month of work RealRTCW 2.0 was finally released! It includes 8 new weapons along with MP44 which was added in RealRTCW 1.0. It also includes 3 new ammo types. Now all new ammo types have proper world model. Using Games for Serious Learning in High School Video games can engage players with more than just action. Impactful games are about serious topics and can create conditions for deeper learning. Like a good novel or cinematic experience, these types of games often have a strong narrative thread, appropriate for English Language Arts (ELA) classrooms. Consider having students play one of the games below, and then, to measure learning outcomes, use traditional assessment strategies like matching claims to evidence.