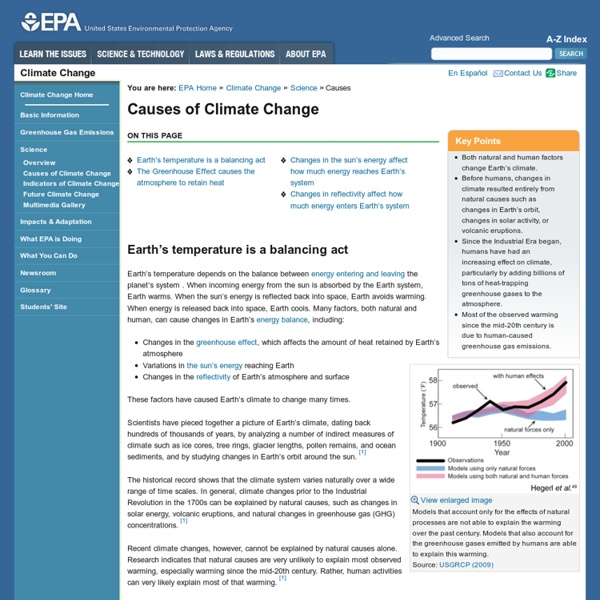 Key Points Both natural and human factors change Earth’s climate. Before humans, changes in climate resulted entirely from natural causes such as changes in Earth’s orbit, changes in solar activity, or volcanic eruptions. Earth’s temperature is a balancing act Earth’s temperature depends on the balance between energy entering and leaving the planet’s system . View enlarged image Models that account only for the effects of natural processes are not able to explain the warming over the past century. Changes in the greenhouse effect, which affects the amount of heat retained by Earth’s atmosphere Variations in the sun’s energy reaching Earth Changes in the reflectivity of Earth’s atmosphere and surface These factors have caused Earth’s climate to change many times. The historical record shows that the climate system varies naturally over a wide range of time scales. Recent climate changes, however, cannot be explained by natural causes alone. Radiative Forcing View enlarged image References: Related:  Climate Change • Greenhouse Gases and Paleoclimatology - Project • Climate/Energy Web Page Resources

Causes Most climate scientists agree the main cause of the current global warming trend is human expansion of the "greenhouse effect"1 — warming that results when the atmosphere traps heat radiating from Earth toward space. Certain gases in the atmosphere block heat from escaping. Long-lived gases that remain semi-permanently in the atmosphere and do not respond physically or chemically to changes in temperature are described as "forcing" climate change. Gases, such as water vapor, which respond physically or chemically to changes in temperature are seen as "feedbacks." Gases that contribute to the greenhouse effect include: Water vapor. On Earth, human activities are changing the natural greenhouse. The consequences of changing the natural atmospheric greenhouse are difficult to predict, but certain effects seem likely: On average, Earth will become warmer. The role of human activity Solar irradiance Indeed, studies show that solar variability has played a role in past climate changes.

Climate Impacts in the Southwest | Climate Change Key Points Increasing temperatures and more frequent and severe droughts will likely worsen existing competition for water resources. Drought, wildfire, changes in species' geographic ranges, invasive species, and pests will likely threaten native Southwest forests and ecosystems. View enlarged image Observed and projected temperature change in the Southwest, compared to a 1960-1979 baseline period. The Southwest is bordered by the Pacific Ocean to the west, the Rocky Mountains to the east, and Mexico to the south. There is a wide range of elevation and climate types across the region. The climate of the Southwest is changing. Warming has already contributed to decreases in spring snowpack and Colorado River flows, which are an important source of water for the region. [2] Future warming is projected to produce more severe droughts in the region, with further reductions in water supplies. Top of page Impacts on Water Resources View enlarged image Impacts on Recreation Piñon Pine Die-off [4]

untitled It’s simple, really: As long as we pour CO2; into the atmosphere faster than nature drains it out, the planet warms. And that extra carbon takes a long time to drain out of the tub. A fundamental human flaw, says John Sterman, impedes action on global warming. Sterman is not talking about greed, selfishness, or some other vice. Plants, oceans, and rocks all drain carbon from the atmosphere, but as climatologist David Archer explains in his book The Long Thaw, those drains are slow. Most of Sterman’s students—and his results have been replicated at other universities—didn’t understand that, at least not when the problem was described in the usual climate jargon. Extreme Ice Survey - Extreme Ice Survey Global Warming: Overview and Causes Global Warming, the general increase in the earth's near-surface air and ocean temperatures, remains a pressing issue in a society that has expanded its industrial use since the mid-twentieth century. Greenhouse gases, atmospheric gases that exist to keep our planet warm and prevent warmer air from leaving our planet, are enhanced by industrial processes. As human activity such as the burning of fossil fuels and deforestation increases, greenhouse gases such as Carbon Dioxide are released into the air. Normally, when heat enters the atmosphere, it is through short-wave radiation; a type of radiation that passes smoothly through our atmosphere. As this radiation heats the earth's surface, it escapes the earth in the form of long-wave radiation; a type of radiation that is much more difficult to pass through the atmosphere. Causes of Global Warming Deforestation Another cause of global warming is land-use changes such as deforestation. Effects of Global Warming Melting of the Polar Ice Caps

Tipping Elements - the Achilles Heels of the Earth System — PIK Research Portal Tipping elements are components of the Earth System that are sub-continental in scale and could be tipped into qualitatively different states by small external perturbations. After the transgression of a tipping point, self-reinforcing mechanisms drive the process without further external influences, and a rapid and often irreversible transition to a new state takes place. The environmental impacts are profound and could endanger the livelihoods of millions of people.. Figure: Map of the most important tipping elements in the Earth System overlain on global population density. There are three groups of tipping elements: melting ice bodies, changing circulations of the ocean and atmosphere, and threatened large-scale ecosystems. Click on the bold titles below to access more detailed information on a particular tipping element. Ice Masses When ice, which is light in colour, melts, it exposes a generally darker underlying surface, whether the rocky bed of a glacier or the sea. Ecosystems

Western U.S. Bark Beetles and Climate Change | Climate Change Resource Center (CCRC) Preparer: Barbara Bentz, FWE, Rocky Mountain Research Station, Western Bark Beetle Research Group (WBBRG) This page is an archive, please see our updated Bark Beetles page. Issue Since 1990, native bark beetles have killed millions of trees across millions of hectares of forest from Alaska to southern California. Bark beetle outbreak dynamics are complex, and a variety of circumstances must coincide and thresholds must be surpassed for an outbreak to occur on a large scale. Likely Changes The recent large-scale dieback of piñon (Pinus edulis Engelm.) and ponderosa pine (P. ponderosa Dougl. ex Laws.) and associated bark beetle outbreaks in the Southwestern United States has been linked to the ”climate change type drought” (e.g., dry and warm) that occurred in this region in the early 2000s. We have database models to describe and project the effect of temperature, but not other climate variables, on life-cycle timing of the mountain pine beetle and spruce beetle (D. rufipennis Kirby).

File:Cloudseedingimagerevised.jpg Earth Vision Institute | Earth Vision Institute, Founded by James Balog Sea Temperature Rise -- National Geographic As climate change has warmed the Earth, oceans have responded more slowly than land environments. But scientific research is finding that marine ecosystems can be far more sensitive to even the most modest temperature change. Global warming caused by human activities that emit heat-trapping carbon dioxide has raised the average global temperature by about 1°F (0.6°C) over the past century. In the oceans, this change has only been about 0.18°F (0.1°C). This warming has occurred from the surface to a depth of about 2,300 feet (700 meters), where most marine life thrives. Perhaps the ocean organism most vulnerable to temperature change is coral. Other organisms affected by temperature change include krill, an extremely important link at the base of the food chain. Higher Sea Levels When water heats up, it expands. Stronger Storms These stronger storms can increase damage to human structures when they make landfall. Other Consequences Will It Continue?