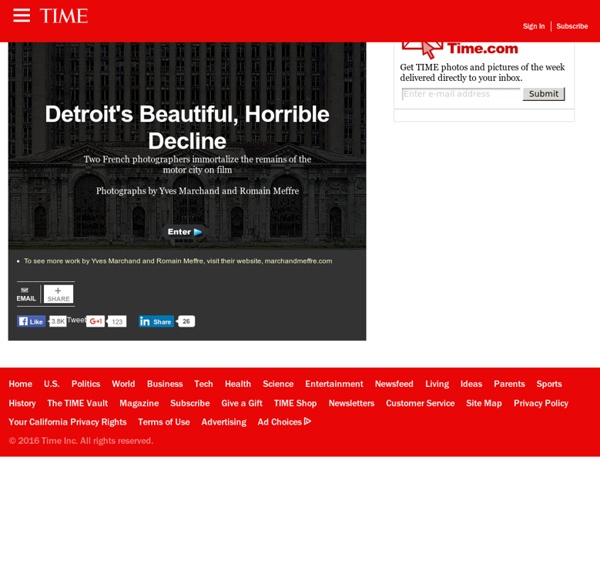 Inside America’s ghost town Play Video Gonzo, Nick and Parv throw out the travel books and backpacker guides and hit the highways of USA to explore some of the country's lesser seen subcultures. Ruin: Welcome to Michigan Central Station. Picture: John Hardwick/Flickr 2009. I AM going to tell you a story about the most inspirational city I have ever been to. The remarkable city in question is Detroit. But I came away totally in love, wanting to be a part of its rebuilding. One of an estimated 80,000 homes abandoned in Detroit. This burnt-out husk of a building was once the home of the Fire Department. This autoroom was once an engine of Detroit’s prosperity. On our journey around the United States we heard about the large capital city, which was once known for its motor vehicle industry but now lies in total ruin. The city has been abandoned by 60 per cent of its population. HOW A CITY WENT BANKRUPT: How it came to this CITY OF RUIN: ‘It was unlike any other city I’d been to before’ Inside a Detroit housing project.

The New Face of Hunger Millions of working Americans don’t know where their next meal is coming from. We sent three photographers to explore hunger in three very different parts of the United States, each giving different faces to the same statistic: of Americans don’t have enough food to eat. Click below to launch galleries Osage, IowaPhotographs by Amy ToensingOn our nation’s richest lands, farmers grow corn and soybeans used to feed livestock, make cooking oil, and produce sweeteners. Yet one in eight Iowans often goes hungry, with children the most vulnerable to food insecurity. Houston, TexasPhotographs by Kitra CahanaDespite a strong economy, Houston is ringed by neighborhoods where many working families can’t afford groceries. Bronx, New YorkPhotographs by Stephanie SinclairUrban neighborhoods with pervasive unemployment and poverty are home to the hungriest. By Tracie McMillan Photographs by Kitra Cahana, Stephanie Sinclair, and Amy Toensing Dreier knows her gambit might backfire, and it does.

Visit the Ghost Towns of Nevada During the 19th century mineral rush that earned Nevada the nickname “the Silver State,” boom towns popped up left and right across the desert. Unfortunately, only a few survived. The rest were abandoned. Houses, schools, saloons, hotels, general stores, and mines were left to deteriorate amidst the tumbleweeds. Fortunately for adventurers, many of these ghost towns have survived into the 21st century, albeit a little worse for wear. Here are six eerily empty ghost towns in Nevada awaiting your exploration. 1 Belmont Like many Nevada ghost towns, Belmont was a silver boom town. Perhaps because of its intense though short-lived success, Belmont’s buildings are surprisingly well preserved. 2 St. St. Today, after rampant water consumption has drastically lowered the level of the lake, the remains of St. 3 Nelson Nelson was once the site of the scandalous Techatticup Mine. 4 Stokes Castle The Stokes reign, however, was short. 5 Unionville Unionville’s story is that of so many boom towns.

Detroit's Beautiful, Horrible Declin 15 Eerily Beautiful Photos of Abandoned Movie Theaters Movies Take a peek inside architectural photographer Matt Lambros's new book, After the Final Curtain: The Fall of the American Movie Theater, which pays tribute to the once-lavish movie palaces of yesteryear. PHOTOGRAPHS BY Matt Lambros // After The Final Curtain For more than 100 years, movie theaters have been the place where people’s Technicolor dreams come true. But as technology has advanced and the age of streaming has engulfed us, many of the world’s most lavish movie palaces have been demolished, repurposed, or outright abandoned. The Brooklyn-based architectural photographer has long had an interest in capturing the haunting beauty of these once-opulent places, which he has captured in a gorgeous new book from Jonglez Publishing, After the Final Curtain: The Fall of the American Movie Theater, which includes photographs and historical information from two dozen theaters across the country. Lambros gave us an exclusive peek at some of the photos, which you can view below. 1of15

Detroit's Beautiful, Horrible Declin 12 Abandoned Movie Sets You Can Actually Visit Although movie productions often film scenes on location, sometimes a real-life location doesn’t offer all of the right places that are called for in the script. So they build it! But taking that set back down isn’t always a top priority. Although the cargo ship, originally named “The Livingston,” was built in 1912 for the East Africa British Railways company, director John Huston spotted the vessel on the Ruki River in the Democratic Republic of Congo and wanted to give it the titular role in his Oscar-winning film, The African Queen. In 2012, Suzanne and Lance Holmquist leased “The African Queen” and completely restored it with a new interior steel-hull frame and replacement boiler, but kept its rustic and worn-out charm. In 1979, Paramount Pictures and Disney co-produced Popeye with Robin Williams as the titular sailor man and Shelley Duvall as his main squeeze Olive Oyl. Stanley Kubrick hated to travel, even if a film’s script dictated it. At the beginning of The Fugitive, Dr.