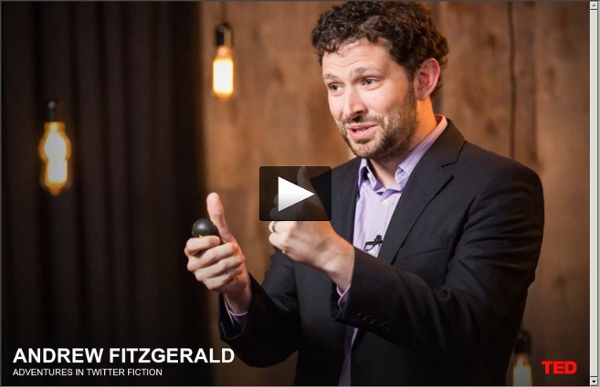 Related:  Twitter in the classroom • Role of Online/Social Media in News • News

Shutdown coverage fails Americans U.S. news reports are largely blaming the government shutdown on the inability of both political parties to come to terms. It is supposedly the result of a "bitterly divided" Congress that "failed to reach agreement" (Washington Post) or "a bitter budget standoff" left unresolved by "rapid-fire back and forth legislative maneuvers" (New York Times). This sort of false equivalence is not just a failure of journalism. It is also a failure of democracy. When the political leadership of this country is incapable of even keeping the government open, a political course correction is in order. But how can democracy self-correct if the public does not understand where the problem lies?

@RealTimeGatsby - Effective use of Twitter for English Class Just today I came across the Twitter account @RealTimeGatsby. Yep, it is exactly what it sounds like – a real time account of the novel The Great Gatsby, only tweeted and not read. Something similar has been done for World War II, which became wildly popular and was incredibly educational. After seeing only a few tweets (at the time of posting this) it seems that @RealTimeGatsby will not disappoint either. See some of their first tweets below:

How the Internet won and abortion rights lost in Texas This afternoon, as the viewers gradually trickled in to the Texas Tribune's YouTube livestream of State Sen. Wendy Davis's attempt at a 13-hour-long filibuster, many people wondered why they'd seen so little news coverage of the event. Commenters noted they'd only heard of Davis's longshot gambit from Facebook and Tumblr, not from their regular news sources. Hours and hours later, "all the major news networks [were] covering a broken cruise ship." But on Twitter, Tumblr, and Facebook, Wendy Davis was all anyone, anywhere, could talk about.

Kimmel Twerking Prank Shows Inanity of TV News Jimmy Kimmel revealed last night that his show was behind the twerking-girl-catches-fire video that recently went viral, and he capped his segment with a montage of all the news and talk shows that had aired and discussed the video. Here, in this one hyperconcentrated minute of tape, can be found just about everything wrong with TV news today. 1. The twerking video, to my America's Funniest Home Videos–trained eye, was clearly a gag. (Why else was the camera shut off so abruptly?) But in presenting it, the anchors have to act like it's a real thing to rationalize it being on a news broadcast (traditionally the home of factual information); they add an obligatory disclaimer of "some are saying it's fake" to show their skeptical bona fides.

50 Ways to Use Twitter in the College Classroom Twitter has caught fire across many professional fields as well as personally, but it seems to be in the beginning stages in the realm of higher education. The creative ways Twitter users have incorporated microblogging has become inspirational, so the recent trend of using Twitter at college, including at online colleges, is sure to keep evolving into an ever more impressive tool. Make sure you don’t get left behind by incorporating some of these educational and fun ways that Twitter can be used in the college classroom. Communication Twitter offers new and exciting ways to open up the lines of communication in the classroom. Find out some of the ways it can work with this list. Findbostonbombers: Reddit vs. the media in search for Boston bombing suspects Photo by Melanie Stetson Freeman/The Christian Science Monitor/Getty Images It’s easy to criticize users of the influential social-news site Reddit for circulating the photos of random innocent bystanders and fingering them as potential suspects in the Boston bombings. I did it myself just yesterday, deriding Redditors for latching onto marathon spectators like “Blue Robe Guy” on the thinnest of circumstantial evidence. So did several other journalists, some of whom went much further in their denunciations. The Atlantic’s Alexis Madrigal was particularly outraged by the findbostonbombers subreddit, calling it “plain, old vigilantism with no place in our society.” Will Oremus is Slate's senior technology writer.

Journalism has become unstuck in time Listen: Billy Pilgrim has become unstuck in time.—Kurt Vonnegut, Slaughterhouse Five For this month’s issue of the Columbia Journalism Review, Jay Rosen has written the kind of incisive, wonderful essay that demands a response. Not the “Hey, you’re wrong!” response, but the “And another thing!” response. 50 Ways to Use Twitter in the Classroom Many critics of Twitter believe that the 140-character microblog offered by the ubiquitous social network can do little for the education industry. They are wrong. K-12 teachers have taken advantage of Twitter’s format to keep their classes engaged and up-to-date on the latest technologies. Google Person Finder Locates Missing at Boston Marathon Explosion Google Person Finder, a tool the company built following the 2010 earthquake in Haiti, has been activated for use following the deadly Boston Marathon explosions Monday afternoon. Shortly after launching, the Person Finder homepage says it's tracking about 800 records. As the tool is being populated, you can either search for someone or share information about someone's whereabouts. The tool includes a disclaimer stating that Google doesn't review or verify any information, and all submitted details are public to all users.

Katie Couric's Move to Yahoo: Desperation or Inspiration? After cycling through all the major networks, except Fox, Katie Couric announced this week she would become the global anchor at Yahoo News. After the surprise wore off, the primary question was: Is this a bold claim on the future or a desperate gamble based on a discredited business model? It appears to be a marriage of convenience. For Couric, 56, who famously tried to resurrect the CBS Evening News, Yahoo is a chance to embrace a new medium. Couric told Capital New York that she won't try to reproduce a half-hour news show online, but instead will use the opportunity to experiment: "What I really am excited about in working with the team at Yahoo is that there are no rules right now, we are going to try things, we are going to see how they go, we are going to see what people are interested in, we can do everything from a town hall meeting to in-depth interviews to a breaking news story." For Yahoo, the hire is part of CEO Marissa Mayer's continuing attempts to recast Yahoo.

Twitter Lesson - Learning English on Twitter Lesson By Kenneth Beare Twitter has exploded across the Internet and more and more English learners are taking advantage of Twitter to practice their English. Learning English on Twitter is ideal for a few reasons: Twitter's 140 character limit ensures that English is practiced in bite-sized bits.Students can discover information about any topic, especially popular culture topics.Students can receive bite-sized tips on English learning via Twitter.

Related:
Related:  Twitter in the classroom   -  Role of Online/Social Media in News   -  News   -  100 Ways to Teach with Twitter   -  Twitter for Learning – 55 Great Articles   -  50 Ways to Use Twitter in the College Classroom - OnlineColleges.net   -  Riddles   -  Pathfinder_OGC   -  dndtools.eu - This website is for sale! - dndtools Resources and Information.   -  The Twitteraholic’s Ultimate Guide to tweets, hashtags, and all things Twitter - The Edublogger   -  pokemondrinking.png (PNG Image, 2216 × 2216 pixels) - Scaled (45%)   -  Twitter in Education – Barriers and possible solutions? | Learning and Innovation   -  A Must Have Guide on Using Twitter in your Classroom ~ Educational Technology and Mobile Learning   -  Using Twitter for Teachers' Professional Development ~ Educational Technology and Mobile Learning   -  10 Infographics for Learning - Getting Smart by Getting Smart Staff - "Are Flashcards an Effective Learning Tool?", "Are We Wired for Mobile Learning?", "Blended Learning: A Disruptive Innovation", "Education 2.0: Social Networking & Education", "How the   -  10 outils pour optimiser son compte Twitter : Faire le ménage dans ses abonnements avec ManageFlitter - JDN Web & Tech   -  The Teacher's Guide To Twitter   -  The Formulists | Formulists finds and analyzes groups of tweeps for you so that you can engage and target them more effectively.   -  twitter-for-teachers.pdf   -  How Teachers Can Stop Being Scared Of Twitter | Edudemic   -  Mrs Lodge's Library -   -  Why the 'Maker Movement' is Popular in Schools   -  The Book Fairy-Goddess   -  A Scientific Guide to Posting Tweets, Facebook Posts, Emails, and Blog Posts at the Best Time - The Buffer Blog   -  5 Ways Twitter Can Help in Education - Getting Smart by Guest Author - edchat, social media, twitter   -  A Teacher’s 3 Twitter Accounts |  IPAD 4 SCHOOLS   -  A Refreshingly Simple Guide To Twitter For Teachers - Edudemic   -  90+ Twitter Tools Teachers Should Know about ~ Educational Technology and Mobile Learning   -  Make It @ Your Library   -  A Copyright-Friendly Toolkit   -  The Beginner's Guide to the Hashtag   -  Flipping the Library: Tips from Three Pros | The Digital Shift 2013   -  5 Excellent Videos to Teach Your Students about Digital Citizenship   -  TweetDeck   -  twbs/bootstrap: The most popular HTML, CSS, and JavaScript framework for developing responsive, mobile first projects on the web.   -  Library Learners - In our elementary school library, we read, wonder, discover, and create!   -  #HashtagBattle   -  Library Patch   -  Home | Quandary   -  Teaching with Twitter: how the social network can contribute to learning | Higher Education Network | The Guardian