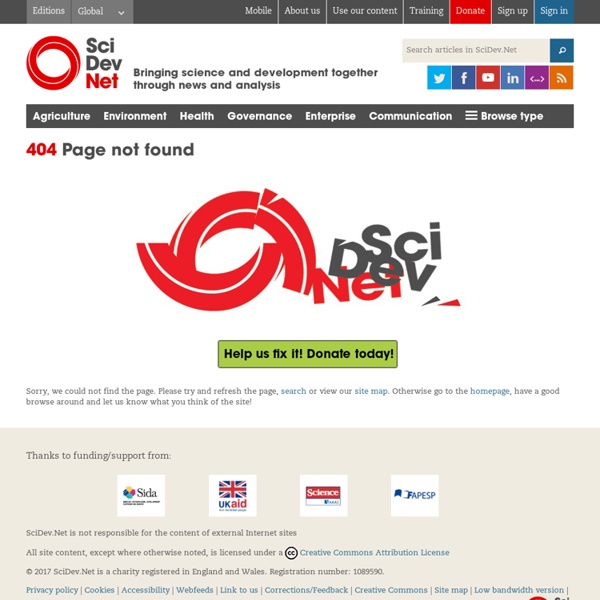 China-Africa joint medical research to deepen [GABORONE, BOTSWANA] China will deepen joint medical research with Africa, particularly in training African medical scientists. Ren Minghui, director-general of the Department for International Cooperation within the National Health and Family Planning Commission of China, said research and development is one priority area of collaboration being explored. "China can support Africa in technical areas of research such as having scientists train in institutions such as the Chinese Center for Disease Control and Prevention, one of the most important institutes in China for research in preventive diseases," he told SciDev.Net at the Fourth International Roundtable on China-Africa Health Cooperation in Botswana, which ended today (7 May). The collaboration aims to boost Africa's research capacityChinese drugs firms are being urged to transfer technologyThe initiative is not driven by commercial interest, says Chinese official

Africa: Watch Out for Child Obesity - Africa's Children Aren't Just Hungry By Muthoni Thang'wa Obesity is on the rise in Africa, according to the World Health Organisation's (WHO) Commission on Ending Childhood Obesity. The number of obese children under 5 years on the continent has doubled in the last 10 years, from around 5 million to 10 million, according to a new report. Mobile set to shake up Africa’s magazine markets Things haven’t been easy for magazines in South Africa, where more titles closed than opened over the past year. But the closures are not necessarily indicative of the health of the sector. It’s a nasty statistic that should give pause for thought – especially considering titles that bit the dust include local editions of international titles Rolling Stone, Oprah Magazine and FHM, all launched a few years back with much fanfare and high hopes. This is the result of a thinning-out of the herd after the rash of new titles that blossomed before tough times and new realities hit the magazine market.

China and Africa hold talks on health development By Judith Ugwumadu | 27 March 2015 Chinese and African health leaders have called for a strengthened partnership to discuss opportunities for universal health care and access to essential medicines. At an international roundtable meeting, held in Beijing this week, Chinese leaders said they had a ‘unique role to play in supporting Africa’s health progress’ because of China’s advances in research and development and its manufacture of low-cost medicines and vaccines. More than 350 health leaders from China and Africa, including government officials, academics and representatives from the private sector and international organisations, attended the meeting.

#MCIA 16: How a vaccine is improving the African child's health As the Ministerial Conference on Immunisation in Africa commences today in Addis Ababa, Ethiopia, vaccine experts and officials representing 26 African countries from the ‘meningitis belt’ celebrate the introduction of MenAfriVac® and its achievements in the continent’s public health system. In five years, MenAfriVac, which is designed, developed and produced for use in Africa, has nearly eliminated serogroup A meningococcal disease from the meningitis belt countries and is now being integrated into routine national immunisation programs. Since the vaccine was first introduced in Burkina Faso back in 2010, the World Health Organisation (WHO) reports that 16 of the 26 countries in the African meningitis belt, between Senegal and Ethiopia, have conducted initial mass vaccination campaigns to protect their citizens.

Naspers is launching a Netflix competitor in the US and Europe AP Photo/Eugene Hoshiko) Africa’s largest media company, Nasper’s, has plans to expand its new video streaming service to North America, Europe, and Asia, according to Bloomberg. The service, called “Showmax,” is a Netflix competitor that will offer not only content from the likes of CBS, the BBC, and Time Warner, but also content produced on the African continent. The $65 billion South African company hopes to attract 15 million subscribers outside of Africa, partially by leveraging a deal with Samsung to include Nasper’s service in its smart TVs, Bloomberg reports. In comparison, Netflix currently has over 60 million subscribers worldwide, and Hulu hit 9 million paid subscribers earlier this year.

Africa: Why a New Vaginal Ring Could Be a Game-Changer in HIV Prevention analysisBy Thesla Palanee-Phillips, University of the Witwatersrand The results of the two studies showing that a vaginal ring can help reduce the risk HIV infection among women is being hailed as an important HIV prevention breakthrough. Launched four years ago, the two clinical trials, known as ASPIRE and The Ring Study, set out to determine how safe and effective the ring was in prevention of HIV infection in women. African Cuisine: The Changing Fortunes of The African Food Label By Ajong Mbapndah L* Meskerem Restaurant on 18th St ,NW Washington serves only ethnic Ethiopian food to a customer base which is 90 percent American. Photo by Ajong Mbapndah L Visitors are greeted with flashy smiles from neatly dressed enthusiastic waiters, and the relaxing music is in sharp contrast to the crazy traffic and challenges getting a parking spot on the busy streets outside.

China promises to build 100 hospitals, clinics in Africa - Footprint to Africa The Chinese government has promised to build 100 hospitals and clinics across Africa in the next three years as part of a plan to improve health systems and preparations for containing future disease outbreaks on the continent. The announcement was made following South African Health Minister Aaron Motsoaledi and his Chinese counterpart Lin Bin’s three-day meeting at the second Ministerial Forum of China-Africa Health Development which has ended in Pretoria. Motsoaledi said the forum, which is a partnership between the Chinese government and those of several African countries, was a major boost to the African continent and would help strengthen the continent’s public health systems during the post-Ebola era. “Learning from the EVD [Ebola Virus Disease] crisis, Chinese and African leaders in the health sectors fully support a new, well-funded, and functional international response system to manage future pandemics,” the South African minister said. Related

Africa: Plea for Treaty On Drug Research By Inga Vesper London — Health activists are demanding an international treaty on medical research and development (R&D) to speed up the creation of cheap medicines. Outdated intellectual property (IP) regimes and market distortions hold back research on new medicines, activists said at a meeting of the UN Secretary-General's High-Level Panel on Access to Medicines, held on 10 March in London, United Kingdom. In Unregulated African Markets, Chinese Drugs Move In On India Photo: securingindustry.com China has captured “the lion’s share” of India’s bulk drugs industry, and now it’s hurting India’s exports markets — especially in African countries where China is dumping cheap product, Indian stakeholders say. Indian pharmaceutical companies have something else to worry about. China is setting up plants in Africa. Once those are established, China will no longer face anti-dumping duty, according to a report in TimesOfIndia.