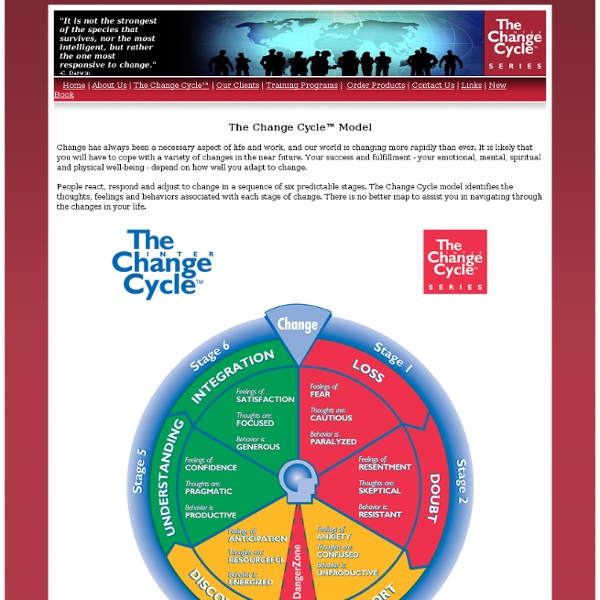 The Change Cycle™ Model Change has always been a necessary aspect of life and work, and our world is changing more rapidly than ever. It is likely that you will have to cope with a variety of changes in the near future. Your success and fulfillment - your emotional, mental, spiritual and physical well-being - depend on how well you adapt to change. People react, respond and adjust to change in a sequence of six predictable stages. Stage 1 – Loss to Safety In Stage 1 you admit to yourself that regardless of whether or not you perceive the change to be good or 'bad" there will be a sense of loss of what "was." Stage 2 – Doubt to Reality In this stage, you doubt the facts, doubt your doubts and struggle to find information about the change that you believe is valid. Stage 3 – Discomfort to Motivation You will recognize Stage 3 by the discomfort it brings. Stage 4 – Discovery to Perspective Stage 4 represents the "light at the end of the tunnel."

Meaninglessness MEANINGLESSNESS and EXISTENTIAL DEPRESSION "It is here that we encounter the central theme of existentialism: to live is to suffer, to survive is to find meaning in the suffering." - Victor Frankl Talk about it: info@livereal.com What's the point? We all get up in the morning, go to bed in the evening, eat, sleep, work, eat, sleep, and work, day after day after day, but . . . What's it all about? The Problem "Imagine a happy group of morons who are engaged in work. "To have a reason to get up in the morning, it is necessary to possess a guiding principle. Your LiveReal Agents are trying to figure it out . . . Many individuals view the issue of "meaninglessness" - asking "what's the point?" However, in the opinion of these illustrious LiveReal Editors, however, reality is just the opposite. It may well be a fact that life, at least at is is usually lived, actually is absurd when seen from a certain perspective. This includes many intelligent and perceptive individuals throughout history.

INTJ Profile Introverted iNtuitive Thinking Judgingby Marina Margaret Heiss Profile: INTJ Revision: 3.1 Date of Revision: 17 Oct 2009 To outsiders, INTJs may appear to project an aura of "definiteness", of self-confidence. This self-confidence, sometimes mistaken for simple arrogance by the less decisive, is actually of a very specific rather than a general nature; its source lies in the specialized knowledge systems that most INTJs start building at an early age. INTJs are perfectionists, with a seemingly endless capacity for improving upon anything that takes their interest. INTJs are known as the "Systems Builders" of the types, perhaps in part because they possess the unusual trait combination of imagination and reliability. In the broadest terms, what INTJs "do" tends to be what they "know". Personal relationships, particularly romantic ones, can be the INTJ's Achilles heel. Functional Analysis by Joe Butt Introverted iNtuition INTJs are idea people. Extraverted Thinking Introverted Feeling U.S.

What motivates us? @Blueluck: Very true - I've seen other countries where people leave their family in another country to go find work, and then to manual labor for extremely cheap just to be able to send it all home to their family. I guess that could be interpreted as their purpose, but the work is not purposeful in and of itself. I guess "pay enough to take money off the table" covers that, so we're only talking about how to motivate people after they're at the comfortable level most Americans that read this blog are at. Interesting results in India, though. I believe there is a threshold that once you're paid a certain amount, you feel on top of things like you deserve it, so you don't work hard to move up further. I think that's one reason government employees aren't known for super service. @Blueluck: Its completely subjective, is the answer.

How to Commit to a Goal Psychological experiments demonstrate the power of a simple technique for committing to goals. Here’s a brief story about why we all sometimes get distracted from the most important goals in our lives. Perhaps you recognise it? You are thinking about changing your job because your boss is a pain and you’re stagnating. As the weeks pass you think about how good it would feel to work for an organisation that really valued you. Work is busy at the moment, the money is OK and your home-life is also packed. Apart from anything else you’ve been thinking about learning a musical instrument. A few months pass. Unfortunately everyday life intervenes again and you do little more than search online for the price of electric pianos. After six months you come back full circle to changing your job, still without having made a real start towards any of these goals. One major reason we don’t achieve our life’s goals is a lack of commitment. Reality check Why mental contrasting is hard Hearts and minds

Are You Living in a Computer Simulation? - StumbleUpon The Ten Most Revealing Psych Experiments Psychology is the study of the human mind and mental processes in relation to human behaviors - human nature. Due to its subject matter, psychology is not considered a 'hard' science, even though psychologists do experiment and publish their findings in respected journals. Some of the experiments psychologists have conducted over the years reveal things about the way we humans think and behave that we might not want to embrace, but which can at least help keep us humble. That's something. 1. The Robbers Cave Experiment is a classic social psychology experiment conducted with two groups of 11-year old boys at a state park in Oklahoma, and demonstrates just how easily an exclusive group identity is adopted and how quickly the group can degenerate into prejudice and antagonism toward outsiders. Researcher Muzafer Sherif actually conducted a series of 3 experiments. 2. The prisoners rebelled on the second day, and the reaction of the guards was swift and brutal. 3. 4. 5. 6. 7. 8. 9. 10.

The Art of Influence Secrets to complaining effectively, motivating loved ones, and getting what you want without being a jerk. Illustrations by Lou Brooks Babies and psychopaths have one thing in common: They're excellent at getting what they want. But for some, grabbing the brass ring is a constant source of stress and confusion. Were it uniformly advantageous to be aggressive, timid, positive, or negative in pursuit of one's goal, evolution would have selected for only such types. Complain to Win —Not to Feel Worse Kvetch, Bitcher, Debbie Downer: No one likes a chronic complainer, and we've got multiple derogatory terms to prove it. Complaining at inappropriate times (when other people are in the spotlight, for example, or when they are focused on issues bigger than yours) can make you look selfish and could further prevent you from being heard. The first step to effective complaining, then, is deciding if you truly want a concrete result or if you just need emotional validation. 6 Persuasive Buzzwords

Become Who You Want To Be Your Music, Your Personality Just as a glimpse inside a bedroom or office provides clues about someone's character, so too can a peek at his music collection. The question "What kind of music do you like?" is so revealing, it is the number one topic of conversation among young adults who are getting to know each other, according to psychologists Jason Rentfrow of the University of Cambridge in the U.K., and Sam Gosling at the University of Texas at Austin. Knowing whether a person prefers John Coltrane to Mariah Carey, or Puccini to Prince allows for remarkably accurate personality predictions, their research has found. What do your tunes say about you? Get Into Their Groove Strangers can accurately assess another person's level of creativity, open-mindedness and extroversion after listening to his or her top 10 favorite songs. Smart Sounds Fans of jazz, classical and other "complex" music typically have above-average IQ scores. Easy Listeners Drama Queens Parental Advisory Boom Town Brain Invasion Peak Performance