The Beginner's Guide to the Hashtag 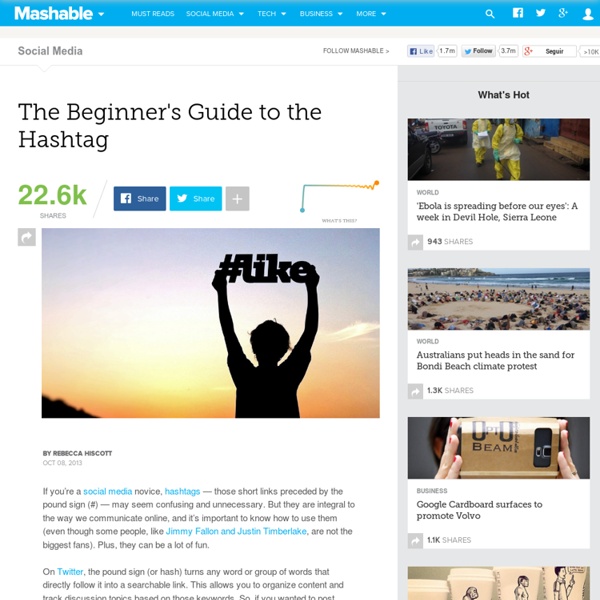 If you’re a social media novice, hashtags — those short links preceded by the pound sign (#) — may seem confusing and unnecessary. But they are integral to the way we communicate online, and it’s important to know how to use them (even though some people, like Jimmy Fallon and Justin Timberlake, are not the biggest fans). Plus, they can be a lot of fun. On Twitter, the pound sign (or hash) turns any word or group of words that directly follow it into a searchable link. The hashtag’s widespread use began with Twitter but has extended to other social media platforms. With our beginner's guide, you'll be hashtagging like a pro in no time. How do you make the most of hashtags? Supported Characters Image: Flickr, Roberta Cortese Which characters can you include in a #hashtag? For starters, spaces are an absolute no-no. Numbers are supported, so tweet about #50ShadesOfGrey to your heart’s content. Keep in mind that the @ symbol does something completely different. Supported Platforms

Twitter Bios and What They Really Say “Wife, mom, lawyer, women & kids advocate, FLOAR, FLOTUS, US Senator, SecState, author,” reads Hillary Clinton’s Twitter bio, before veering off: “dog owner, hair icon, pantsuit aficionado, glass ceiling cracker, TBD ...” Written after she joined the microblogging service in June, those descriptors earned raves. “Hillary Clinton’s Twitter Bio is Perfect,” pronounced a Slate headline. The Washington Post declared that it “may be the best bio ever.” The Twitter bio is a postmodern art form, an opportunity in 160 characters or fewer to cleverly synopsize one’s professional and personal accomplishments, along with a carefully edited non sequitur or two. The standard bio is a staccato string of statuses and interests separated by commas or periods. Then there are the addenda, the hobbies and passions and random facts. The more famous one is, the less the need for straightforwardness. For lesser-known wits, the preferred mode of expression seems to be absurdist subversion. Mr.

The company that powers Google Hangouts wants to radically disrupt all business videoconferencing Video is the new audio. With more emotion, more nuance, and more effective real-time communication, videoconferencing is growing at a 20 percent annual rate in business. But that’s not fast enough for Vidyo, the company that Google tapped for the technology behind Google+ Hangouts. To accelerate growth of the videoconferencing industry — and grab share from market leaders like Cisco and Polycom – Vidyo is employing the traditional web nuclear weapon: free. “We want to transform business-to-business video,” Vidyo senior vice-president Marty Hollander told VentureBeat. In a complicated world that includes everything from six-figure telepresence systems that use dedicated hardlinked network connections to Internet-based services such as Blue Jeans Network (see our recent coverage) to a couple of colleagues hooking up via Skype, Vidyo wanted to build a system for connectivity that everyone can use, said Hollander. Above: Videoconferencing: my screenshot of Vidyo’s feed Image Credit: Flickr

The Complete Guide for Finding and Sharing Better Content on Social Media 3.9K Flares Filament.io 3.9K Flares × Our biggest aim at Buffer is to help you share content on social media in better ways. I wanted to look at ways we can help you with this entire process, from finding the content to sharing it, to analyzing your social media posts. So I’ve uncovered some cool ways to do these things that you might not already know. Why find and share great content? Maybe you’re wondering why we focus so much on discovering and sharing awesome content here at Buffer. 1. If you’re trying to increase the growth of your communities, sharing awesome content is a good way to give them a reason to follow you or visit your page regularly. In this video from Moz CEO Rand Fishkin, he explains how creating content that answers common questions you see time and time again in your community can help you to gain more followers and build a stronger community. 2. As you share more useful, interesting content, your authority within your niche or industry begins to build. 3.

How Online Educators Benefitted by Walking-the-Talk with Collaborative Instructional Design This post examines how instructors teaching online can develop pedagogical and instructional skills by collaborating, communicating and building knowledge online with peers using technological tools and applications. A paper published recently in the Journal of Online Teaching and Learning (JOLT) highlights (perhaps unknowingly) one of the most effective methods for teaching faculty and instructors how to become skilled in online pedagogy and instruction—walking-the-talk. In the paper instructors did exactly what the students need to do to learn effectively and deeply online, by collaborating, contributing knowledge, sharing and creating an artifact [in this case two online courses] virtually. What’s significant is that collaboration and learning occurred via technological applications, i.e. Skype, Google Docs, Dropbox, discussion forums, and Voicethread. References: Like this: Like Loading...

Writing on the Wall | tomstandage.com IN JULY 51BC the Roman statesman and orator Marcus Tullius Cicero arrived in Cilicia, in what is now south-east Turkey, to take up the post of proconsul, or regional governor. Cicero had been deeply reluctant to leave the bustle of Rome, where he was a central figure in the plotting and counter-plotting of Roman politics, and he intended to return as soon as was decently possible. The burning question of the day was whether Julius Caesar, commander of Rome’s armies in the west, would make a grab for power by marching on the city. Cicero had spent his career trying to defend the political system of the Roman republic, with its careful division of powers and strict limits on the authority of any individual, from Caesar and others who wished to centralise power and seize it for themselves. But a new anti-corruption law required Cicero and other trustworthy elder statesmen to take up posts as provincial governors. At the time there were no printing presses and no paper. Like this:

Studio Wikitecture: Opening Architecture | Improving Architecture and City Planning by Harnessing the Ideas behind: Web 2.0, Open Source, Mass Collaboration, Social Networking, Crowd Sourcing, Crowd Wisdom, Social Production, Open Platforms, Open Innovati The Telephone: A Highly Deficient Technology via commons.wikimedia.org When my phone rings, it’s almost always my mom, or her mom, or my partner’s mom. It’s always somebody’s mom. For everyone else, the notification is a buzz, a ding, a quick vibration. This is indicative of a wider trend. And this shift away from traditional telephones and their voice-call functions is, I argue, the result of an inherently flawed medium. Ethnomethodologists and conversation analysts say that the best conversations have a continuous flow, with each speaker picking up just as hir partner leaves off, barely overlapping. Off the bat, the telephone puts interactants at a disadvantage by taking away all but vocal cues. To be clear, I am not advocating a “reduced social cues model” or celebrating face-to-face as the gold standard. The problem with the telephone goes beyond inhibiting the perfect conversation. AOL Instant Messenger: Way better than a phone call