So You Want To Have A Powerful Or Talented Character Who Probably Won't Be Perceived As A Mary Sue? 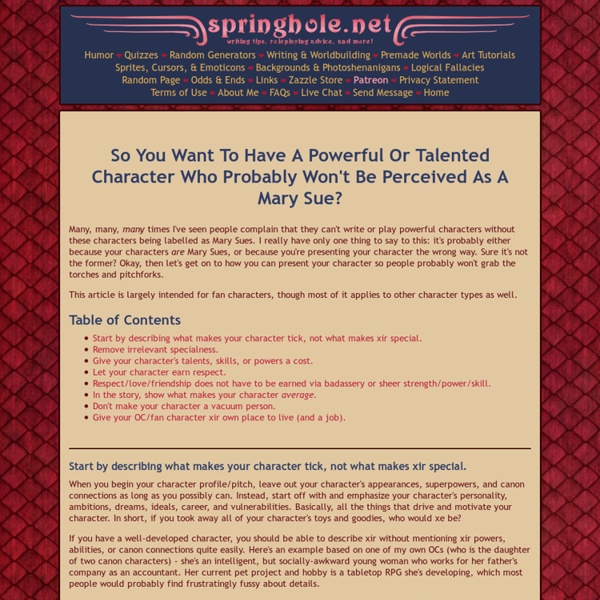 Many, many, many times I've seen people complain that they can't write or play powerful characters without these characters being labelled as Mary Sues. I really have only one thing to say to this: it's probably either because your characters are Mary Sues, or because you're presenting your character the wrong way. Sure it's not the former? Okay, then let's get on to how you can present your character so people probably won't grab the torches and pitchforks. This article is largely intended for fan characters, though most of it applies to other character types as well. Start by describing what makes your character tick, not what makes xir special. When you begin your character profile/pitch, leave out your character's appearances, superpowers, and canon connections as long as you possibly can. If you have a well-developed character, you should be able to describe xir without mentioning xir powers, abilities, or canon connections quite easily. Remove irrelevant specialness.

Things in Speculative Fiction That Would Be Unforgiveably Offensive If Only Everyone Was Human Treating the Character as Subservient Just Because They're Not Human The film version of Eragon contains a scene where Eragon declares, "I'm the rider! I say where we go!" to Saphira, after the latter voices her differing opinions. Put a human woman in Saphira's place (there is no functional difference; Saphira is as intelligent as a human being), make them a married couple, and change Eragon's line to "I'm the husband! I say where we go!"

The Universal Mary Sue Litmus Test Stuck with a case of massive writer's block? Has your muse gone on indefinite hiatus? Or are you just bored? Check out the random generators - with a click of a button, you can create characters, names, settings, items, and more for your creative works! The Universal Mary Sue Litmus Test How to use this test: First, if you're unsure of what a Mary Sue is, please read this page. Common, Yet Terrible Character Descriptors - And How To Fix Them When asked to describe their characters, many people tend to use the same over-generalized descriptors over and over. The result tends to be what I call a "Forer profile" - it's so vague that it can fit any number of characters - all of whom are wildly different - equally well. And when the same character description could fit a sneaky trickster as it could a determined soldier as it could a grad student opening a florist's shop, that's a problem. So, I'm going to outline how to give more and better information on your character to give people a better idea of what sort of person they're reading about. For the sake of simplicity, we'll go with "animals" for most of this particular section.

How to Write a Synopsis of Your Novel by Glen C. Strathy* To sell your novel, you may need to know how to write a synopsis, even if you are a pantser-type novelist who can write a whole novel without making an outline first. Agents and publishers will often ask for a synopsis along with sample chapters before they request a complete manuscript. Fantasy Fiction Factor - Creating Believable Magic Creating Believable Magic by Tina Morgan What sets fantasy apart from other genres? It can use the same setting as a modern day mystery or a historical romance so why isn't it either of these things? First, the tone or emphasis of a fantasy story isn't on romance or mystery though it can contain strong elements of both. The majority of fantasy works are going to contain some element of magic, be it inherent to the setting or the characters or something that can be manipulated. The first step in deciding how to add magic to your world is who or what will have or use it.

How to Write a Horror Story: 12 steps Steps Writing Your Own Horror Story 1Get an idea, brainstorm ( make a list of scary topics; be original). Basic Tips To Create Better Characters With Tragic & Traumatic Backstories First, ask yourself why you’re giving your character a tragic or traumatic backstory. Are you giving your character this backstory to build up/explain what kind of person your character is now? Or are you simply doing it to make readers or other characters feel sorry for your character, or to make your character seem more badass/tough for having survived the ordeal? The first is a legitimate reason to give your character a tragic/traumatic backstory. Writing Tips - Publishers list of phrases for writers to avoid We have all met people who have the extraordinary ability to talk in clichés: Y’know, not to beat around the bush or hedge your bet, this section is a must-read because it calls a spade a spade and in a nutshell leaves no stone unturned to pull the rug from under those off-the-cuff, old-hat bête noires called clichés. These are the people who’ve given the cliché its bad name. We all tend to use them, of course. Sometimes that familiar phrase is the neatest way of expressing yourself and most of us can, in a flash (cliché), unconsciously call up a few hundred of them to help us out in writing and conversation.

Fantasy Holly Lisle's Vision By Jim Francis ©2001, Jim Francis One of the fun things about magic stories is, well, the fun.