Michael Sandel: Why we shouldn't trust markets with our civic life 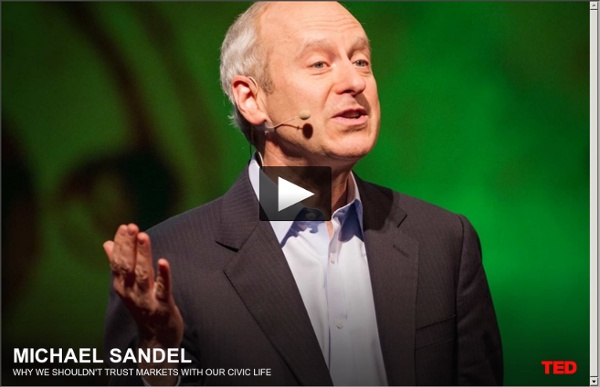 Those People There’s a food drive happening at the school where I work. Several bins have been set up throughout the hallways, with cute kid-decorated signs that implore us to SCARE HUNGER and donate non-perishables for the local food shelf. As I am wont to do, I look at the food as I walk by. Why? Because I like food. Dang. Like I was doing earlier this week. As she was saying this, another woman happened by. “Too bad they won’t know what to do with most of it.” It was one of those moments in life, when your ears hear something but your brain can’t quite process it. I spoke up, while she was still within earshot. The woman stopped. “Those people won’t know what most of that is. Yep. Those people. The last time I got groceries at our local food shelf was this past February. I can still remember the first time I visited the food shelf. Once you get past the hardest part, which is walking through the door, being at the food shelf isn’t so bad. I wanted to say that, but I didn’t. “I like quinoa.”

The Mental Burden of a Lower-Class Background For the last week of December, we’re re-posting some of our favorite posts from 2011. Originally cross-posted at Jezebel and Owni. A few years ago my mom took a short-term nursing job at a hospital in the Sacramento area. This was a huge deal for her. She had never been to California, hadn’t lived outside of our rural area of Oklahoma since she divorced my dad when I was a baby, and had never worked at a “big city” hospital. And then, a few days before she was set to leave, she called me. Of course they did, and were. I lied to her. I thought of that experience when I saw this postcard from Post Secret: I’ve built up a lot more cultural capital than my mom, going to grad school and being socialized into the norms of academia.

A New Workplace Manifesto: In Praise Of Freedom, Time, Space, And Working Remotely The conventional idea of luxury is the antithesis of work. Sure, the gilded few are awarded trinkets to soothe their working experience, perhaps with a swanky corner office, a plush company-provided Lexus or--if they're wearing a T-shirt rather than a suit to work--with free gourmet lunches and ping-pong tables. (Or not, as the case may be.) But even for those with the grandest of paychecks and superfluous perks, work is still in direct opposition to luxury. The vast majority of workers across the world still commute in some form. It's not exactly news that long commutes are brutal, but the science behind just how brutal is mounting, and it all points to the same conclusion: Commuting is a recipe for misery, associated with an increased risk for obesity, insomnia, stress, neck and back pain, high blood pressure and other stress-related ills like heart attacks and depression, and even divorce. Of course, that seems like the antithesis of luxury! The fact is that most people like to work.

Hyperemployment, or the Exhausting Work of the Technology User - Ian Bogost In 1930, the economist John Maynard Keynes famously argued that by the time a century had passed, developed societies would be able to replace work with leisure thanks to widespread wealth and surplus. “We shall do more things for ourselves than is usual with the rich to-day,” he wrote, “only too glad to have small duties and tasks and routines.” Eighty years hence, it’s hard to find a moment in the day not filled with a duty or task or routine. Take email. Now, email is a pot constantly boiling over. If you’re like many people, you’ve started using your smartphone as an alarm clock. Email and online services have provided a way for employees to outsource work to one another. No matter what job you have, you probably have countless other jobs as well. And email has become the circulatory system along which internal outsourcing flows. The despair of email has long left the workplace. Increasingly, online life in general feels like this. Today, everyone’s a hustler.

Rich People Actually Don't Create The Jobs As America struggles with high unemployment and record inequality, everyone is offering competing solutions to the problem. In this war of words (and classes), one thing has been repeated so often that many people now regard it as fact. "Rich people create the jobs." Specifically, by starting and directing America's companies, entrepreneurs and rich investors create the jobs that sustain everyone else. This statement is usually invoked to justify cutting taxes on entrepreneurs and investors. This argument ignores the fact that taxes on entrepreneurs and investors are already historically low, even after this year's modest increases. But, more importantly, this argument perpetuates a myth that some well-off Americans use to justify today's record inequality — the idea that rich people create the jobs. Entrepreneurs and investors like me actually don't create the jobs -- not sustainable ones, anyway. Yes, we can create jobs temporarily, by starting companies and funding losses for a while.

Declining Faith in Hard Work and Capitalism by Martin Hart-Landsberg, PhD, Aug 1, 2012, at 11:35 am Cross-posted at Reports from the Economic Front. The Pew Research Center recently published a report titled “Pervasive Gloom About the World Economy.” The following two charts come from Chapter 4 which is called “The Causalities: Faith in Hard Work and Capitalism.” The first suggests that the belief that hard work pays off remains strong in only a few countries: Pakistan (81%), the U.S. (77%), Tunisia (73%), Brazil (69%), India (67%) and Mexico (65%). The low scores in China, Germany, and Japan are worth noting. The second chart highlights the fact that growing numbers of people are losing faith in free market capitalism. GlobeScan polled more than 12,000 adults across 23 countries about their attitudes towards economic inequality and, as the chart below reveals, the results were remarkably similar to those highlighted above. Martin Hart-Landsberg is a professor of economics at Lewis and Clark College.

Bounded rationality Bounded rationality is the idea that in decision-making, rationality of individuals is limited by the information they have, the cognitive limitations of their minds, and the finite amount of time they have to make a decision. It was proposed by Herbert A. Simon as an alternative basis for the mathematical modeling of decision making, as used in economics, political science and related disciplines; it complements rationality as optimization, which views decision-making as a fully rational process of finding an optimal choice given the information available.[1] Another way to look at bounded rationality is that, because decision-makers lack the ability and resources to arrive at the optimal solution, they instead apply their rationality only after having greatly simplified the choices available. Some models of human behavior in the social sciences assume that humans can be reasonably approximated or described as "rational" entities (see for example rational choice theory). Origins[edit]

Cognitive bias Systematic pattern of deviation from norm or rationality in judgment Although it may seem like such misperceptions would be aberrations, biases can help humans find commonalities and shortcuts to assist in the navigation of common situations in life.[5] Some cognitive biases are presumably adaptive. Cognitive biases may lead to more effective actions in a given context.[6] Furthermore, allowing cognitive biases enables faster decisions which can be desirable when timeliness is more valuable than accuracy, as illustrated in heuristics.[7] Other cognitive biases are a "by-product" of human processing limitations,[1] resulting from a lack of appropriate mental mechanisms (bounded rationality), impact of individual's constitution and biological state (see embodied cognition), or simply from a limited capacity for information processing.[8][9] Overview[edit] The "Linda Problem" illustrates the representativeness heuristic (Tversky & Kahneman, 1983[14]). Types[edit] List of biases[edit]

Encore: Taming Capitalism Run Wild BILL MOYERS: This week on Moyers & Company… RICHARD WOLFF: Our system capitalism, which we finally have to debate now that it’s so dysfunctional. Our system isn’t working. It isn’t producing for the mass of people. ANNOUNCER: Funding is provided by: Carnegie Corporation of New York, celebrating 100 years of philanthropy, and committed to doing real and permanent good in the world. The Kohlberg Foundation. Independent Production Fund, with support from The Partridge Foundation, a John and Polly Guth Charitable Fund. The Clements Foundation. Park Foundation, dedicated to heightening public awareness of critical issues. The Herb Alpert Foundation, supporting organizations whose mission is to promote compassion and creativity in our society. The Bernard and Audre Rapoport Foundation. The John D. Anne Gumowitz. The Betsy And Jesse Fink Foundation. The HKH Foundation. Barbara G. And by our sole corporate sponsor, Mutual of America, designing customized individual and group retirement products.

THE ECONOMY: Time For Companies To Pay Their Employees More Companies Need To Pay People More Digital Dead End: Fighting for Social Justice in the Information Age by Virginia Eubanks Criticism of capitalism Criticism of capitalism ranges from expressing disagreement with the principles of capitalism in its entirety, to expressing disagreement with particular outcomes of capitalism. Among those wishing to replace capitalism with a different method of production and social organization, a distinction can be made between those believing that capitalism can only be overcome through revolution (e.g., revolutionary socialism) and those believing that structural change can come slowly through political reforms (e.g., social democracy). Some critics believe there are merits in capitalism, and wish to balance it with some form of social control, typically through government regulation (e.g., the social market movement). Issues[edit] "Capitalism is the astounding belief that the most wickedest of men will do the most wickedest of things for the greatest good of everyone." Democracy and freedoms[edit] David Schweickart wrote that, in capitalist societies, United States President Dwight D.