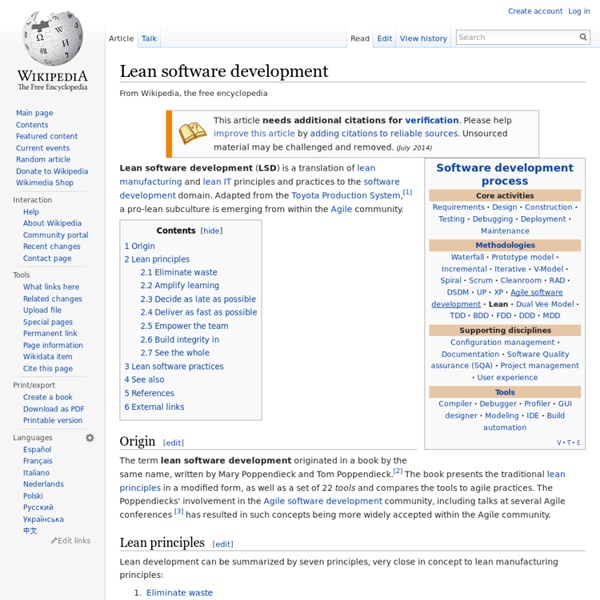 Kanban This article is about the process management and improvement method. For the lean manufacturing process, see Kanban. Kanban in the context of software development can mean a visual process management system that tells what to produce, when to produce it, and how much to produce inspired by the Toyota Production System[1] and Lean manufacturing.[2] The name 'Kanban' originates from Japanese[看板], and translates roughly as "signboard" or "billboard". Start with existing process The Kanban method does not prescribe a specific set of roles or process steps. Agree to pursue incremental, evolutionary change The organization (or team) must agree that continuous, incremental and evolutionary change is the way to make system improvements and make them stick. Respect the current process, roles, responsibilities and titles It is likely that the organization currently has some elements that work acceptably and are worth preserving. Leadership at all levels 1. You cannot improve what you cannot see. 2.

Scrum (software development) Agile software development framework Approaches to coordinating the work of multiple scrum teams in larger organizations include large-scale scrum (LeSS), scaled agile framework (SAFe), scrum of scrums, and Scrum@Scale, the Nexus, among others. Many of the terms used in Scrum are typically written with leading capitals (e.g., Scrum Master, Daily Scrum). However, to maintain an encyclopedic tone, this article uses normal sentence case for these terms (e.g., scrum master, daily scrum) — unless they are recognized marks (such as Certified Scrum Master). Organize further meetings to demonstrate the solution to key stakeholders who were not present at a sprint review.Define and announce releases.Communicate delivery and team status.Share progress during governance meetings.Share RAID (Risks, Assumptions, Issues and Dependencies) with stakeholders.Negotiate priorities, scope, funding, and schedule.Ensure that the product backlog is visible, transparent and clear. At the sprint review, the team:

Integration Developer News: Architecting the Intelligent Enterprise with SOA, BPM, Enterprise Architecture and Cloud Computing Agile software development Agile software development is a set of principles for software development in which requirements and solutions evolve through collaboration between self-organizing,[1] cross-functional teams. It promotes adaptive planning, evolutionary development, early delivery, and continuous improvement, and it encourages rapid and flexible response to change.[2] Agile itself has never defined any specific methods to achieve this, but many have grown up as a result and have been recognized as being 'Agile'. The Manifesto for Agile Software Development,[3] also known as the Agile Manifesto, was first proclaimed in 2001, after "agile methodology" was originally introduced in the late 1980s and early 1990s. The manifesto came out of the DSDM Consortium in 1994, although its roots go back to the mid 1980s at DuPont and texts by James Martin[4] and James Kerr et al.[5] History[edit] Incremental software development methods trace back to 1957.[6] In 1974, E. The Agile Manifesto[edit] Agile principles[edit]

Kanban (development) This article is about the process management and improvement method. For the lean manufacturing process, see Kanban. Kanban is a method for managing knowledge work with an emphasis on just-in-time delivery while not overloading the team members. In this approach, the process, from definition of a task to its delivery to the customer, is displayed for participants to see. Kanban in the context of software development can mean a visual process-management system that tells what to produce, when to produce it, and how much to produce - inspired by the Toyota Production System[1] and by Lean manufacturing.[2] The name 'Kanban' originates from Japanese[看板], and translates roughly as "signboard" or "billboard". Kanban is rooted in four basic principles: Start with existing process The Kanban method does not prescribe a specific set of roles or process steps. Agree to pursue incremental, evolutionary change Respect the current process, roles, responsibilities and titles Leadership at all levels

Scrum (development) Scrum is an iterative and incremental agile software development framework for managing product development. It defines "a flexible, holistic product development strategy where a development team works as a unit to reach a common goal", challenges assumptions of the "traditional, sequential approach" to product development, and enables teams to self-organize by encouraging physical co-location or close online collaboration of all team members, as well as daily face-to-face communication among all team members and disciplines in the project. A key principle of Scrum is its recognition that during a project the customers can change their minds about what they want and need (often called "requirements churn"), and that unpredicted challenges cannot be easily addressed in a traditional predictive or planned manner. Later, Schwaber with others founded the Scrum Alliance and created the Certified Scrum Master programs and its derivatives. Each sprint is started by a planning meeting.

Matrix management Strictly speaking, matrix management is the practice of managing individuals with more than one reporting line (in a matrix organization structure), but it is also commonly used to describe managing cross functional, cross business group and other forms of working that cross the traditional vertical business units – often silos - of function and geography. What is it?[edit] It is a type of organizational structure in which people with similar skills are pooled for work assignments, resulting in more than one manager (sometimes referred to as solid line and dotted line reports, in reference to traditional business organization charts). For example, all engineers may be in one engineering department and report to an engineering manager, but these same engineers may be assigned to different projects and report to a different engineering manager or a project manager while working on that project. The matrix for project management[edit] Management advantages and disadvantages[edit] R.

Extreme programming Planning and feedback loops in extreme programming. Extreme programming (XP) is a software development methodology which is intended to improve software quality and responsiveness to changing customer requirements. As a type of agile software development,[1][2][3] it advocates frequent "releases" in short development cycles, which is intended to improve productivity and introduce checkpoints at which new customer requirements can be adopted. Critics have noted several potential drawbacks,[5] including problems with unstable requirements, no documented compromises of user conflicts, and a lack of an overall design specification or document. History[edit] Although extreme programming itself is relatively new, many of its practices have been around for some time; the methodology, after all, takes "best practices" to extreme levels. Origins[edit] The first time I was asked to lead a team, I asked them to do a little bit of the things I thought were sensible, like testing and reviews.

Lean integration Lean integration is a management system that emphasizes creating value for customers, continuous improvement, and eliminating waste as a sustainable data integration and system integration practice. Lean integration has parallels with other lean disciplines such as lean manufacturing, lean IT, and lean software development. It is a specialized collection of tools and techniques that address the unique challenges associated with seamlessly combining information and processes from systems that were independently developed, are based on incompatible data models, and remain independently managed, to achieve a cohesive holistic operation. History[edit] Lean integration was first introduced by John Schmidt in a series of blog articles starting in January 2009 entitled 10 Weeks To Lean Integration.[1] This was followed by a white paper[2] on the topic in April 2009 and the book Lean Integration, An Integration Factory Approach to Business Agility [3] in May 2010. Overview[edit] See also[edit]