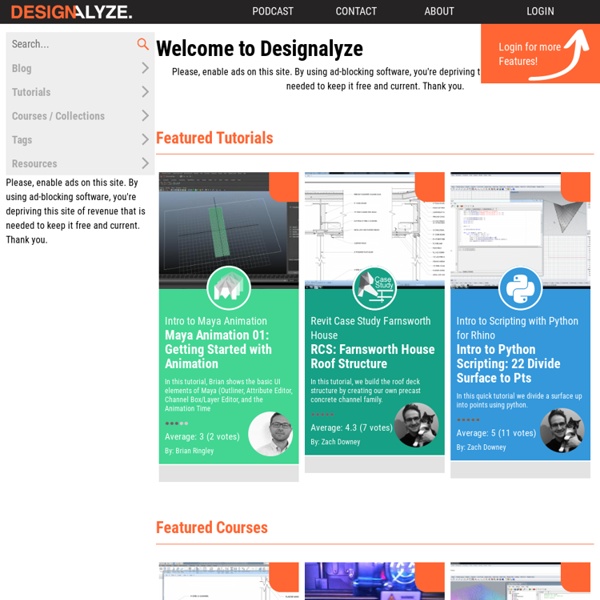 Perfect buildings: the maths of modern architecture March 2007 Architecture has in the past done great things for geometry. Together with the need to measure the land they lived on, it was people's need to build their buildings that caused them to first investigate the theory of form and shape. The London City Hall on the river Thames. Foster + Partners is an internationally renowned studio for architecture led by Norman Foster and a group of senior partners. Many of Foster + Partners' projects have one thing in common: they are huge. The Specialist Modelling Group The Foster + Partners Specialist Modelling Group (SMG), of which De Kestelier and Peters are members, was set up in 1997. Mathematical surfaces populated with panels. With the help of computers you can model pretty much every aspect of a building, from its physics to its appearance. An architect's model of 30 St Mary Axe. Parametric modelling has been around since the 1960s, but only now are architects fully exploiting its power. Parametric models do all this for you. Polymaths

Tutorials Introduction to Grasshopper Videos by David Rutten. Wondering how to get started with Grasshopper? Look no further. Spend an some time with the creator of Grasshopper, David Rutten, to learn the fundamental of Grasshopper. Dario Donato director di SpatialConnection(s), incubatore di ricerca per una creatività matematica, ha il piacere di annunciare il libro: Contaminazioni creative digitali – Trascrizioni di una complessità algoritmica attraverso Rhino.Grasshopper Transcripts of a complexity algorithmic through Rhino and Grasshopper. If you’re looking for a nice collection of Grasshopper tutorials then jump over to Designalyze Here are a series of beginner and advanced tutorials from our friends at Studio Mode... This tutorial series was developed for the Design Studio AIR at the University of Melbourne, Faculty of Architecture, Building and Planning. Versione italiana del tutorial Essential Mathematics, tradotta da Nando Varriale Essential Mathematics 2nd Edition in Korean

BeginnersGuide/Programmers This is a Wiki page. Users with edit rights can edit it. You are therefore free to (in fact, encouraged to) add details of material that other Python users will find useful. A beginner-friendly Python tutorial that starts with the absolute basics, but also covers more advanced stuff like Python software deployment. Mediated Matter Neri Oxman and Steven Keating Functionally graded materials–materials with spatially varying composition or microstructure–are omnipresent in nature. From palm trees with radial density gradients, to the spongy trabeculae structure of bone, to the hardness gradient found in many types of beaks, graded materials offer material and structural efficiency. RHINO: GRASSHOPPER DEFINITIONS - RHINO / GH This definition was developed for my final thesis project to generate a louver system based on functional requirements within the building. The performance was then tested in Ecotect. A large part of my thesis design involved invertible arena seating with many moving parts. I used Grasshopper as a means to develop the seating testing clearances, site lines, and many other variables. This definition looks at taking any curved surface, and generating weaving geometry across it. The parametric skyscraper uses Grasshopper to generate the entire structure. My favorite definition to date, this definition generates box designs based on real boxes I crafted in the wood shop while in Grad school This definition extrudes geometry based on their proximity to a polyline attractor. Using a definition created by paramod, I wanted to see if I could edit the definition so that different panels could be combined to create a seamless surface This was one of the first definitions from scratch I ever created.

Rhino Python Tutorials – Plethora Project Plethora-Project.com is an initiative to accelerate computational literacy in the frame of architecture and design. It aligns with the "show me your screens" motto of the TopLap live-coding group attempting to get rid of Obscurantism in digital design. Directed by Jose Sanchez Contact me at : jomasan@gmail.com Bio: Jose Sanchez is an Architect / Programmer / Game Designer based in Los Angeles, California. He is partner at Bloom Games, start-up built upon the BLOOM project, winner of the WONDER SERIES hosted by the City of London for the London 2012 Olympics. He is the director of the Plethora Project (www.plethora-project.com), a research and learning project investing in the future of on-line open-source knowledge.

Before they made it, they broke the mold. Pleated Shell Structures 1 – Part 1 of 2. Part 2, an interview with designer Shajay Bhooshan, will post on Thursday, Dec 6. The Pleated Shell Structures recently exhibited at SCIArc (Southern California Institute of Architecture) are a pair of free-standing, canopy-like structures made primarily of FRP. They are the product of an experiment in fabric-forming of FRP instead of using hard molds, a method that uses the stretching properties of fabrics to define a minimal surface meeting certain boundary conditions. Forms were fabricated and cast at Kreysler & Associates in American Canyon, CA, north of San Francisco, and the project was assembled onsite at SCIArc in Los Angeles, all in just 8 days. The importance of the project is its exploration of shapes defined by edge conditions, and their translation into an alternative method for forming FRP. The method under exploration is to make frames, composed of flat pieces of plywood, whose curvilinear edges have fabric stretched over them.