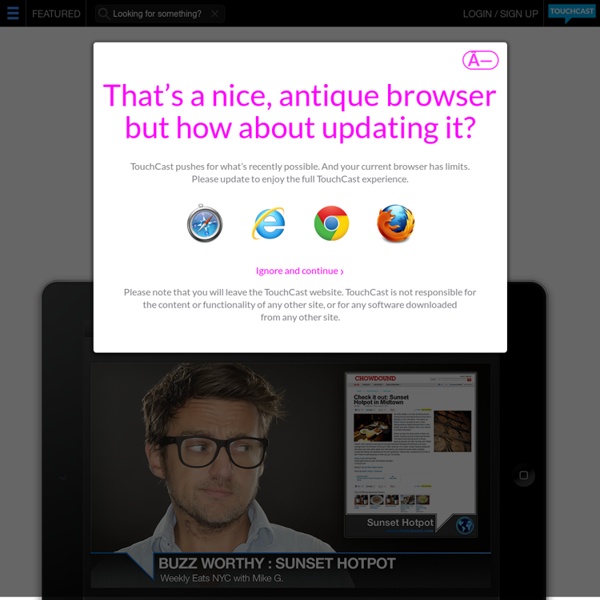 Zaption - Interact & Learn with Video Lessons ShowMe - The Online Learning Community emaze - Amazing Presentations in Minutes - 10 Sites for Educational Documentaries 0 Comments October 18, 2012 By: David Kapuler Oct 18 Written by: 10/18/2012 3:46 PM ShareThis Documentaries are used in education all the time to educate and inform students about different nonfiction topics. Chockadoc - A nice site for finding documentaries with an educational category where people can rate videos as well. David Kapuler is an educational consultant with more than 10 years of experience working in the K-12 environment. Alert to All Users of the Disqus commenting system: Because of a recent global security issue, the Disqus website recommends that all users change their Disqus passwords.

5 Ways to View PowerPoint Presentation on iPad Have a pile of PowerPoint presentation files and wanna view them on your new iPad? Though playing PowerPoint presentation on iPad is wanted for most iPad users, Apple doesn't have a plan to develop any tool for it. The good news is that with some wordarounds, you can view PowerPoint on iPad freely. Below 5 ways are introduced for you to play PPT on iPad. 1. iPad is a superior platform for reading PDF files. 1. 2. 3. After you successfully convert PPT to PDF, transfer the newly PDF to iPad for reading on the go. 2. Since iPad is equipped with a photo viewer, then converting your PowerPoint slideshow to pictures is a good way to view it on iPad. iPad supported image formats are .jpg, .bmp, .gif, and .png. 2. 3. 4. And then the PowerPoint should be exported as images. 3. Nothing is more pleasant than watching videos on iPad. I like this “loseless” way that help me view the video presentation on my iPad. 4. 5.

Next Vista for Learning Invitations, Collages, Slideshows and Scrapbooks – Smilebox HelloSlide - Bring your slides to life ToonDoo - World's fastest way to create cartoons! GoAnimate. History for Kids: Aztecs, Maya, and Inca Back to History The three most dominant and advanced civilizations that developed in the Americas prior to the arrival of the Europeans were the Aztecs, the Maya, and the Inca. Map of Aztec, Mayan, and Incan Civilizations by Ducksters Aztecs The Aztec Empire was located in central Mexico. It ruled much of the region from the 1400s until the Spanish arrived in 1519. The capital city of the Aztec Empire was Tenochtitlan. The Aztec called their ruler the Tlatoani. Maya The Maya civilization began as early as 2000 BC and continued to have a strong presence in Mesoamerica for over 3000 years until the Spanish arrived in 1519 AD. The Maya were located in Central America in a region that is today made up of southern Mexico, the Yucatan Peninsula, Guatemala, Belize, and northern El Salvador. The Maya were the only American civilization to develop an advanced written language. Inca The emperor of the Inca was known as the Sapa Inca. ActivitiesCrossword PuzzleWord Search

HISTORY OF THE INCAS Cuzco and the Incas: 15th century In the early 15th century the town of Cuzco is a small place, the headquarters of one of many competing tribes within the region which was once ruled from Tiwanaku. But in about 1438 a younger son of the ruler defeats the neighbouring Chanca people, usurps power, gives himself the resounding title Pachacuti ('transformer of the earth') and begins an astonishing process of military expansion. The policy is continued by his son, Topa Inca (also sometimes called Tupac Inca). By the end of two long reigns (about fifty-five years in all) the Cuzco dynasty, known as the Incas, are in loose control of an empire stretching from Quito in modern Ecuador to the Maule river in Chile - a distance of nearly 2500 miles. Even allowing for the exaggerations of oral history transmitted within a ruling dynasty, this is a remarkable achievement. The Inca expansion also shares some features with Genghis Khan's programme of conquest. Inca roads: 15th century

Incas - HowStuffWorks Incas, an Indian people of South America. Long before the voyages of Columbus, their empire, centered in Peru, was remarkable for its organization and culture. The word Inca, properly the title of the emperors, was eventually applied to the people as a whole. Their descendants, the Quechua Indians, now make up most of the rural population of Ecuador, Peru, Bolivia, and parts of Argentina. The Inca Empire stretched 3,000 miles along the coast of South America. At its height the Inca empire stretched for some 3,000 miles (4,800 km) from present-day Colombia along the Pacific coast through Ecuador, Peru, and Bolivia into Chile. How the Incas Lived The Incas worshiped the sun god, Inti.His chief temple, the Temple of the Sun, was radiant with the immense amount of gold, silver, and jewels used to decorate it. The Inca emperor, believed to be descended directly from the sun god, had absolute power. Inca emperors were treated as earthly gods. The Incas spoke the Quechua language. History