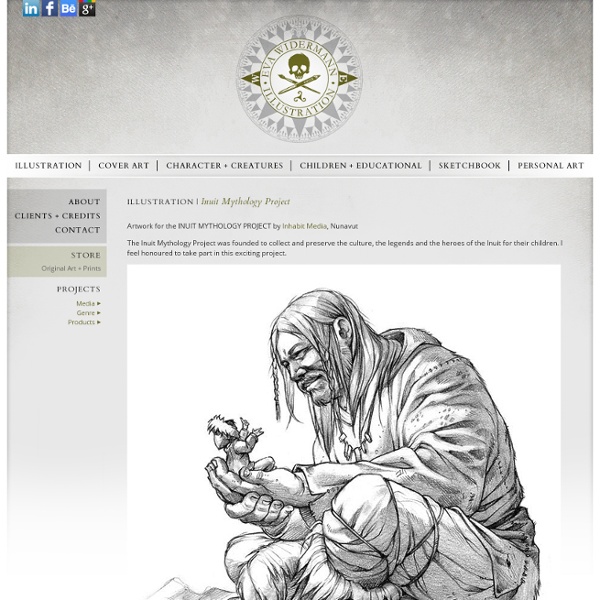 Artwork for the INUIT MYTHOLOGY PROJECT by Inhabit Media, Nunavut The Inuit Mythology Project was founded to collect and preserve the culture, the legends and the heroes of the Inuit for their children. I feel honoured to take part in this exciting project. All images © by Inhabit Media Related:  Graphic Design

How to create a sunken trampoline - little green fingers I think a sunken trampoline has to be my favourite family garden feature. It's a simple enough idea but solves so many headaches. It's safer, less intrusive and popular with everyone. I have sunken a couple myself. Well, to be more accurate, I've sunken the same one twice (note to self - decide where to put the thing and don't change your mind after 12 months). And I have also designed several gardens with sunken trampolines, so I now consider myself, if not an expert, certainly au fait with the ups and downs (no pun intended). So what do you do...? First, measure up - I would say buy a relatively large trampoline (ours is 14') but make sure that it won't dominate the garden. And that's it, except to say, sunken trampolines might be safer, but not so safe that you shouldn't supervise very carefully. Oh and if you want to see a couple of films about putting in sunken trampoines and how to maintain them, check these out below:

Russ Mills Artist Brian Dettmer Carves Old Books into Intricate Narrative Sculptures Brian Dettmer - Gallery Page 2 Most of Dettmer’s focus is on books, favoring out of date encyclopedias, medical journals, illustration books and dictionaries. He begins carving away arbitrarily at the pages, letting the images reveal themselves as he moves through his process. He seals the edges of the books to ensure precision, which also transforms the splayed edges to look like a smooth and sanded piece of wood. Carefully extracting bits and pieces, he creates a narrative within the books’ contents, revealing selected sentences and images. The resulting beautiful sculptures completely reinterpret the original intention of each book. Dettmer’s messages range from narrative to political, with spiral sculptures of butterflies from a lepidoptery journal, or a scene of layered illustrated animals from a children’s book. Dettmer exhibits his sculptures in galleries and museums throughout North America and Europe, breathing new life into media that our fast-paced society has outgrown. + Brian Dettmer

The Psychology of Color [Infographic] | Louisville Painters Download the infographic as a PDF Embed this image on your site: L'ACTE GRATUIT Wojciech Papaj aka @drpajchiwo is 46 years-old teacher from Nowy Sacz in Poland. He discovered mobile photography relatively recently, only three years ago. Equipped with Lumia 830, takes pictures and edits them using mobile applications - it is convenient and saves time. Since 2013 is a proud member of the first Polish group of enthusiasts of mobile photography - Grupa Mobilni.

Sagaki Keita (click images for detail) Artist Sagaki Keita was born in 1984 and lives and works in Tokyo. His densely composited pen and ink illustrations contain thousands of whimsical characters that are drawn almost completely improvised. I am dumbstruck looking at these and love the wacky juxtaposition of fine art and notebook doodles. See more of his work here, and be sure to click the images above for more detail. Thanks Sagaki for sharing your work with Colossal! Underground cathedral (Wieliczka Salt Mines) Europe is generally agreed to be the birthplace of western culture, including such legendary innovations as the democratic nation-state, football and tomato sauce. The word Europe comes from the Greek goddess Europa, who was kidnapped by Zeus and plunked down on the island of Crete. Europa gradually changed from referring to mainland Greece until it extended finally to include Norway and Russia. Don't be confused that Europe is called a continent without looking like an island, the way the other continents do. It's okay. Europe is presently uniting into one political and economic zone with a common currency called the Euro. Do not confuse the EU with the Council of Europe, which has 47 member states and dates to 1949. In spite of these two bodies, there is still no single Constitution or set of laws applying to all the countries of Europe. Text by Steve Smith.

Graphic Art News | Graphic Design Inspiration Ceramic artworks by Eva Funderburgh Eva Funderburgh is a ceramic artist located in Seattle, Washington. Coming from an education in chemistry and sculpture, she has focused herself on making strange whimiscal clay creatures. She works on exploring the colors natural to the clay and the finishing process of woodfire, and strives to present creatures that equally mix whimsy, mischief, and threat. Official website Facebook You might also like Comments Michael Dachstein Inspiration junkie :) Jakub Rebelka – Concept Art World Jakub Rebelka is a freelance illustrator, comics creator and concept artist working in both digital and traditional mediums. He has created illustrations for animated cutscenes for games such as The Witcher 2: Assassins of Kings and Shadow Warrior. Jakub is currently working with writer Yohan Radomski on a fantasy graphic novel titled City of Dogs. Link: shzrebelka.tumblr.com All images used with permission by the artist. © Jakub Rebelka or their respective copyright holder.