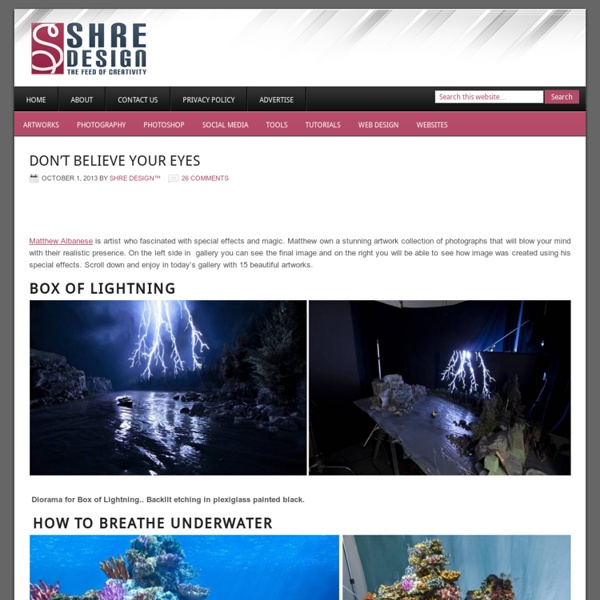 Matthew Albanese is artist who fascinated with special effects and magic. Matthew own a stunning artwork collection of photographs that will blow your mind with their realistic presence. On the left side in gallery you can see the final image and on the right you will be able to see how image was created using his special effects. Box Of Lightning Diorama for Box of Lightning.. How to Breathe Underwater Diorama made out of walnuts, poured and cast candle wax, wire, glitter, peanut shells, flock, plaster, wire, dyed starfish, compressed moss, jellybeans(anemones), sponges, wax coated seashells, toothpaste, clay, figs, feathers, Q-tips, nonpareils. A New Life Diorama made using painted parchment paper, thread, hand dyed ostrich feathers, carved chocolate, wire, raffia, masking tape, coffee, synthetic potting moss and cotton. Breaking Point Diorama made out of tile grout, cotton, phosphorous ink. DIY Paradise Making clouds out of drug store cotton balls. After The Storm Everything We Ever Were

this isn't happiness™ Peteski INK ADDICTS AROUND THE WORLD UNITE – 50 PHOTOS Calling all tattooed humans. LIKE this post and share the love with your homies. Plenty more after the jump… Grab a Luxury Cruise at up to 80% Off Last Updated: 4/06/2014 21:24 PST A luxury cruise is one of life’s pure joys. Today’s modern cruise liners are engineering marvels; floating 5-star hotels that offer the best service, accommodation, cuisine, and activities. They visit exotic locales, with non-stop relaxation or stimulation, depending on your pleasure. Over the past few years, cruise companies have spared no expense and literally invested billions in jaw-dropping super ships. Even if you’ve cruised before, you probably have not experienced anything like these new marvels. But, the best news is that due to the slowdown in travel caused by the recession and significant overcapacity in the industry, savvy travelers can now book once-in-a-lifetime cruises at insanely low prices. How does 80 percent off the brochure price sound? Founded more than 25 years ago, Vacations To Go realized that taking a cruise vacation was a new experience for many. But, what about the discounts?

Advertised beer deals at local grocery, liquor and drug stores - SaveOnBrew 200++ Photoshop Photo Effects EmailEmail Have you ever wonder where is that photo effect tutorial you saw the other day and start searching all over the internet but couldn’t find what you saw initially? Honestly, i have. That is why i throw them all into this article instead. But i also use these article to gain inspiration on what to do with my photo image. Sometimes we are like a lost bird when it comes to creative design. Create a Powerful Mental Wave Explosion Effect Photo to Pencil Sketch Effect Sin City Style Effect How To Make Your Own Vector Portraits Tutorial: Good and Evil Photo Effect The Making of Mystic Effect Transform A Person Into An Alien Effect Reflective Bubbles Effect Crack and Peel Effect Expressive Lighting Effect Displacement Effect Vector Composite Effect from a Photo Easy Watercolor Painting Effect Twins Effect Apple Style Portrait Effect Compositing Effect Dimension Effect Blue Glow Dreamy Effect Ink Drops in Your Digital Compositions Effect Super Slick Dusky Lighting Effect Electrifying Energy Beams Effect

MIT's self-assembling robots bring us one step closer to real-world Transformers The future of robots is modular, self-assembling, and kind of scary. Researchers at MIT are working on M-Blocks, tiny, cube-shaped robots that seem only steps away from recreating scenes from Terminator 2 or Transformers. The robots, which have no external moving parts, can propel themselves in any direction and can form themselves into stacks to create structures. The tech beyond the movements is simple, but smart: In every M-Block is a tiny, super-fast flywheel that, when braked, creates angular momentum to move the device in any direction. The robot is then able to cling to others nearby via the series of magnets embedded on each of its sides. While the M-Block is already pretty impressive, the researchers are already thinking up ways to significantly miniaturize the technology, which should unlock the robot’s real potential.

Anamorphic Sculptures London-based artist Jonty Hurwitz creates ‘Anamorphic Sculptures’ which only reveal themselves once facing a reflective cylinder. Hurwitz took an engineering degree in Johannesburg where he discovered the fine line between art and science. He has lived in England for many years, working in the online industry though he quietly levitated into the world of art inspired by a need to make ‘something real’. Hurwitz discovered that he could use science as an artistic paintbrush. All images © Niina Keks, Otto Pierotto, Richard Ivey

ol Street Art & Inventive Urban Art - Mr Pilgrim Graffiti Artist Collection of Inventive Urban Art & Cool Street Art One of the great things about cool street art is how inventive and original it can be. It can be incredible how some people perceive the world and can create something seemingly out of nothing. It is the essence of opportunistic art and is often the most quoted and memorable pieces. Not all of the pieces I have included are created like this but are equally inventive and original. See more cool street art, inventive urban art & graffiti art online on Mr Pilgrim’s google plus or facebook pages. Zilda