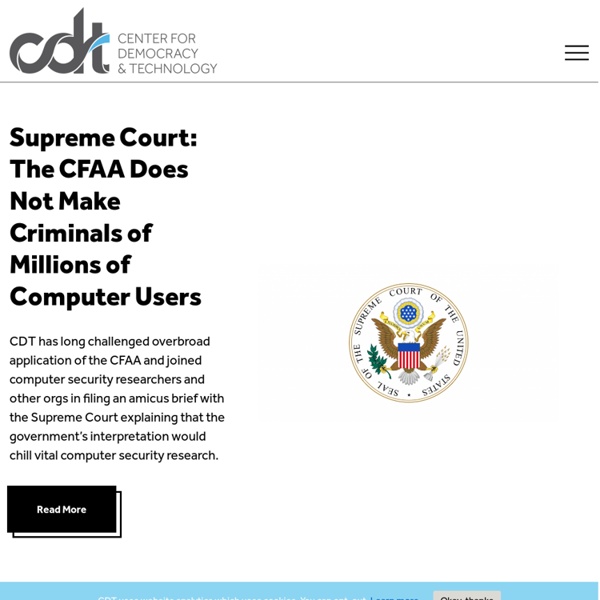 Get Involved Stay on top of the latest technology policy updates. Sign up for announcements, action alerts, in-depth public policy analysis and a monthly e-newsletter. Get involved by staying informed. Signup for Email Updates NSA Surveillance

Manic Pixie Dream Girl The "Manic Pixie Dream Girl" has been compared to another stock character, the "Magical Negro", a black character who seems to exist only to provide spiritual or mystical help to the (white) protagonist. In both cases, the stock character has no discernible inner life, and usually only exists to provide the protagonist some important life lessons.[3] Examples[edit] The Global Internet - Internet Law Program 2011 Overview Thursday, 2:30-3:30pmFormat: Lecture, featuring guest respondentsLeads: Herbert Burkert and Urs GasserParticipants: Catharina Maracke, Susan Crawford, others TBD In the global online space, traditional legal frameworks, such as public international law and international private law, come together with new developments, such as evolving Internet law (focused on new regulations addressing international Internet issues), to create different models for, and forms of, digital governance.

Deep packet inspection There are multiple ways to acquire packets for deep packet inspection. Using port mirroring (sometimes called Span Port) is a very common way, as well as an optical splitter. Deep Packet Inspection (and filtering) enables advanced network management, user service, and security functions as well as internet data mining, eavesdropping, and internet censorship. Although DPI technology has been used for Internet management for many years, some advocates of net neutrality fear that the technology may be used anticompetitively or to reduce the openness of the Internet.[2] The Tsunami of Smartphones in Computer Forensics Two years ago, I began to say in lectures that we had seen a 200% rise in the number of cell phones passing through our forensics lab. Today, I am beginning to say that the increase is more like 500%. As a society, we seem increasingly to regard our cell phones as an appendage of our bodies. To confirm our addiction to our phones, Nielsen recently conducted a study which offers some interesting stats.

everything-i-wish-id-known-during-a-decade-of-painful-sex_b_7850938 Dear Chloe, You're going to lose your virginity tomorrow. That's the expression you use, because although you're a baby feminist, although you read The Beauty Myth and The Feminine Mystique in 11th grade and have spent the last year cultivating a healthy sense of feminist outrage about body image and sexual violence and many, many other things (seriously, ask your parents and friends how fun you are to hang out with), you haven't yet realized how silly the terminology of "virginity loss" is. Like, Oops! Commotion = The Commotion Wireless Project proposes building a 'device-as-infrastrucure' distribution communications platform URL = "Democratic activists around the globe will gain access to a secure and reliable platform to ensure their communications cannot be controlled or cut off by authoritarian regimes." [1] Venessa Miemis: "Commotion aims to build a new type of tool for democratic organizing: an open source “device-as-infrastructure” distributed communications platform that integrates users’ existing cell phones, WiFi-enabled computers, and other WiFi-capable personal devices to create a metro-scale peer-to-peer (mesh) communications network.

Digital Freedoms in International Law by Ian Brown, Douwe Korff Ian Brown University of Oxford - Oxford Internet Institute Douwe Korff London Metropolitan UniversityJune 14, 2012 Global Network Initiative, 2012 UK ISP TalkTalk Monitoring its Customers Online Activity Without Consent − ISPreview UK Broadband ISP TalkTalk UK could be about to incur the wrath of privacy campaigners after some of its customers spotted that their online website browsing activity was being monitored and recorded without consent. The situation has caused a significant amount of concern with many end-users worried about the impact upon their personal privacy. TalkTalk has since confirmed that the monitoring, which was first discovered on the ISPs discussion forum during the middle of July (here), is part of a future Malware/Security/Parental Guidance tool to be provided by Chinese vendor Huawei.

Happy Birthday Aleister Crowley! Happy Crowleymass, everyone! Aleister Crowley, thee Great Beast 666 was hatched from a dragon’s egg on October 12, 1875. The eccentric English mage, poet, painter and gourmet rice chef would be 140 years old today if, um, he could like live forever or something… As somewhat of a noted Crowley buff, I’m often asked “Where is a good place to start reading Aleister Crowley?” and this is a difficult question to answer because, in truth, you have to read, pretty much, all of it to make sense of any of it. Going down the Crowley rabbit hole is comparable, I think, to being a scholar of James Joyce because achieving a proper understanding of the subject takes years of study, decades even (and then what are you going to DO with all that arcane knowledge, anyway, smartass?).