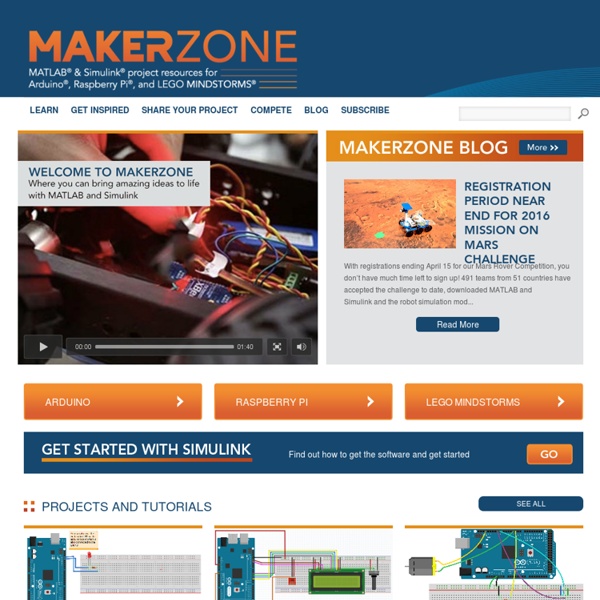 R/C LEGO® "The Bull" Buggy There are more than 20 models of LEGO®'s Dune Buggy type car, even more than the models in LEGO® Race Car category. Dune Buggy is usually four wheels drive off road vehicle, which would not be used on the road. Now that I got excited on the "dune buggy", and was also inspired by 1998 LEGO®'s Turbo Command 8428/8432 (See picture 6 and 7), I designed my own buggy, "The Bull" Buggy. "The Bull" Buggy is larger, and more complicate car to build than my two other LEGO cars, R/C Lego Car (or R/C Lego Car Redux) and Wireless Lego Car.

Tools FYI: We’re switching to a new website later this year. On the new site, Tool Submissions will work like Game Submissions (i.e. you can submit your tools). Presently this page is manually updated. Because of what’s coming, we will not be adding any more entries here, but if any links are broken do let us know. Want to know when Tool Submissions open? Sign up for the mailing list. LEGO Robotics - Applying STEM in the Classroom Halliburton and the Texas Tech University T-STEM Center in collaboration with the Whitacre College of Engineering, Electrical and Computer Engineering Department provided the opportunity for teachers to participate in a project-based learning curriculum centered on the 2012 Get Excited About Robotics (GEAR) competition challenge. During this five-day workshop, teachers began to build a solid foundation for moving robotics into more mainstreamed science, technology, engineering and mathematics curriculums. This website includes the curriculum used during the teacher workshop as well as serves as a basis for teachers to create their own LEGO Robotics programs. Throughout this curriculum, students investigate the components of LEGO robotics: LEGO Mindstorms NXT brick, LEGO Mindstorms Education software, design journaling, robot construction, programming and problem solving. This curriculum is designed for hands-on learning and the activities can be modified to fit any grade level.

Arduino Sensors Show Price: $84.95 Back Order Item #: ASM-PIXY-CAM - Vision Processing is a lot of work - even low resolution camera can output lots of data, and parsing through that data can be a lot of work. Palm Arduino V3 I design and create this Palm Arduino V3 prototype PCB, as I was tired of recreating Arduino Compatible on perf board every time I prototyping a new project, especially when I had to spend a lot of time tracing the wiring to see that I made the right connection. I design this Palm Arduino (version 3) prototype PCB to be encased by Lego bricks, especially Lego Technic Bricks, for the reason that I was hooked by the Lego after my first Lego project - R/ C Lego Car. And I am working on a couple projects that are using Lego Technic components with Arduino. (I will post instructables as the project is ready to post.) Also, I want to be able to use Palm Arduino in wide variety fashions.

4 Powerful Tools from Google to Teach Kids Coding January, 2015 Coding is becoming one of the essential literacies in the 21st century education. There is a growing demand now for teaching students how to code. In his wonderful TED talk titled "Let's teach kids to code", Scientist Mitch Resnick made this beautiful analogy : MIT Printable Robot The robot's design is based upon the idea of foldable robots - the 3D robot is made from a patterned 2D sheet, which is folded and then equipped with actuation mechanisms and electronics. This allows the robot to be created quickly at low cost and assembled easily, providing a platform on which students can experiment and learn about robots. For the AFRON 2013 design challenge, improvements have been made to the SEG's hardware in order to use a standard low-cost computing platform and make it more robust and adaptable, allowing for the easy addition of new sensors or other accessories. The software has also been overhauled to make it more accessible to first-time programmers and easy to use for any robot enthusiasts. Finally, a curriculum has been developed which teaches students the basics of behaviors and Finite State Machines while guiding them to implement these concepts on the SEG.

Ultra-Affordable Educational Robot Project - African Robotics Network (AFRON) With support from the IEEE Robotics and Automation Society, AFRON is leading the "Ultra Affordable Educational Robot" Project: to collaboratively design robots that can inspire young children worldwide about Science, Technology, Engineering, and Math. The project engages interested students and engineers, in Africa and worldwide, in designing such robots that are an order of magnitude less expensive than existing products. The first phase, in Summer 2012, was the "$10 Robot Challenge" In September 2012, ten highly innovative and inexpensive designs (and six Honorable Mentions) were announced at Maker Faire New York and reported in WiRed, IEEE Spectrum, Popular Mechanics, and Slashdot and featured in a Design Exhibit at UC Berkeley. AFRON is currently developing the second phase of the Ultra Affordable Educational Robot Project. The project received a "Tribeca Disruptive Innovation Award" in New York in May 2013.