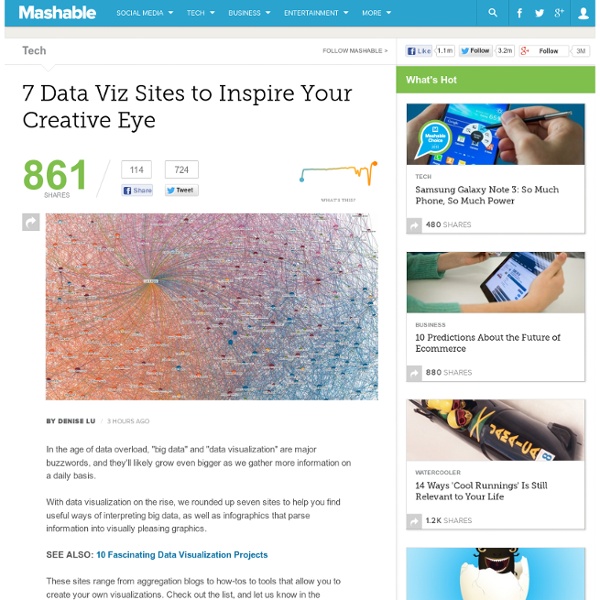 In the age of data overload, "big data" and "data visualization" are major buzzwords, and they'll likely grow even bigger as we gather more information on a daily basis. With data visualization on the rise, we rounded up seven sites to help you find useful ways of interpreting big data, as well as infographics that parse information into visually pleasing graphics. These sites range from aggregation blogs to how-tos to tools that allow you to create your own visualizations. Check out the list, and let us know in the comments below what your favorite site is for data visualizations. 1. Flowing Data Image: Flowing Data Statistician Nathan Yau edits Flowing Data, which is one of the most popular sites for infographics aggregation. Flowing Data also features tutorials on how to make useful graphics and how to use the tools to do so. 2. Image: Information is Beautiful 3. Image: Visual.ly Visually is a community platform for data visualization. 4. Image: Information Aesthetics 5. 6. 7.

Circos Table Viewer - Circular Visualization of Tabular Data // with Circos - Circular Genome Data Visualization Before uploading a data file, check the samples gallery to make sure that your data format is compatible. Your file must be plain text. Your data values must be non-negative integers. Data must be space-separated (one or more tab or space, which will be collapsed).

50 Informative and Well-Designed Infographics It’s impossible to comprehend complex data or analyze large amounts of information, if we only use words or texts. Information graphics or better known as infographics are visual explanation of data, information or knowledge. These graphics are excellent visual tools for explaining huge amounts of information where complex data needs to be explained immediately and clearly. The 20 best tools for data visualization It's often said that data is the new world currency, and the web is the exchange bureau through which it's traded. As consumers, we're positively swimming in data; it's everywhere from labels on food packaging design to World Health Organisation reports. As a result, for the designer it's becoming increasingly difficult to present data in a way that stands out from the mass of competing data streams.

Three tips for newspapers getting started in data journalism To cultivate a loyal audience in today's media environment, newspapers must do more than simply churn out stories. Editors and their newsrooms should create usable products, like data-driven news and information tools, to serve their readers, said Knight International Journalism Fellow Justin Arenstein at the World Editors Forum in Bangkok during his master's class for editors. Data journalism is “no longer just entertainment and no longer just voyeurism but creating decision-making tools based on news reporting,” said Arenstein, according to the International News Media Association (INMA). Here are a few tips for newspapers getting started with data journalism, gleaned from INMA's summary of the session:

Where Did My Post Go? (beta) Where Did My Post Go? (beta) I am a bot that posts GIFs generated from the reblog networks of posts that you submit home Submit a Post archive About Contact Submitted Post Reblog network of an original tumblr post by mithupaajii DataViz: Programming languages, toolkits and libraries This is part of a series of posts to share with readers a useful collection of some of the most important, effective and practical data visualisation resources. This post presents the range of data visualisation programming languages, toolkits and libraries, sometimes used in isolation, often used in partnership to accomplish specific functions. Please note, I may not have personally used all the packages or tools presented but have seen sufficient evidence of their value from other sources.

The Internet map The map of the Internet Like any other map, The Internet map is a scheme displaying objects’ relative position; but unlike real maps (e.g. the map of the Earth) or virtual maps (e.g. the map of Mordor), the objects shown on it are not aligned on a surface. Mathematically speaking, The Internet map is a bi-dimensional presentation of links between websites on the Internet. Every site is a circle on the map, and its size is determined by website traffic, the larger the amount of traffic, the bigger the circle. Visual Literacy in an Age of Data Statistician Hans Rosling inserts himself into charts during a TED talk and creates a narrative around the data. Shazna Nessa explains visual literacy and why it’s critical for data visualizers to take it seriously. It’s not what you look at that matters, it’s what you see. —Henry David Thoreau Data visualization work in journalism has been flourishing over the past few years both to find and analyze data for investigative purposes and to present information to the public. I have spent over a decade in newsrooms, first making interactive graphics myself and then overhauling and overseeing graphics, interactive, and multimedia teams.

Scientists Say Infographics Can Save Morons From Themselves. Really? It’s a sad fact of our cultural moment that anyone can marshall their own "facts" to support just about any argument or political position imaginable. (Thanks, Internet.) What’s worse, psychology studies have shown that rebutting factually impoverished arguments with actual facts has precisely the opposite effect one would hope: it actually makes people cling even tighter to their fictions.