Greatest Books Ever Written - Esquire's 75 Books Every Man Should Read 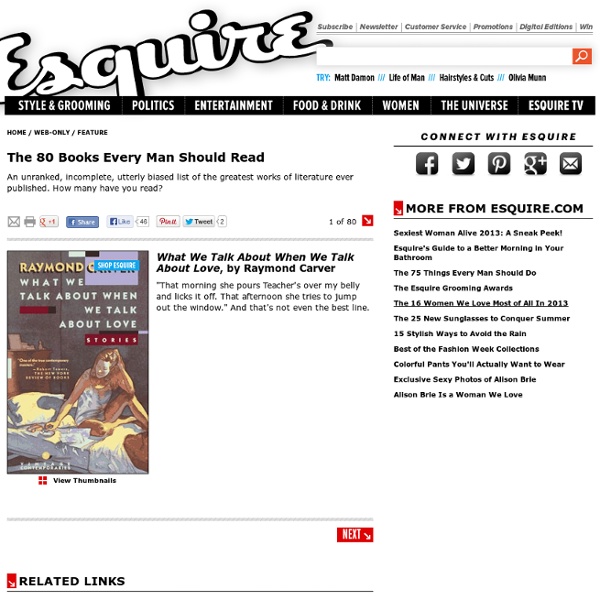 100 Best Novels « Modern Library ULYSSES by James Joyce Written as an homage to Homer’s epic poem The Odyssey, Ulysses follows its hero, Leopold Bloom, through the streets of Dublin. Overflowing with puns, references to classical literature, and stream-of-consciousness writing, this is a complex, multilayered novel about one day in the life of an ordinary man. Initially banned in the United States but overturned by a legal challenge by Random House’s Bennett Cerf, Ulysses was called “a memorable catastrophe” (Virginia Woolf), “a book to which we are all indebted” (T. S. Click here to read more about ULYSSES THE GREAT GATSBY by F. Set in the Jazz Age, The Great Gatsby tells the story of the mysterious millionaire Jay Gatsby, his decadent parties, and his love for the alluring Daisy Buchanan. A PORTRAIT OF THE ARTIST AS A YOUNG MAN by James Joyce Published in 1916, James Joyce’s semiautobiographical tale of his alter ego, Stephen Dedalus, is a coming-of-age story like no other. LOLITA by Vladimir Nabokov U.S.A. In E.

The 100 Best Books of All Time Many publishers have lists of 100 best books, defined by their own criteria. This article enumerates some lists of "100 best" books for which there are fuller articles. Among them, Science Fiction: The 100 Best Novels (Xanadu, 1985) and Modern Fantasy: The 100 Best Novels (Grafton, 1988) are collections of 100 short essays by a single author, David Pringle, with moderately long critical introductory chapters also by Pringle. For publisher Xanadu, Science Fiction was the first of four "100 Best" books published from 1985 to 1988. The sequels covered crime & mystery, horror, and fantasy. Lists[edit] See also[edit] References[edit]

The Books That Changed Your Lives I have a feeling that many of these are favourite books rather than life-changing. Certainly I love "The Hitch-hikers Guide .. Jared Diamond's book is very interesting but hardly life-changing. In my opinion "2001: A Space Odyssey" had a huge effect on the way people perceive the benefits of science, undermining the positive attitude created by the Apollo program. "1984" had the biggest effect on me, changing my view of government, communication and words. I have read but cannot recall much of "Zen ..." but you have inspired me to pick it up again and the two Dawkins books are waiting on my "to be read" pile.

The 10 Greatest Apocalyptic Novels Of All Time After scouring book reviews and Wikipedia, a list of the Top Ten Best Apocalyptic Novels was born. The books on this list take you down the darkest paths in uncivilized worlds, from cannibalistic gangs to vampire infected corpses. If this list doesn't get you thinking on the quickest way stock your basement full of water, canned goods and rifles, I don't know what will! Enjoy! World War Z Documenting the war on zombies, "World War Z" takes you through horific times with some of the most vivid writing this genre has ever seen. "World War Z" paints such a realistic picture of a world after Zombies that even skeptics would find themselves engrossed in the novel! Blindness Forget world wide pandemics of flesh eating bacteria or a zombie illness! The family unit escapes and attempts to build a new life in the outside world, just as sight is returned, just as quickly as it was taken away. I don't know who I felt worse for reading this book. The Road The Postman Oryx and Crake Alas, Babylon Swan Song

In Defense of Human Rights: A Non-Religious Grounding in a Pluralistic World (Routledge Innovations in Political Theory) (9780415479691): Ari Kohen Books Every Social Entrepreneur Should Read Books take us on an incredible journey—sometimes real, and sometimes not—that hopefully encourage us to be creative, to realize what is possible, and to imagine new possibilities. What books inspire you? What books have really stuck with you? We asked the 2011 Echoing Green Finalists these questions and they shared books ranging from fiction, to how-to, to nonfiction and childhood favorites. Our colleagues have also generated some wonderful collections: Change.org took an interesting angle, sharing five history books social entrepreneurs should read: Fund’s list, quite appropriately, concentrates on those books that focus on the bottom of the pyramid: has two lists, no less! So, what’s on your list? Photo by Paul Watson.