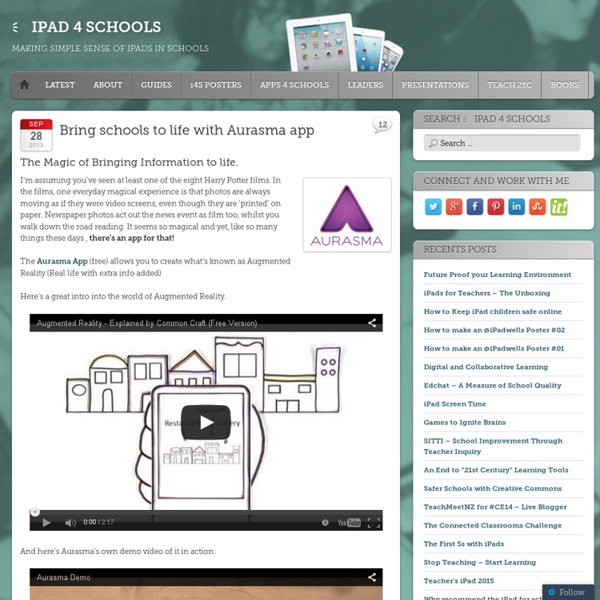 The Magic of Bringing Information to life. I’m assuming you’ve seen at least one of the eight Harry Potter films. In the films, one everyday magical experience is that photos are always moving as if they were video screens, even though they are ‘printed’ on paper. Newspaper photos act out the news event as film too, whilst you walk down the road reading. It seems so magical and yet, like so many things these days , there’s an app for that! The Aurasma App (free) allows you to create what’s known as Augmented Reality (Real life with extra info added) Here’s a great intro into the world of Augmented Reality. And here’s Aurasma’s own demo video of it in action: Before I take you though how to make your own, let’s look at the potential uses for learning. Lets start with possible posters on the walls around your school or classroom that come to life and What about the school newsletters? The possibilities are endless! Getting started with your first “Auras” I will have a fun 2014 with this app.

Tons of Classroom Examples Using Augmented Reality with @Aurasma - A Complete How-To Guide! How to Use Augmented Reality in Your Classroomthis post is read best via a desktop due to the embedded video content Augmented reality allows someone to add another layer to an existing image. For example, imagine holding your phone over a poster on the wall as if you were going to take a photo of that poster, and then instantly a video starts playing to offer you additional information about that particular poster. Pretty cool, right? The first time it happens, it seems like magic. After watching the video below, I knew I had to figure this augmented reality thing out. Aurasma is the app I use to create augmented reality. Sharing Aurasma with My Husband's Colleagues Not only is augmented reality amazing, it's also free and easy to do. While waiting for our table to be called for dinner, we were discussing the nice decorations displayed around the reception hall. His colleagues began instantly brainstorming how this could be used for their business. Augmented Reality Vocabulary Step 1: